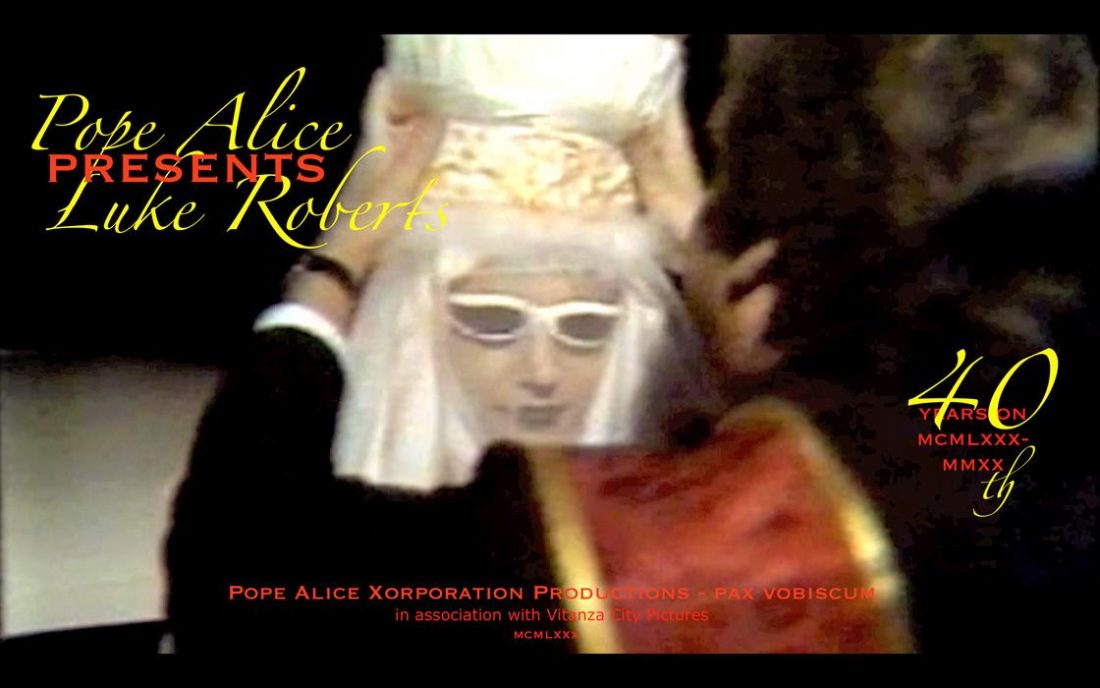 This September marks the 40th Anniversary of Pope Alice Presents Luke Roberts, a series of cosmically aligned events that took place in Brisbane, Australia in 1980. Her Divine Holiness Pope Alice appeared on mainstream media news (Channels 7,9,10) and Channel 10’s The Sargent Report. HDH blest pigeons in King George Square and distributed Iced Vo-Vos to curious passers-by. The events culminated with the opening of the exhibition, Pope Alice Presents Luke Roberts at the Spring Hill Gallery, where Pope Alice declared Uluru Australia’s Art Heart and Tasmania it’s Pubic Zone, with an expressed concern for proposed damming and shaving of the “Zone” by logging companies.

A video record of the exhibition opening is now screening online until the 13th of October celebration of this anniversary. Access the film here.

Pope Alice’s presence here on Planet Earth highlights the ageless questions: “Who are We?” “Where have we come from?” “Where are we going?”

Police were all about the place with guns and unmarked cars
Searchlights scanned the skies all night for Spiders here from Mars
The squeals from sirens went for miles around
On the night Her Popeness came to town.

Pope Alice signed her autograph, “To Luke My Biggest Fan”
And then She introduced him to her Cosmic Cowboy Band
His whole life spun round and upside down
On the night Pope Alice came to town

Related celebratory sightings of Pope Alice are currently happening throughout the city. These include a large Pope Alice (Pre-History) banner in Giffin Lane, CBD, a Palice Athena Wunderkammer display in the City Council Vitrine on Edward Street (cnr Elizabeth St), curated by McCathy-Swann Projects and an installation of Pope Alice’s headwear, A Head of Her Time, currently on show in Artisan’s Machinery Street window, curated by Cassandra Lehman. Griffith University Art Museum is planning a premiere screening of historic Pope Alice films and performance documents from its collection. The Powerhouse Museum (MAAS), Sydney has recently incorporated an early papal costume into its collection.