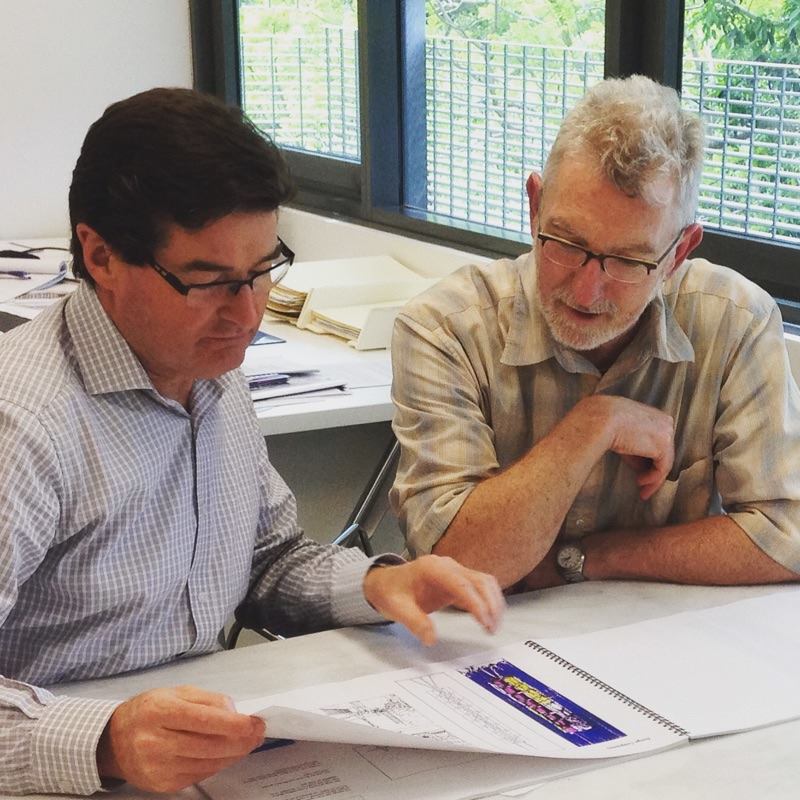 Ephemeral Traces is the forthcoming 2016 exhibition about the 1982-1988 artist-run scene in Brisbane.

Curator Peter Anderson ( pictured here with UQAM Director Campbell Gray)  is focusing on illuminating five key Brisbane-based artist-run spaces that together built on, grew and for an intensive and vibrant six years in the 1980’s, sustained and developed the momentum of earlier artist-run initiatives, spaces and projects.

Peter is also working in collaboration on the related but independent ARI Remix Project; an artist-run public archive about the 1980-1990 artist-run culture scene. The ARI Remix Project foregrounds artist histories rather than art history and includes many of the the 300 artists actively involved in the crucible years of Queensland based artist-runs as we know them today.

This independent and related digital communities and database art project is designed to compliment, broaden and extend the groundbreaking UQAM “Ephemeral Traces” exhibition. The first exhibition to extensively chronicle the diverse and inflected 1982-1988 Brisbane artist-run scene.

The ARI Remix Project and has been kindly seed funded by both Arts Queensland and the Australia Council and is in development now throughout 2015 until 28 December 2016. The ARI Remix Project is only possible with the immeasurable support, shared passion and enthusiasm and largely in-kind assistance of the many artists and artist collectives involved.

ephemeral traces provides the first comprehensive analysis of artist-run practice in Brisbane during the final decade of the conservative Joh Bjelke-Petersen government. The exhibition focuses on the scene that developed around five key spaces that operated in Brisbane from 1982 to 1988: One Flat, A Room, That Space, The Observatory, and John Mills National.

Drawing on artworks, documentation and ephemera, the exhibition provides a contextual account of this progressive artist-run activity, examining collective projects, publications and the spaces themselves, as well as organisations such as the Artworkers Union and Queensland Artworkers Alliance. A counterpoint to Michele Helmrich’s earlier exhibitionReturn to sender (UQ Art Museum, 2012) which focused on the artists who left Queensland during the Bjelke-Petersen era. This exhibition is about the artists who stayed.

You can also share your resources, comments and archives to the ARI Remix Project  hashtag above, thanks for sharing and assisting us enrich the internet with a broader, nuanced and truer account of Queensland Artist-run heritage.

The ARI Remix project gratefully acknowledges the assistance of both the Australia Council and Arts Queensland.