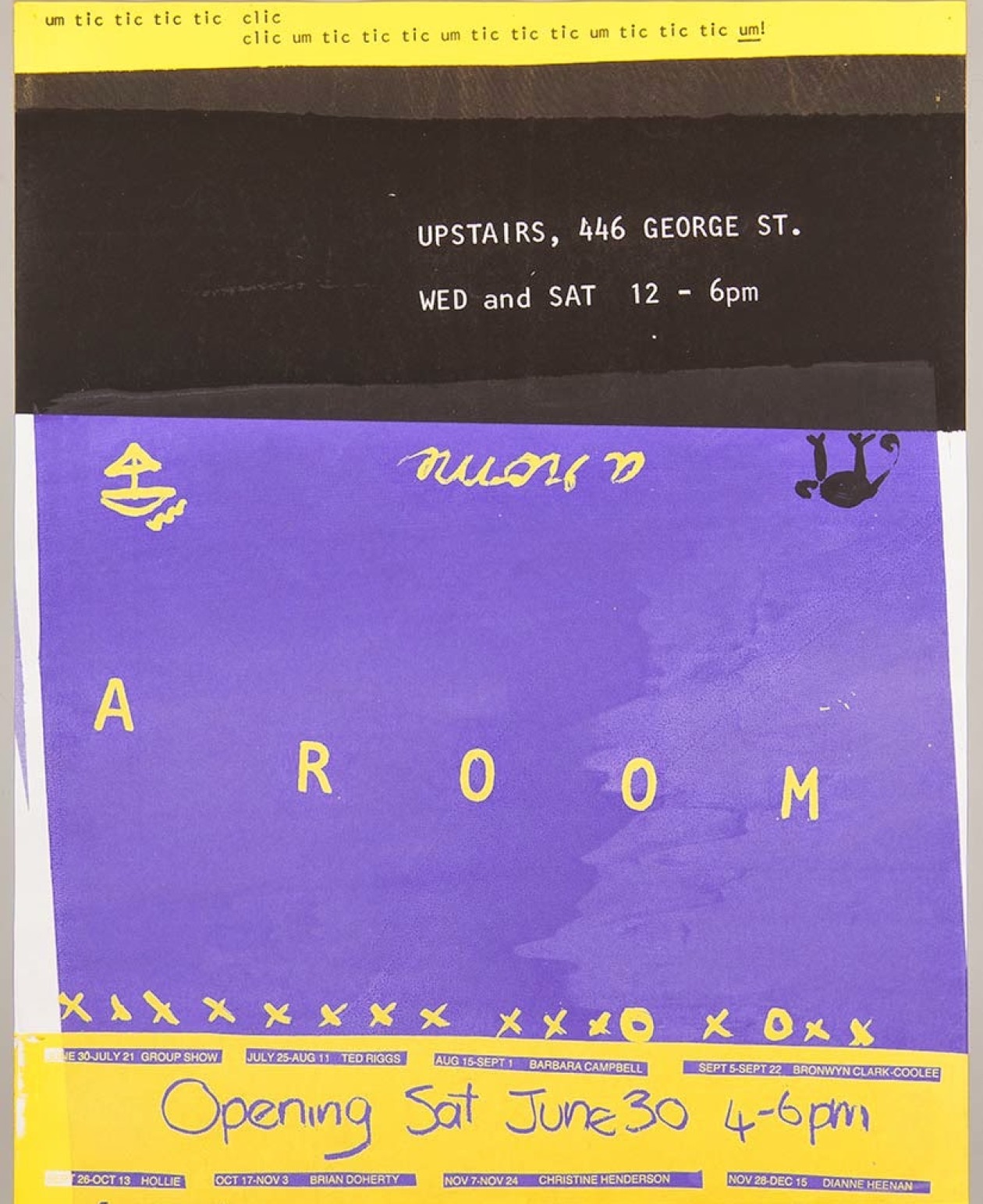 Strategic short-term, six month artist-run with added exhibition opportunities and documentation for artists. Inspired by Guest-Curator program auspiced by Barbara Campbell and Ted Riggs at the IMA 1981-1983 circa).

” In contrast to the complex network of activities linked to One Flat, the A ROOM project was a tightly circumscribed activity. A ROOM was set up in mid-1984 as ‘a seven-member exhibiting artel’. Over a predetermined six-month period (July–December 1984), it occupied two rooms in an office space above shops at 446 George Street in Brisbane’s CBD. One room was used as a studio, the other as a gallery. As one of the exhibition flyers for the project noted, a key objective of the A ROOM project was to provide a model that presented ‘few encumbrances for its members’, with the space operating without any formal ‘committee structure, constitution, [or] responsibility to membership or government grant’. As the name suggests, a functioning gallery simply required a room. The project began with a group exhibition of the collective, followed by a solo exhibition by each artist: Ted Riggs, Barbara Campbell, Bronwyn Clarke-Coolee, Hollie, Brian Doherty, Christine Henderson and Dianne Heenan. While there was no necessary stylistic or conceptual links between the artists within the collective, the project as a whole was in some ways a response to the changing circumstances within the alternative-spaces context; in particular, the division between a set of ‘flagship’ Contemporary Art Spaces and a wider group of (mainly unfunded) artist-run spaces.28
A ROOM was set up just a month or two after the appointment of a full-time director at the IMA in mid-1984,29 and, in many ways, it emerged from debates concerning how the alternative-spaces field might be organised, and how the different institutional structures might play a role in legitimising art practices. This was of particular significance for two of the collective members, Campbell and Riggs, who had been central to the IMA’s operation over the previous two years under the ‘guest curatorial program’.

As already noted, Brian Doherty’s installation in ephemeral traces reprises elements from his A ROOM exhibition, and works by Clarke-Coolee and Heenan are also directly linked to their exhibitions in this space.”