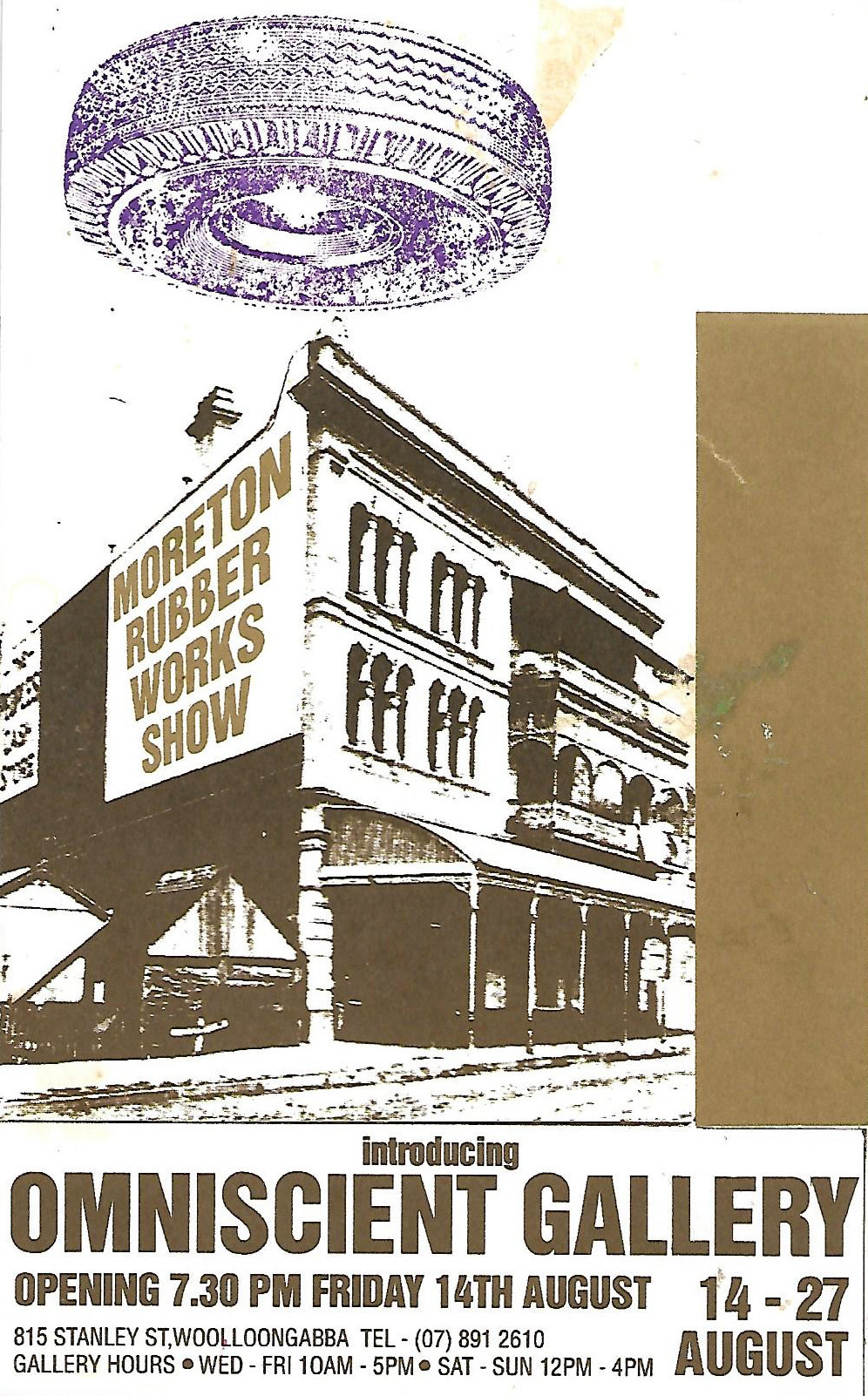 From 1989 -1992 I was an undergraduate student at UQ studying for a BA in Art History. A big part of my social life was going out to openings and experiencing all the different exhibitions that were showing in art-spaces around Brisbane. ARI’s were the spaces that exhibited interesting work by emerging artists and were exciting places to visit. It was at one of these ARI’s that I exhibited my artwork for the first time.

I remember coming across a flyer from Gallerie BRUTAL in May 1990 asking for contributions from artists for an exhibition called The Colour of Air. The theme intrigued me and I created a sculptural wall piece called Delitescent Epolism for the exhibition. The gallery was in a building in Fortitude Valley that also housed ISN”T gallery and artist’s studios.The IMA was located on the ground floor of a building nearby on the corner of Ann and Gipp’s Streets.

I went to the exhibition opening with my sister and everyone was really friendly and welcoming. The majority of the exhibitors were current students at QCA and It opened up a whole new world to me. A group of us went out to a club nearby dancing afterwards and it was a fantastic night.

I met a lot of my long term artist friend’s at these early Artist Run Initiatives. There was a shared sense of openness and freedom between the artist’s exhibiting in these spaces. From 1990 – 1996 I exhibited my artwork in BRUTAL Galleries, Omniscient Gallery, Boulder Lodge, BARTtleme Galleries, Bauhaus Gallery and Man Bites Pumpkin. These early exhibitions enabled me to exhibit experimental work using different media while I was discovering my own voice as an artist.

In August 1992 I collaborated with my sister to create a mixed media floor sculpture called The Gut to exhibit in the opening show at Omniscient Gallery. This gallery spread across a couple of rooms on the top two floors of the old Moreton Rubber Works factory on Stanley street in Woolloongabba. The openings were wild. Lots of performance art and music and so crowded, people were spilling out onto the street.

Later in Dec 1992 l was part of another show at Omniscient called LOCAL GRAIN FED BEEF. This was an exhibition of photographs by Kathleen Williamson and a calendar launch. I featured in the calendar as Ms December “Gritty Rawhide Randiness”.

My sister Fawnia Mountford had written a play called FRENZY which was performed in 1992 at the Warren Street Theatre. I helped with costume design for the play and it was here that I met Craig Ball who set up Boulder Lodge with the artist Joseph O’Connor. This gallery was in a room downstairs off the Brunswick Street Mall in Fortitude Valley.

Around this time I made friends with a group of artists who had studied in Toowoomba and had moved down to Brisbane. Some of these artists included Neil Degney, Rosz Craig, Kirsti Watson and Brad Nunn who had formed a collective called Atomic Artists. I met Edwina Bartleme through these friends and when Edwina set up BARTleme Galleries in an upstairs room in the Elizabeth Street Arcade, I was asked to contribute work to the following exhibitions during 1993 – 1995.

• THE GODDESS WITHIN in Feb 1994. I exhibited three woven sculptures called Clotho, Lachesis and Atropos.

• FiINALE in March 1995. I exhibited two Blood Dolls in the last exhibition at BARTleme Galleries.

I contributed work to the following WANDA projects:

• A FUTURE WITHOUT LIMITS in March 1996. An International Women’s day exhibition at QCA gallery.

• ViRGINS,VIOLETS,VAMPS : TRANSGRESSION in Sept 1996 which was launched at the Bauhaus Gallery in George Street.

• FETISH in June 1996 An exhibition of women’s fetishes at Man Bites Pumpkin an art /Fashion space in Fortitude Valley.

WANDA eventually disbanded as key members moved away to Melbourne and got involved in other adventures. Sadly this is the fate of most of the Brisbane ARI’s that I exhibited in during the early to mid 1990’s: Brutal, Omniscient, Boulder Lodge, BARTleme galleries and Man Bites Pumpkin all eventually closed for various reasons. As rents increased and suitable spaces became harder to find. But they all burned brightly for awhile and played an irreplaceable part in the history of Artist Run Initiatives in Brisbane.

The Butterfactory space was amazing. I loved going to parties there. The different rooms were filled with artwork and it had really tall ceilings in Sharon and Mark’s studio. It was a living art-space with so much creativity happening all the time. I moved into the old Cold Room and It was a wonderful experience to live there for a month. I created an Installation called Nesting that incorporated lots of organic material that I had sourced on-site and collected from Brisbane (Bamboo, leaves, coconut fibre, woven nests and sculptures). It was my first experience of creating an immersive Installation.

This was kind of an end of an era for me. I Left Brisbane in August 1999 to travel and live overseas for two and half years. When I returned to Australia I moved to Lismore in Northern NSW where I studied sculpture at TAFE learning to carve wood and work with clay. I am now back in Brisbane teaching art and continuing to enjoy making sculptures and exhibiting my artwork. As I write now I am getting ready to teach art and weaving workshops for Flying Artists in the Torres Strait Islands.

Lines in the Sand

Lines in the Sand