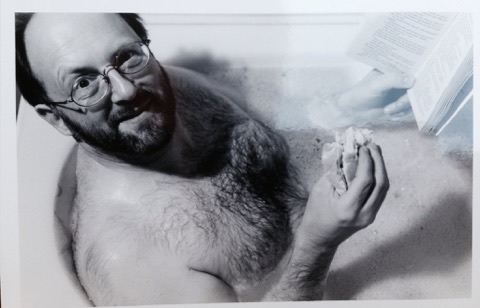 If, at an imaginary dinner party (held on benches and doors resting on trestles, covered with sheets and sarongs) I invited all the artists I’d known in Brisbane between 1983 and 2000, the discussion would surely reach a cacophony through which no single voice could be heard. The resulting revelations and conflicting accounts would probably force some to leave and others to rage on social media for months.

My table would rest on the wide concrete terrace of a rented Queenslander in Red Hill or Paddington. Fabulous figures from the arts would descend back stairs to the sounds of 4ZZZ and be greeted and seated before an assortment of candles and wine glasses. Back in the 80s the art community seemed small enough to imagine hosting such an event.

In the 80’s and 90’s, dinner tables in Brisbane restaurants and rentals formed the uneven playing fields for creative passions to ignite, collaborations to be formed, significant conversations to occur and unreliable memories to be recorded. It is unlikely that any reliable agreement as to what happened or was happening will ever emerge – however significant players did emerge. I use the term players because this was an era that valued Australian sport above and beyond all else.

In 1983, arriving in Brisbane from the UK, chilled and alone, I was greeted by visual invitations to ‘Get Wrecked on Great Keppel Island’ or ride a giant Coke-can down the dunes on Moreton Island. All I needed was an indestructible tan, a Seafolly bikini and some middle-class aspirations. From my scorching seat on the Ipswich to Caboulture and Brisbane to Cleveland trains, I watched refrigerated high-rises go up and ornate Victorian buildings and surf shacks come down.

Brisbane was a city so focused on foreign investment that art seemed to function merely as window dressing and Ken Done appeared to be creating most of it. Bemused but determined I decided to become a student at Queensland College of Art (QCA) in Morningside.

As an art student at QCA, the over-whelming mid-day heat and humidity in the campus rooms at Morningside Seven Hills, forced us to inhabit a nocturnal world of creativity. At night I joined the black scuttling bodies of Brisbane’s creative art community as they took up residence in city buildings awaiting demolition -’Art Spaces’. Then, like a sleepwalker, I moved between openings and events along pavements that echoed with the clatter of dazed Christmas Beetles, exposed in humid pools of neon light that hummed to an invisible chorus of cicadas.

I confess, very few of my memories from this time seem real and as the black and white photos from this digital archive suggest; we were youthful ghosts that haunted spaces that no longer exist. Ghosts that retain memories that yearn to be recorded.

I remember finishing work in the Wintergarden late one night during Expo 88. Edward street was dark and empty, but the Queen Street Mall was inviting with fairy lights decorating the mock orange trees that gave privacy to dinners in ‘Jimmy’s on the Mall’. Flanked by the sound of clinking wine glasses and Aussie rock, I stood underneath the large clicker board in the centre of the Mall, with its lines of plastic tablets noisily rotating to update sports results, the time, temperature and humidity. Instead of revealing a sports update, I watched it slowly form a five metre reproduction of one of my portraits (courtesy of the digital skills of Computer Artist Adam Wolter and the artists who had formed the Queensland Artworkers Alliance(QAA) in 1986).

During that surreal percussive moment, I realised the conditions for making art in Brisbane were finally changing; Brisbane artists were now visible in Brisbane.

Thanks to the hard work of Brisbane Artists from the 80s and 90s, who went on to became administrators and academics, staying in Brisbane as a professional artist is now a reality. And, even though many of us returning to Brisbane are unrecognisable from the photos in this archive, it offers us a stimulus, a place to revisit the promises we made and the plans we hatched…

Like my promise to create a charcoal portrait of the artist, sound poet and academic Nick Zurbrugg. When I was planning this photo (above) I asked him how he’d like to be portrayed. He said; “In the bath of my West End house, eating a ham sandwich while enjoying a cheap detective novel.”

Perhaps it’s these unfinished tasks that give me a way back to the people and places I miss, to find who I was and what I loved.