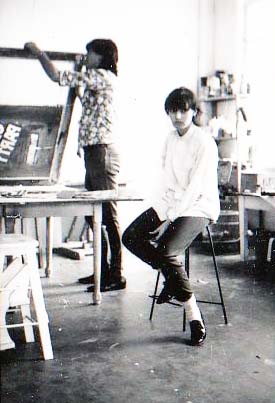 I called myself a Painter from the early eighties to the late nineties. However, that would be a misnomer now, as I haven’t really touched a paint brush since 1998. I am a Photographer.

After graduating from Queensland College of Art in 1986, I found some studio space in Fortitude Valley and focused on my life as an Artist. I shared this space with three other emerging Artists for about a year before relocating to a studio above an arts supply shop in Elizabeth Street in central Brisbane city. This new location made it easier for me to interact with other Artist friends within the CBD. From here I made strong connections with THAT Contemporary Art Space, where I was involved in several group projects.

Painting was my full time ‘occupation’ from 1987 to 1989. However, I also worked part-time in the office of ‘Eyeline’ Art Magazine, and wrote some article and reviews for this and other periodicals. Apart from my graduate exhibition (1987), other major shows that I was involved in during this period were Sex/Object (1987), the Livid Festival art show (1988) and Axis-File, Sites of Dis-Closure (traveling exhibition, New York and London, 1988).

I moved to Sydney in 1989, where I alternated between painting, working in art supplies shops and traveling overseas. Since 1999, I have lived in Sendai, Japan, working as an English teacher, except for three years from 2004 to 2007 when I returned to Australia. My last painting exhibition was in Sydney in 1996. However, in desperate need for a creative outlet, I have been trying my hand at photography for the past three years.