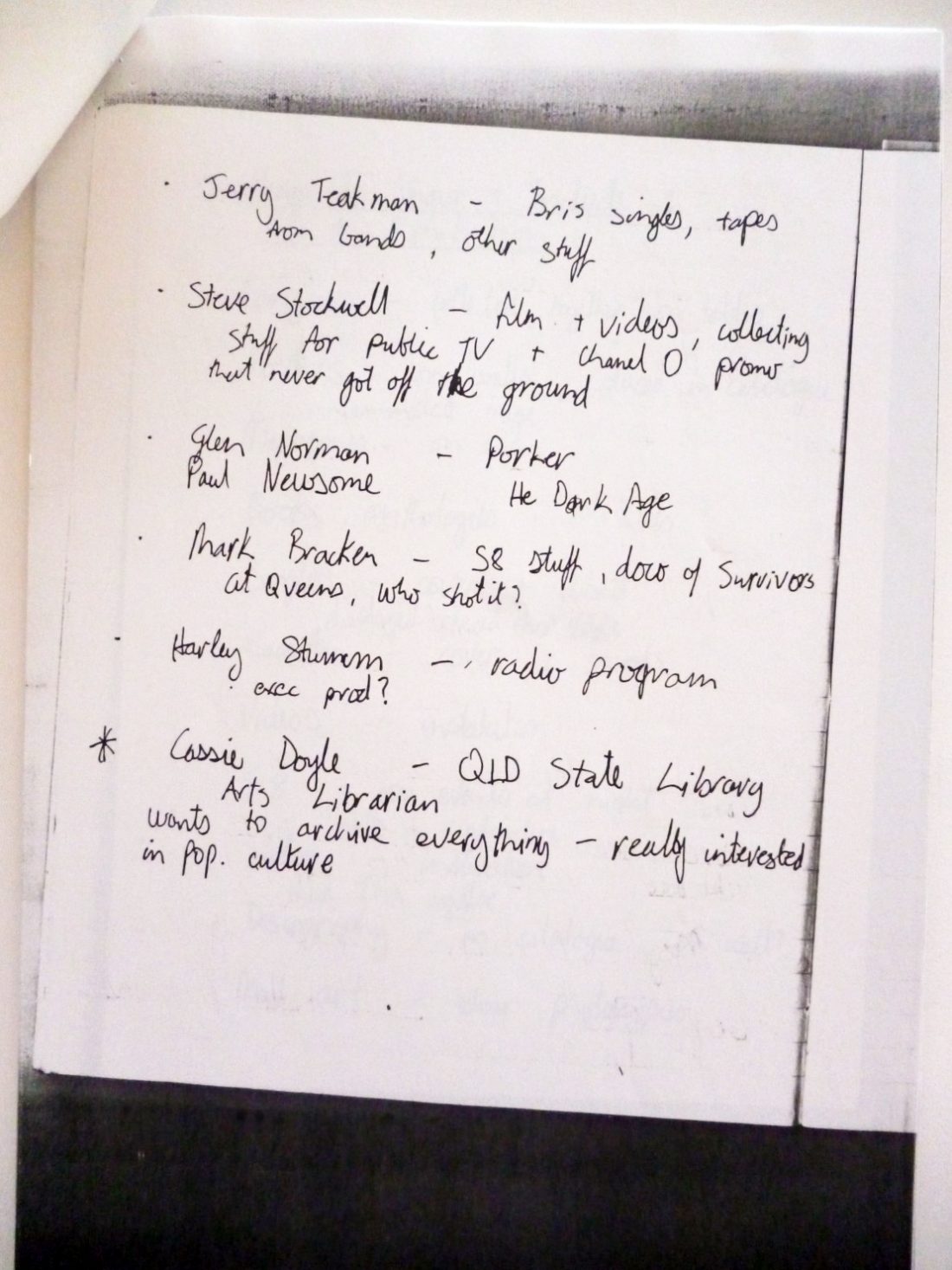 Back in 1986 I wrote an essay for the catalogue that accompanied the exhibition “Know Your Product”, curated by Ross Harley for the Institute of Modern Art (September 11-27, 1986).

The exhibition, which focused on the complicated overlaps between music, art and other cultural practices, was an early attempt to make sense of what had been going on in Brisbane ‘youth culture’ in the late 70s and early 80s. It was an exhibition that was full of posters, flyers, single covers and cassette tapes. There was a party to kick it off, a concert, a super8 film screening and even a suite of 10 radio programs about the local music scene produced and presented on 4ZZZ. In amongst all this colour and movement my essay was perhaps a little dry, even a bit academic. Titled “Lists of Ordinary Things: The Materialisation of Memory” it was perhaps a little too focussed on the question of how the story might be told, rather than trying to tell it.

At the time, that story had barely slipped out of the present, posters included in the exhibition were probably still clinging bravely to brick walls, and our ears were still ringing from the assault of various punk bands. And here I was banging on about the difference between a ‘good story’ and the archive, about the difference between a narrative and a list. When I did get down to the subject matter of the exhibition I found myself comparing a number of early 4ZZZ Hot Hundred lists, comparing the 1976 list with the latest list from 1985. It was a quick paragraph that attempted to capture the dramatic shift from a list with no local product and The Beach Boys’ “Good Vibrations” at number one, to a list with much more local content  – including unreleased ‘demo-tapes’. In less than 10 years everything from the first hot hundred had slipped away, and music seemed to have changed forever.

Walking through the exhibitions associated with LIVE that opened at the State Library of Queensland last weekend, I was reminded of the fact that I’d been thinking about the archive and the role it plays in the stories we tell – the history we write – and the way the same problems confront my current project for a long time. As I wrote back in 1986 … “one of the first things that any writing about the past must contend with, is the fact that any writing ‘about the past’, can only deal with the material that is available now; with the past as it is constituted in the present”. What are those traces of the past? Where are they?

My starting point has been the Australian Library of Art’s artist’s ephemera archive, an archive that was begun in the early 1980s, by the then Arts Librarian, Cassie Doyle. It’s a complicate mixture of materials that might, in the usual course of events, end up in the waste paper basket – invitations, flyers, price lists, photo-copied posters and other bits and pieces. But it is out of these rare material traces that it is possible to begin to map out the shape of an art scene, just as similar materials are drawn on to provide the broad sketch of the Brisbane music scene in the LIVE exhibitions. Perhaps it is those things that are made for the moment that give us the clearest view – not only providing information, but a sense of the energy, the look and feel of the time. And now today, looking back through the archives of the IMA, in a folder full of material related to “Know Your Product” I came across a photocopy of Ross Harley’s lists and working notes related to the exhibition … and there it is … “Cassie Doyle – Qld State Library Arts Librarian … wants to archive everything – really interested in pop. culture”. Hey … librarians rock!