Q: How and when did Bureau Artspace begin?

Queensland Artworker’s Alliance secretary Lindy Johnson kindly contacted artist Jane Richens and myself in August September 1988 about the possibility of a lease in the City Plaza complex in Adelaide Street for a new artist-run space and studios.

In turn Jane and I contacted artist/artist-run colleagues Virginia Barratt, Hiram To, Diena Georgetti, Jeanelle Hurst about forming a group to run and manage the space, we held several meetings, contacted other artists who might be interested in collaborating too, artists including Angelina Martinez, Joseph O’Connor, Gary Warner, Peter Callas, Linda Wallace, Ross Harley, Micheal Hutak, formed a plan and an easy to manage short term exhibition schedule and in December 1988 we opened Bureau Art Space for a three month gallery and events program. It was opened by Doug Hall, then Director of the Queensland Art Gallery on Friday night December 16 1988. 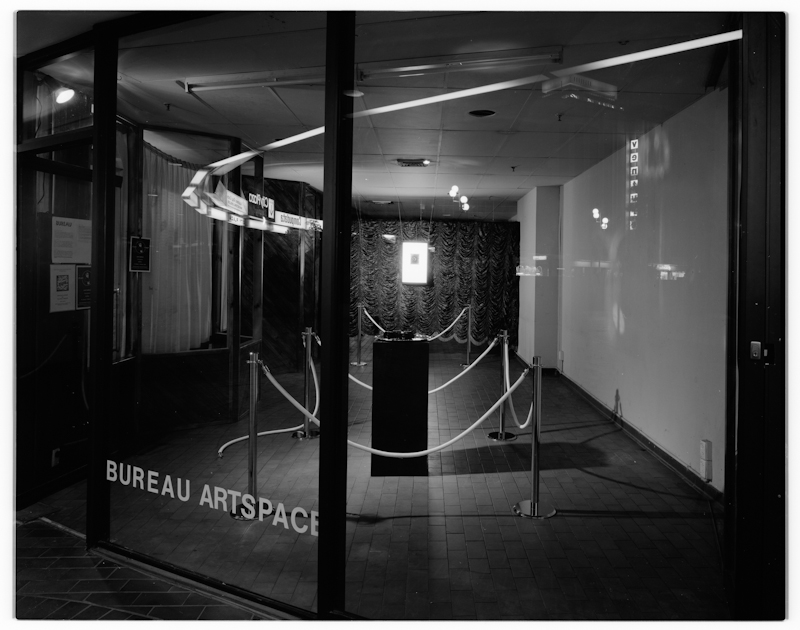 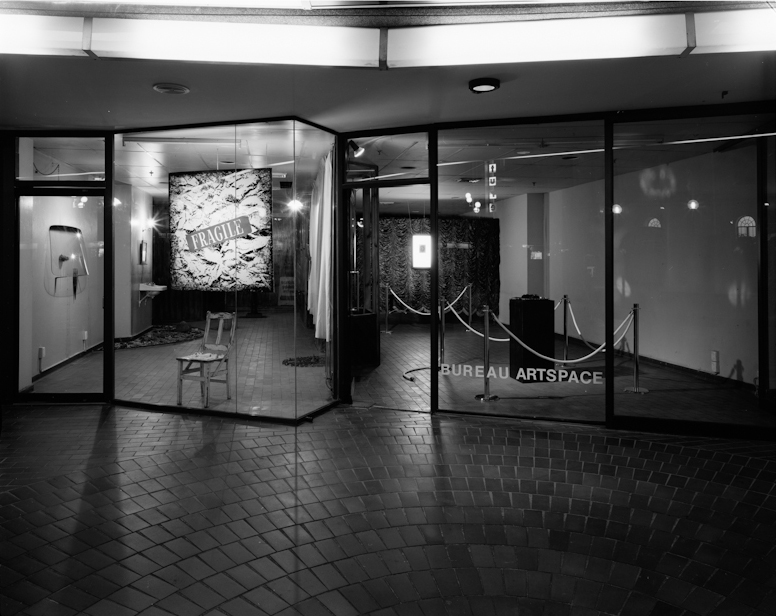 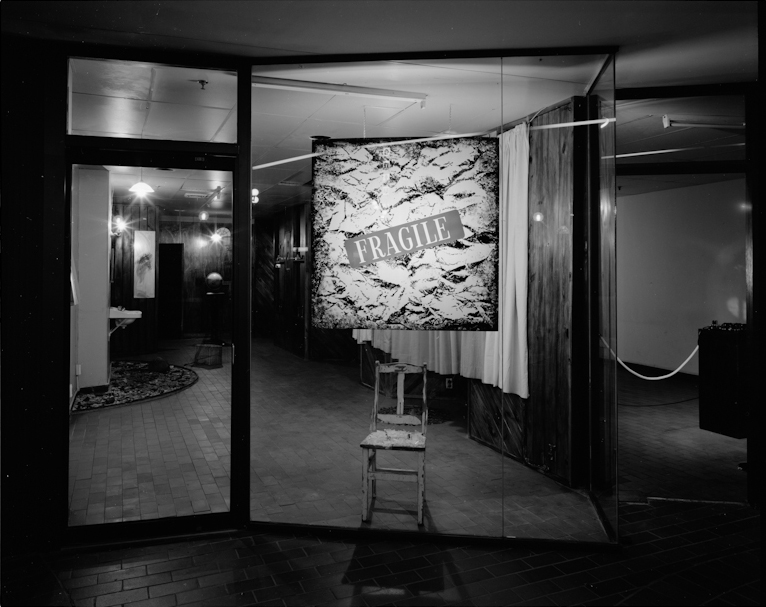 Q: What was the artist-run context like in Brisbane at the time?

Jay Lehan and I had recently returned from the AXIS Art Project networking and professional development work in New York and London and at the time in Brisbane Arch Lane Public Art an artist-run located off Macrossan off Adelaide Street with Directors Belinda Gunn and David Holden was almost a year into their artist-run program and was at the time the only “official” artist-run space operating aside from Imagery Gallery located in South Brisbane which focused on photography in their program. Jay and Lehan both had full time photographic teaching commitments and decided not to be involved. I was feeling keen to run another artist-run in collaboration, collaboration is the only way to make small miracles happen. By way of interest several months later in 1989 Galerie Brutal in Gipps Street in Fortitude Valley and The Photographer’s Gallery in Elizabeth Street artist-run spaces started operating.

Q: What were some of the key motivations behind starting the space and artist studios?

Stocklands had very kindly offered us a rental free space, amazing, unheard of and miraculous, this was THE key motivation, were were all so grateful that finally a corporate sponsor was keen to make an artist run space collaboration an inner city reality. We had always had to pay rent for the short term spaces that were at one point readily available throughout the early years of the 1980s.

Access was a major thing for us, we had all long been committed to the idea at the various artist-run spaces we had run over the preceding six years that “the public” could access both the artist studios and the galleries located throughout the city and the valley. It was important that the art making process was accessible, clear and transparent, so that the experience of art was a shared, broader, truer one. We wanted to debunk the romantic idea of artists being secreted away as heroic, private, secluded, solipsistic beings, and not participating with their art and its use in the tumult of the outside world.

We didn’t use 1960s, 1970s words like underground or experimental in the artist-run work we did, we did use words like access, alternative, unorthodox or artist-run spaces, as we needed art to be democratised, vibrant, public and easy to experience as a vital part of the everyday world.

And the very nature of this shop front gallery and a great lighting system; once a cheesacake shop from memory that I would frequent in the late 197o’s and early 1980s with my mum, also afforded us the amazing opportunity for the space to be accessible, well lit and experienced day or night, 24/7. Many of the installations like Wayne’s and John’s in Richards photos were designed with this in mind.

We also liked the courtyard and fountain aspect of the City Plaza precinct, on the corner of George and Adelaide, that people would meet and sit and talk and contemplate on the circular fountain wall that was the key feature of the City Plaza and in the backdrop there was the grand Brisbane City Hall ( and inside a city council that was conservative and homophobic) we like this placement, that the diverse tech savvy and “difficult” contemporary art we were making was posited next to this old and conservative public institution, and in this precinct a measure of civil disobedience/ performativity, music, sound art, installation and video art were an important focus of the program.

Another key motivation for us was to professionally document the project and artists John Stafford and Wayne Smith contacted artist Richard Stringer to document their collaborative installations as evidenced here in the post.

BUREAU was designed to be both a gallery and studio model, and the street level nature of the space allowed artists to work in full view of members of the public in a shop front venue. From memory we were all keen for the space to be used as artist studios as they were few spaces available in the inner city after Expo 88. Bureau was also designed to be a short term project, much like A ROOM in 1984 had been a short ( 6 month) project and this was done with a mindfulness that we could produce a short series of projects, exhibitions and events as type of start up, so that the space could in turn be managed by a new group of artists. Artists like myself, Virginia Barratt and Jane Richens were reluctant to commit to a longer period for the Bureau project as we were all permanently relocating interstate in April May 1989. 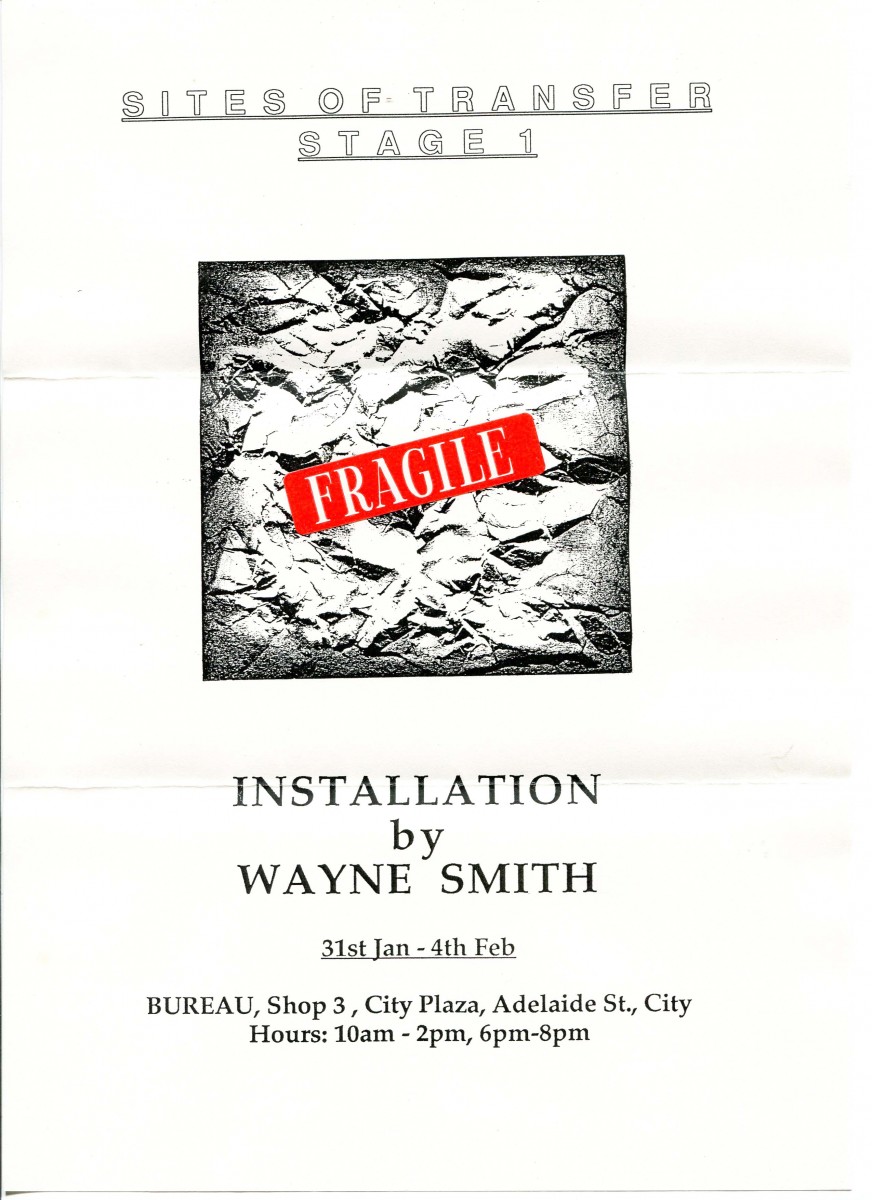 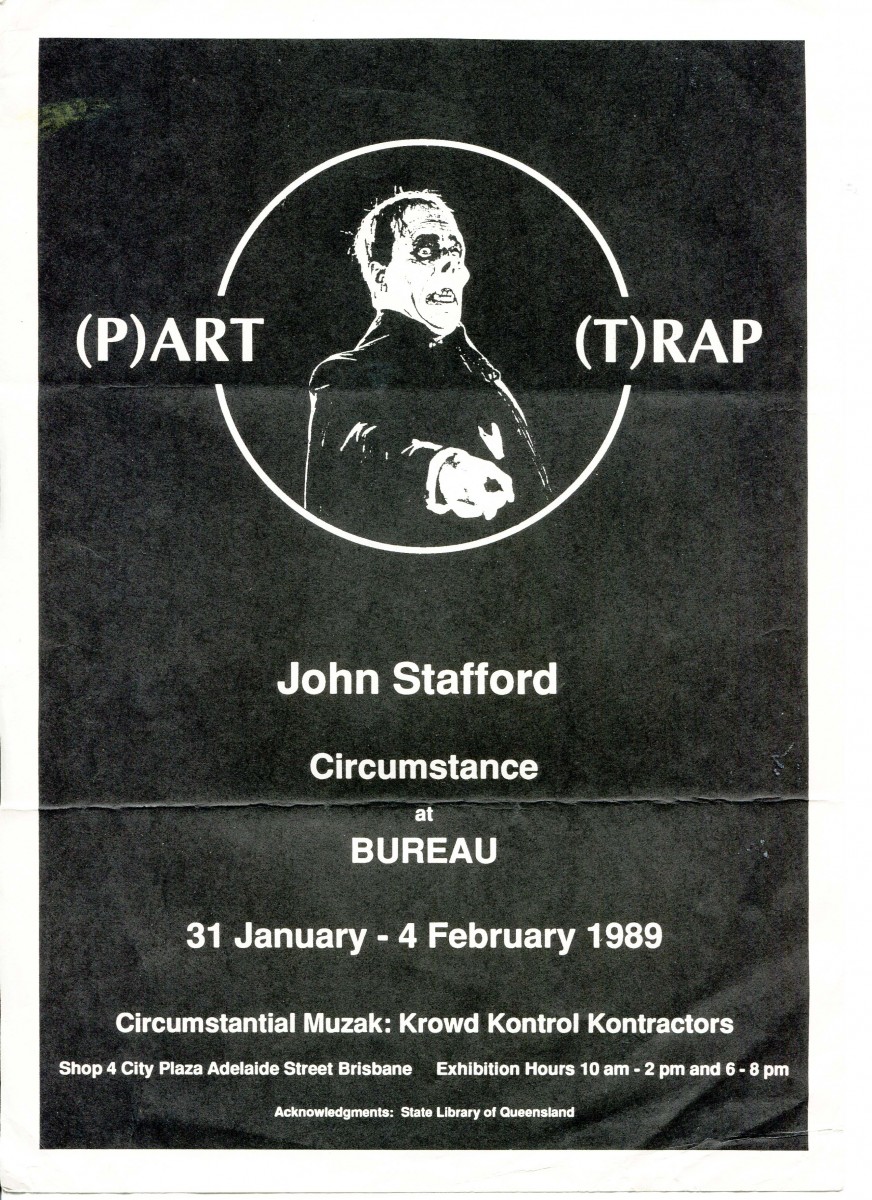 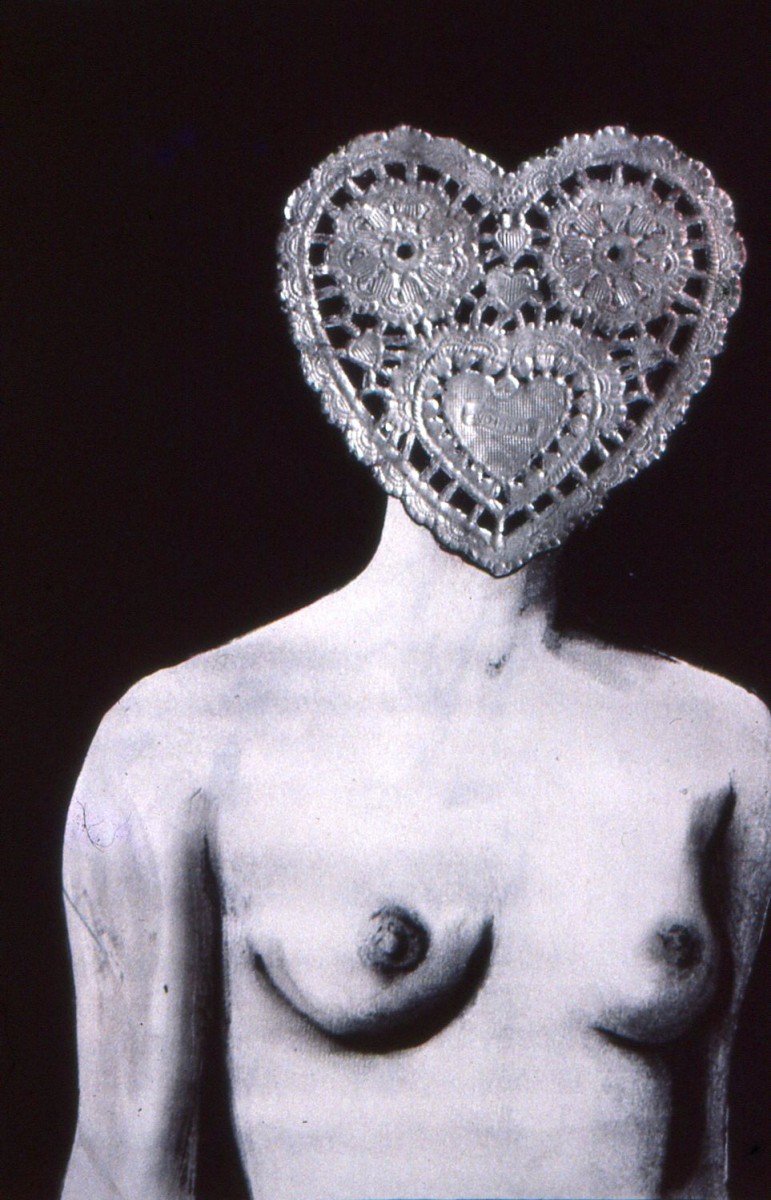 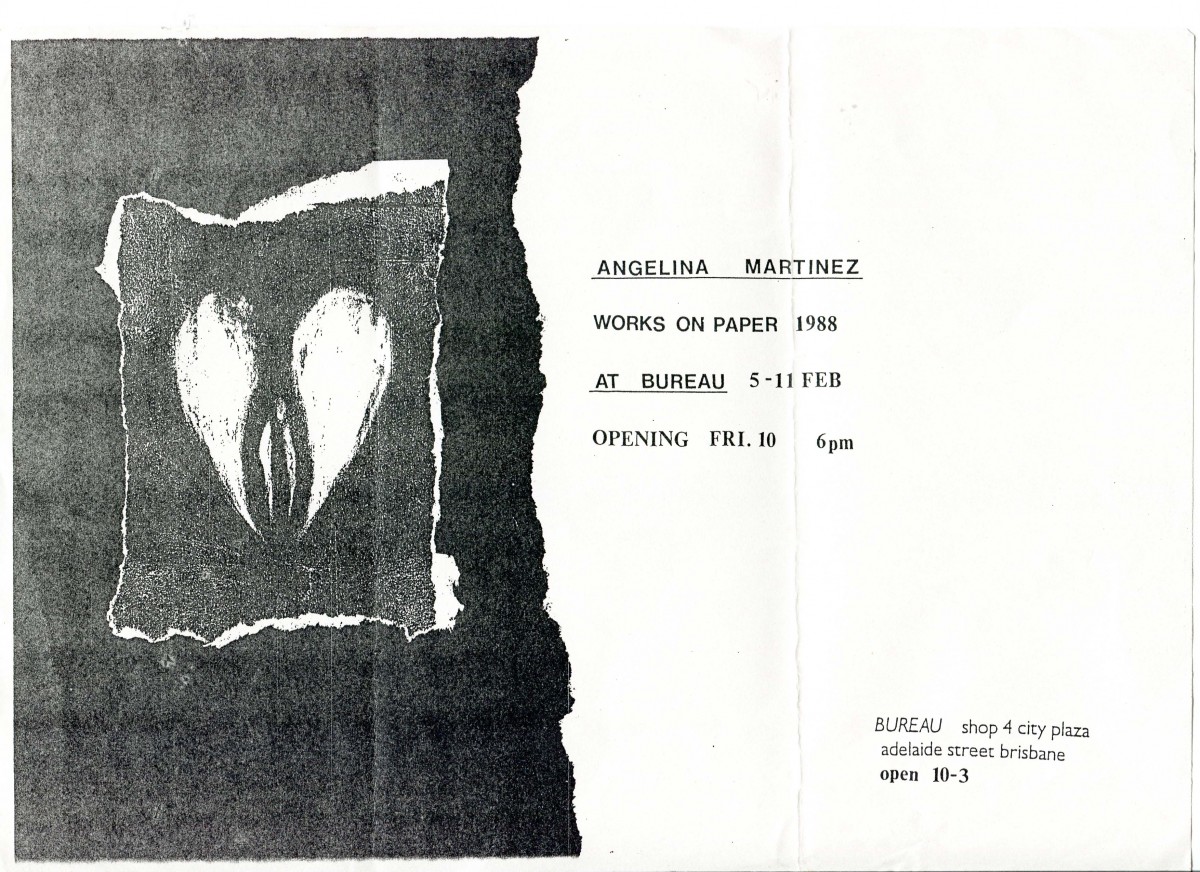 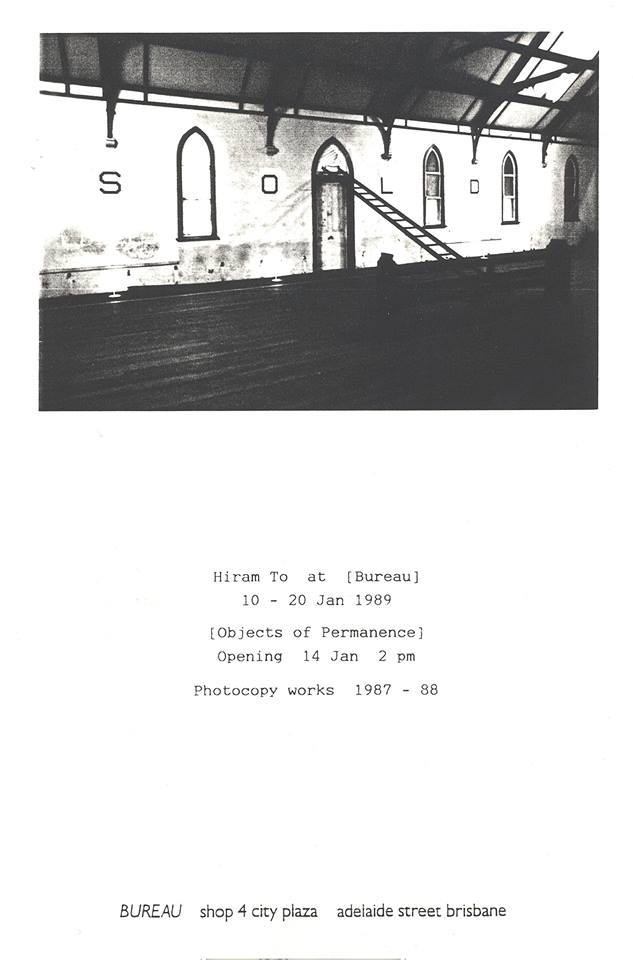 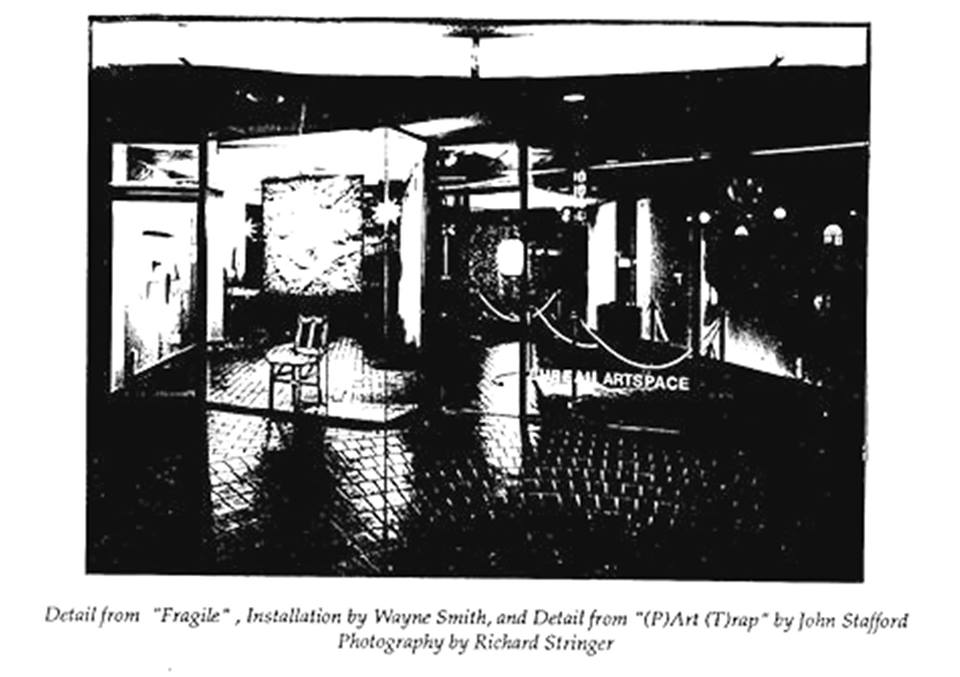 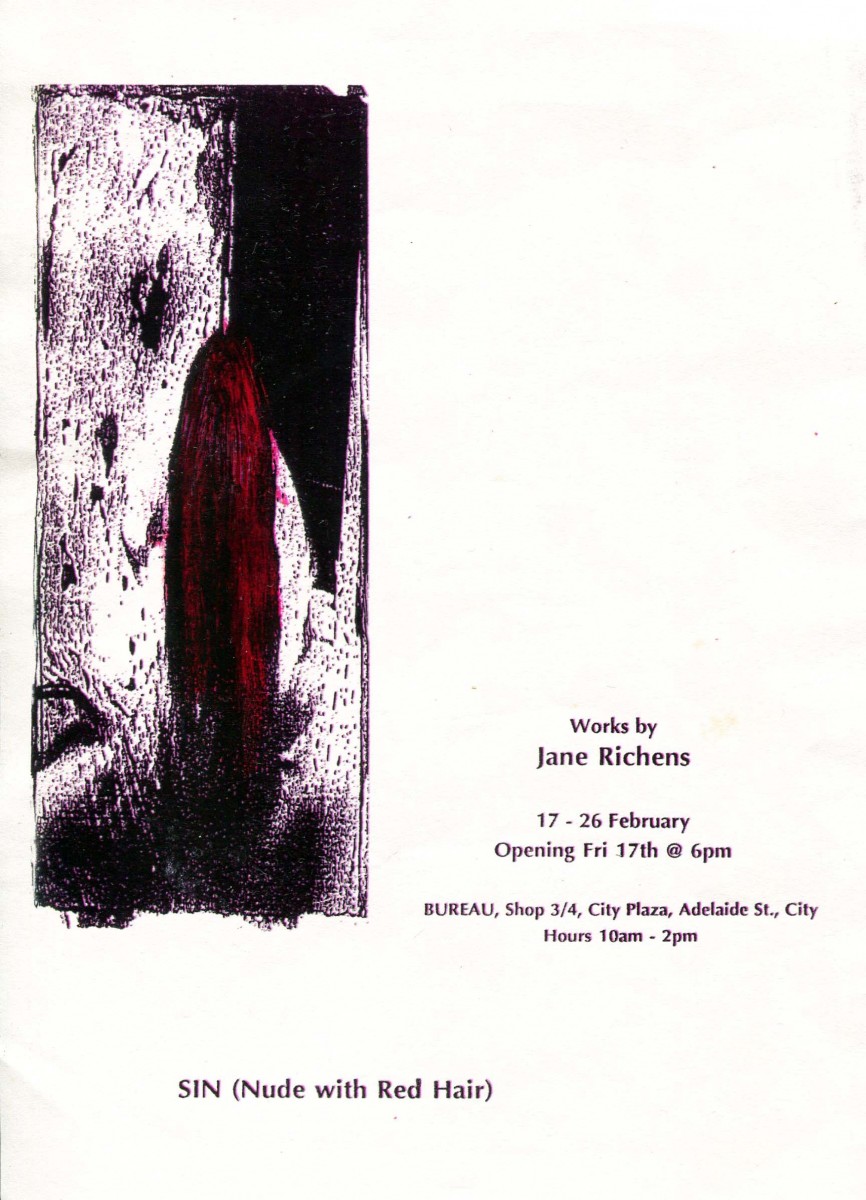 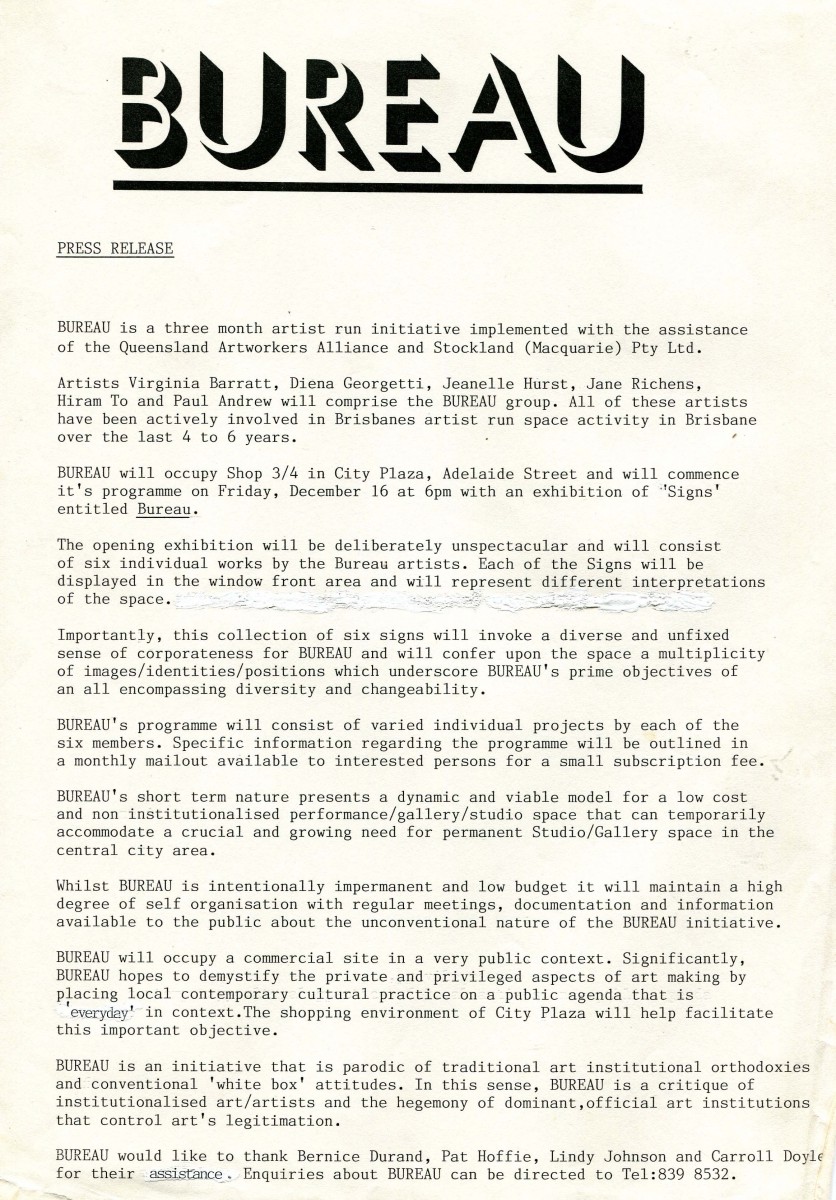 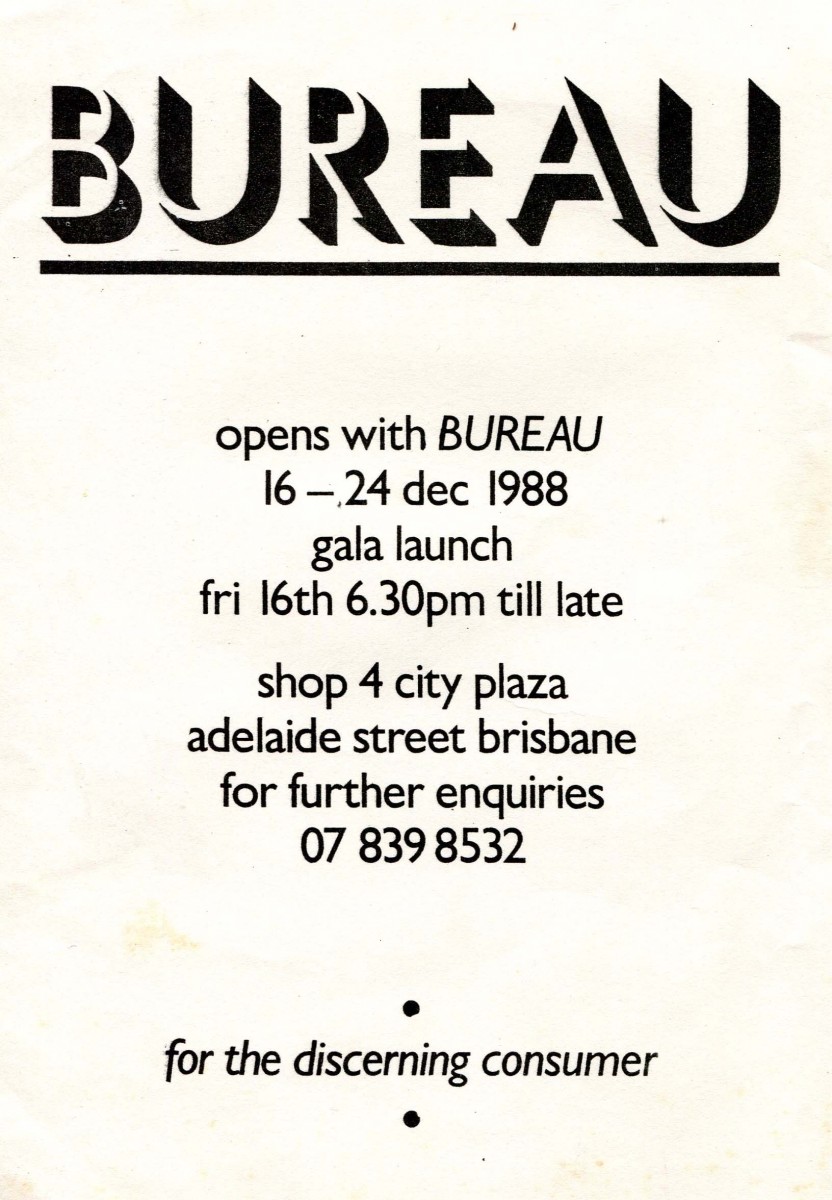 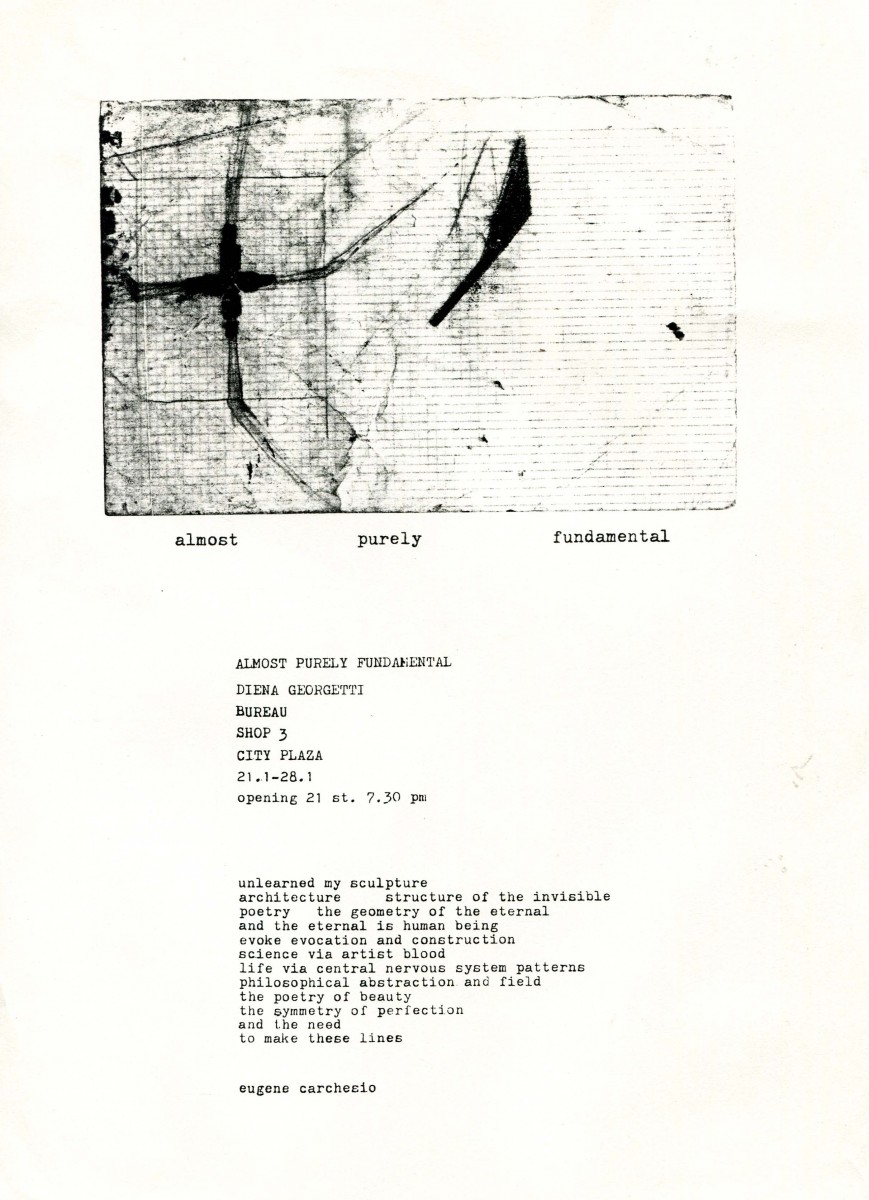 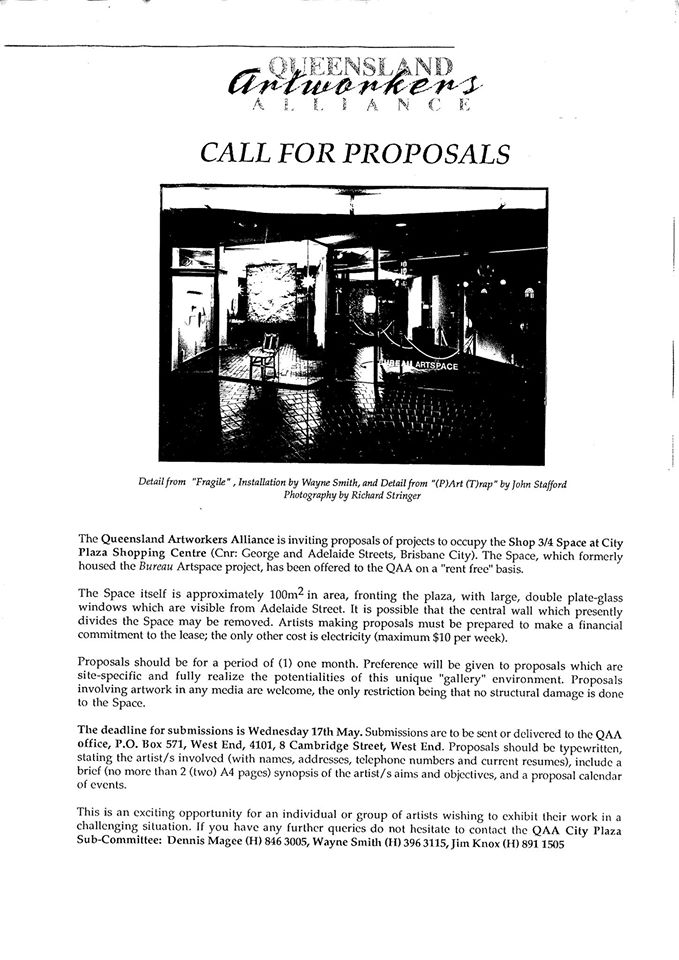 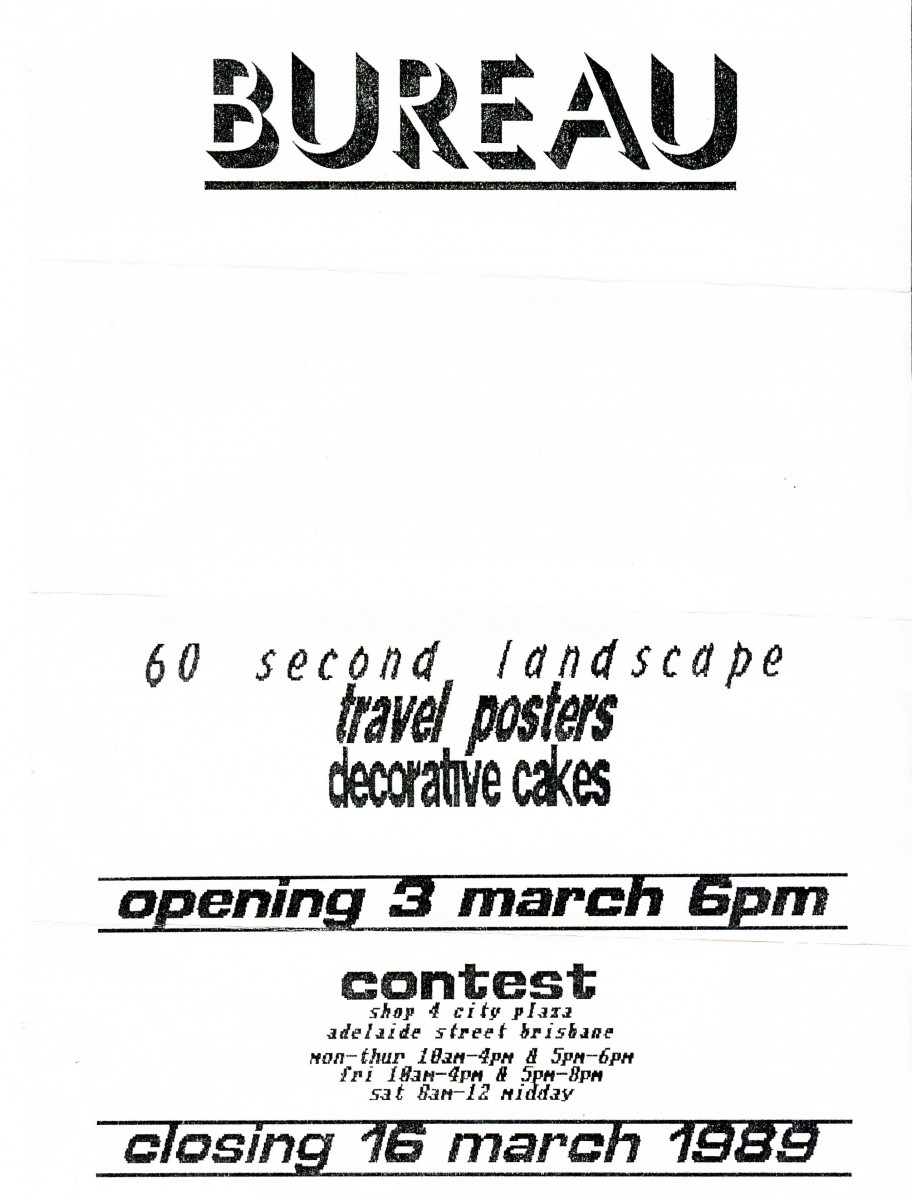 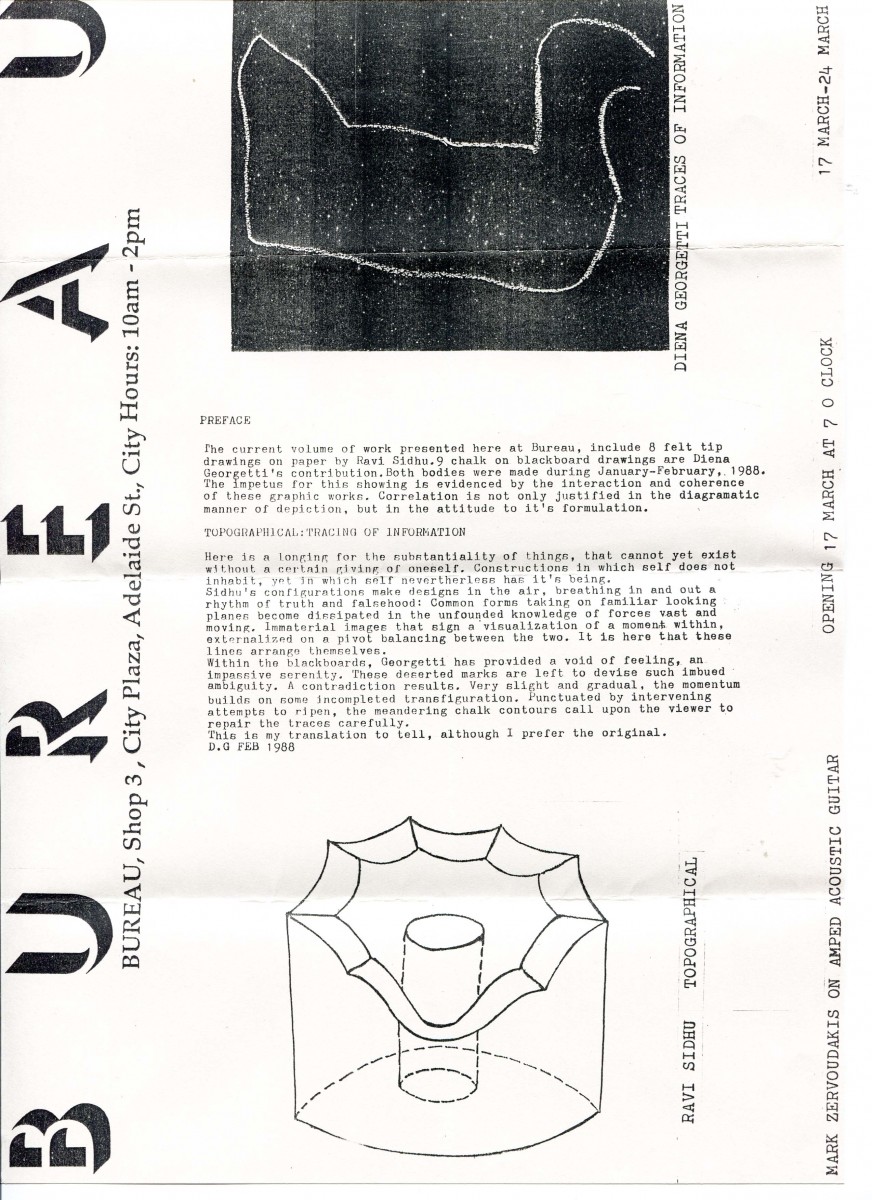 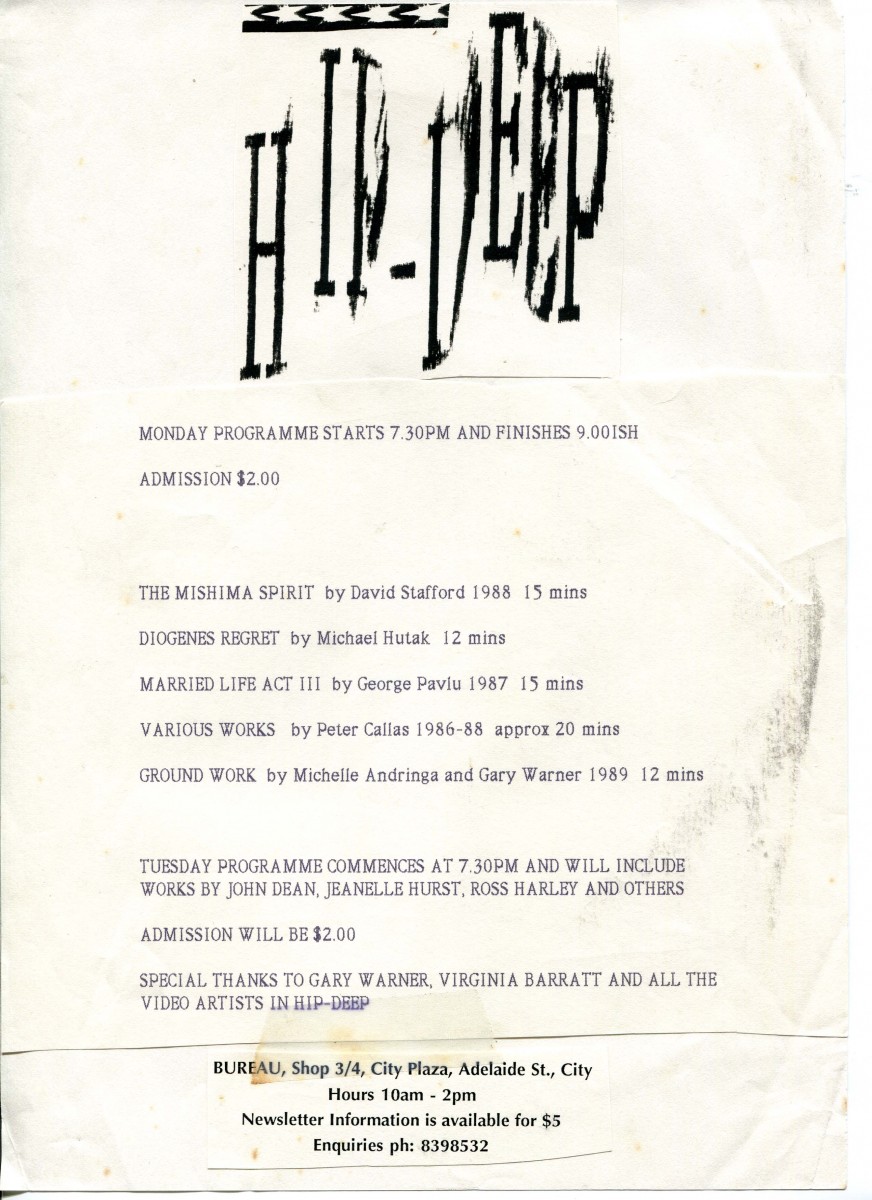 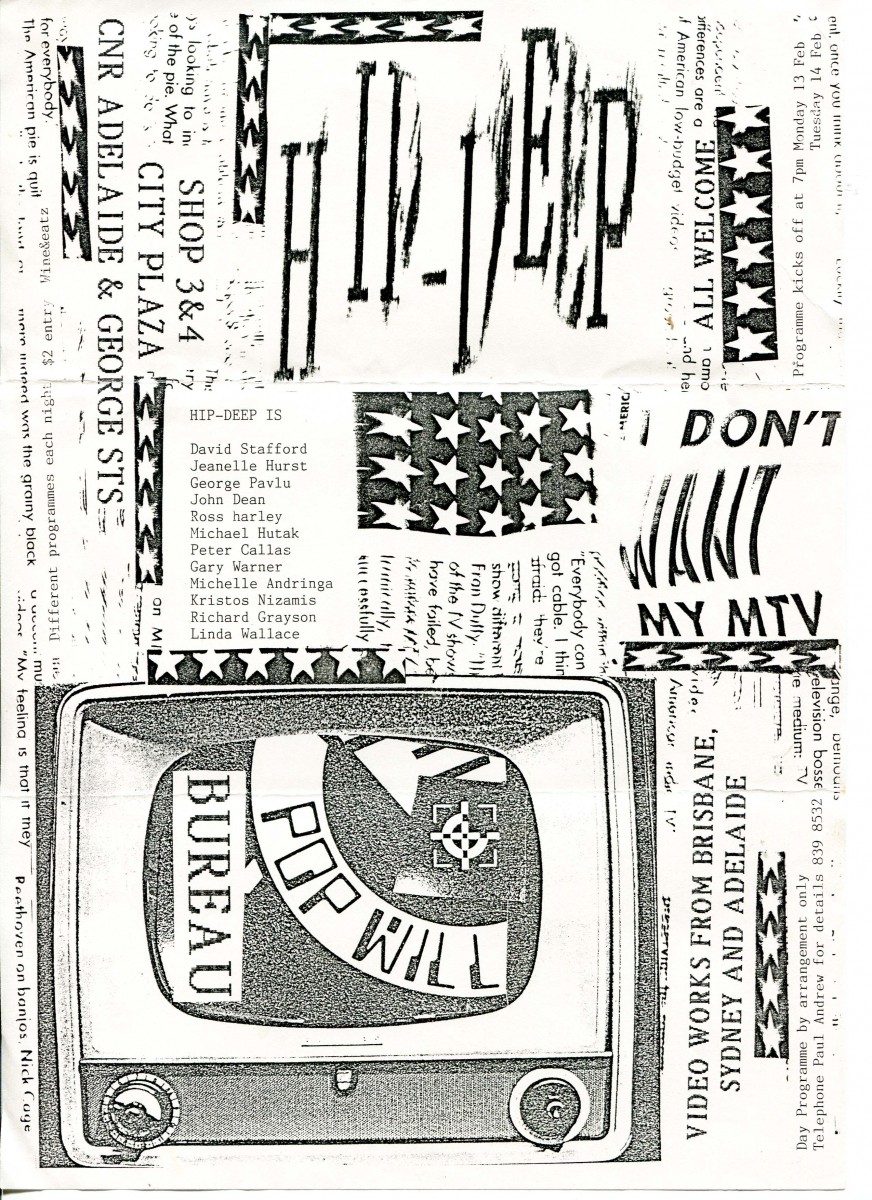 Q: And the ephemera you produced?

We kept the ephemera simple, A4 photocopy invites, one or two page newsletters and related publicity/media releases for the mail outs to our mailing list, interestingly a list that was a blend of all the mailing lists each of us had generated in preceding years at the artist-runs we were involved with. And these big mail outs were attended to by Lindy at the QAA office then located in West End and from memory the QAA; which we had all long been members of, also paid for the postage, we paid for electricity, which was maybe 50 or 60 dollars for the three months.  Artists could elect to design and produce their own posters if they wanted added publicity and promotion. Here below are a few examples of the photocopy ephemera we produced in 1988 and in 1989.