Ensayos is a collective research practice initiated on the archipelago of Tierra del Fuego in 2010. Ensayos’ issue-based research methodologies arise from archipelagic delirium and are characterized by their sensuality and precariousness. Drawing on the existing conservation initiatives in Tierra del Fuego (WCS Parque Karukinka, Caleta Maria, and the Selk’nam Corporation Covadonga Ona), Ensayos insists on experimental practices that entangle artistic and social science methods with the environmental research efforts already underway. Though Ensayos first focused solely on the ecopolitical issues impacting the Fuegian archipelago and its inhabitants –past and present, human and nonhuman– now, other archipelagos have come into view (Northern Norway, Australia, New York, and Sri Lanka). Ensayos (inquiries or rehearsals in English) is a global exercise in emergent forms of eco-cultural ethics.

Tierra del Fuego is located at the southern tip of Patagonia. We honour the Indigenous Selk’nam, Yaghan, Kawéskar and Haush peoples on whose ancestral lands and waters we conduct research and learn. The land is rich in fungi and plant species, including cortinarius magellanicus, cyttaria darwinii, southern beech, ciruelillo, orchid flower dove, and sundew, a small carnivorous plant that eats insects. It is also home to the unique Patagonian wildlife, refuge to the guanaco, the red fox, the Andean condor, and the Magellanic woodpecker. Among this biodiversity, Tierra del Fuego is a territory full of contradictions whose geographical remoteness, and extreme weather conditions have established it as a “land to be conquered”. Despite its macabre colonial history, Tierra del Fuego and the neighbouring Cabo de Hornos region is today home to several Indigenous communities and continues to stand out for its desolation. This “extreme” condition also characterizes the other archipelagos on which Ensayos takes place.

The first Ensayo took place at WCS Karukinka Natural Park on the main island of the Fuegian archipelago, Karokynka, in 2011. During this initial inquiry a group of concerned artists, scientists and locals met to contemplate how the archipelago at the southernmost tip of the Americas could inspire emergent forms of bio-cultural ethics. From this opening Ensayo formed three distinct, long-term, transdisciplinary inquiries. These are Ensayo #2, focusing on extinction; Ensayo #3 on human geography; Ensayo #4, on coastal health; and later Ensayo #5 on rights and documentation. Each Ensayo is the responsibility of distinct but entangled groups of researchers who share their concerns by exchanging methodologies with each other in a playful practice of expanding the possible.

Ensayos began as a largely self-funded program. This means that the artists, curators, scientists and locals involved in each Ensayo share the responsibility for raising the necessary funds to carry out their inquiries. Some of the funding bodies that have supported Ensayos are the Office of Contemporary Art Norway, Tigertail Artist Access Grant, Kadist Art Foundation Paris, Galería Patricia Ready, the Norwegian and Swedish Embassies, the Chilean Cultural Council, the Museo de Artes Visuales (MAVI), Columbia University, Dartmouth College, Universidad de Magallanes, and Monash University in Australia.

Over the years Ensayos has defined itself as an interdisciplinary residency, a transdisciplinary research program, an ecofeminist collective, a public health service, and a curatorial exercise. During this progression Ensayos has always been focused on process more than on outcome, although along the way it has resulted in exhibitions, films, performances, scientific experiments, a web series, and even perfumes, combining knowledge and work methods in a way that transcends disciplines. In all of its forms, Ensayos insists on the regenerative potential of open-ended, undisciplined creative research that carefully assembles independent researchers with indigenous communities, local organizations, institutions, governing bodies, and more-than-human entities. 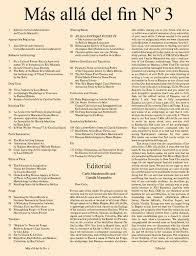