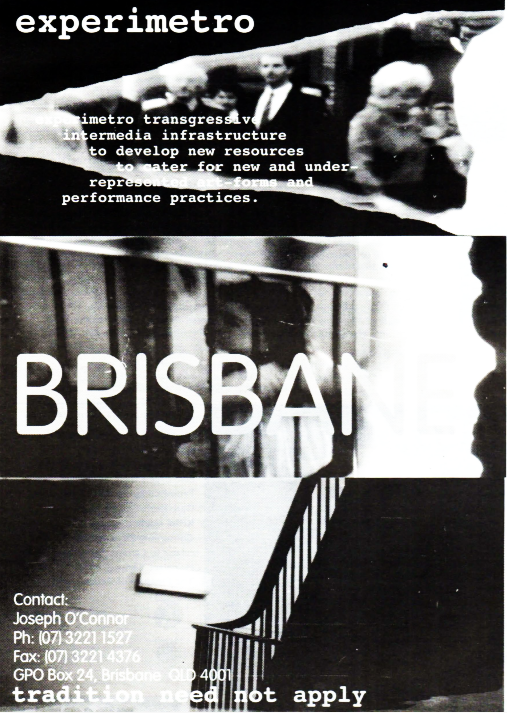 Metro Arts was originally located in a heritage-listed building, originally a light industrial warehouse and then an arts, artist studios, cinema and theatre complex, at 109-117 Edward Street, Brisbane City, Queensland

Joseph O’Connor trained at QCA with a grounding in intermedia technological practices including video and sound installation and was the founder of Boulder Lodge Concepts an artist-run initiative in Fortitude Valley.  Building out from this expertise in his role as director of Metro Arts where many visual arts, theatre and creative practices intersected and cross pollinated in the inner city locale, he described his interest in contemporary ideas being used in performative ways as:

Eye-Phonics is a twelve-month investigation

in Brisbane of multi-media, multi-art

practices, with particular reference to sound

and its relation to performance. The

Bernard Heidsieck with more to come from

performer and writer Kathy Acker and

multi-media artist Ellen Zweig, both from

On a recent visit to Brisbane, Keith

discussed the motivation for, the progress

of, and the future of the Experimetro

O’Connor. Maryanne Lynch is the co-

project with Joseph. Academic, writer and

collaborated on planning and negotiations.

The following interview was performed to

the accompaniment of jackhammers in the

street and a square-dance caller next door,

the latter a reminder that Metro Arts began

as a community arts centre. It still sustains

those activities but also houses a cinema, a

Jdarra (at that time performing Murri

Love) and other organisations – it has

JO Eye-Phonics is a response to a lack of

innovation in performance in Brisbane, an

initiative of the Experimetro program

jointly funded by the Drama Committee of

the Performing Arts Board and the

ML It’s about creating a space for

performance which is being more broadly

JO The catalyst program we’ll have for

that’s run on the same kind of structure as

apart and looking at its components and

for defined periods of time, really honing in

on each one of those and developing them

and providing as many opportunities for

artists as we can.

ML Having a diversity of artists means

that the way in which the question of, say,

sound in performance is approached is a

diverse one rather than getting together a

group of people who all come from the

already proving interesting to participate in

the way different processes and starting

points jump off one another or jar with one

KG What were the criteria for selecting

ML They all needed to have some

experience in an art form. It didn’t need to

be sound or performance but an interest in

and a rationale for being involved in the

JO We have film-makers, sound people,

theatre people, writers. The program is

aiming to broaden the performance culture

as well as improve the practice of individual

JO There is no school or group of sound

artists in Brisbane. Sound culture is not

something that Brisbane is known for. Part

of the aim of Eye-Phonics is to provide the

fertile soil for that to start to grow. What

the twenty one artists are getting out of it is

remarkable, but if this project ends up with

only five people that continue to work

ML I don’t think they even necessarily

need to end up in sound.

KG So a visual artist might use sound in

an installation at a later date in a more

ML Or just approach what they’ve been

doing differently even if they don’t use

sound at all. They’ve been informed about

other processes and ideas.

KG Will this help to create a performance

JO There already is a performance

interesting one. You’ve got to be here for a

while before you can start to access it. And

a lot of people couldn’t give a shit whether

their work is given the credibility that we

oblivious to the system in a way. A lot of

this is to do with performance in Brisbane

being part of the club scene.

KG Do performers speak and work with

one another? In Sydney, for example,

there’s a lot of cross-fertilisation.

ML My impression is of fragmentation.

JO It is fragmented but there’s also a

generosity amongst those practitioners.

KG Where is this work happening?

JO You see it in clubs like Van Gogh’s

Earlobe at West End, The Zoo in Lortitude

Valley, some of the gay clubs up on Spring

Hill and the Roxy, primarily a live music

KG So is it a cabaret format, one-offs or

do people do seasons, or is it in the context

JO All of those. What is missing is an

Brian Lucas are setting up The Crab Room

which could make a big difference. Then

work. I see popular music as the catalyst

for a lot of these things. The Livid Lestival

has been a major showcase each year. Last

JO We used to have Brutal and Space

Plenitude but they no longer exist. These

galleries support the sort of performance

that IMA (Institute of Modern Art)

supports, mostly solo works with an

intellectual or theoretical base, whereas

support the Brink sort of performance – the

puppetry, the mime, the ensembles –

ML Community companies. I think the

performance scene in Brisbane is

fragmented. I do find it amazing that in a

city this size one group will not even know

KG In Sydney the Performance Space

provides a focus. Sooner or later most

people seem to perform there so you see

one another’s work. Is Eye-Phonics a way

to draw some of these people together?

ML Yes. I think we’ve got quite a

usually work and who they normally work

lead singer of a techno-band, performer

ML Diverse in ages too – the bulk in their

JO It’s an open-ended project. The only

fixed things are the CD at the end, a

compilation of works created as part of the

project, and a magazine. There is a

structure but it’s open ended so we can pick

up on interesting things that happen along

the way. Along with the international

guests we are having visits by interstate

artists to give people here a sense of what’s

happening elsewhere. There are also artists

in the group who are working on projects

of their own. We have monthly meetings

where people get together and decide

what’s needed. Last month we had a

technical workshop in the morning and in

the afternoon presentations of people’s

KG What sort of resources do they have

JO That’s the question they’ve been

asking. After looking at what the artists are

ML And our options, given our ‘vast’

JO Most of the money for this project

from the Hybrid Arts Committee has gone

on artists’ fees and airfares.

ML It’s now apparent that it will be more

useful to have fewer artists coming and

the responsiveness to this group.

JO So we’re buying some equipment that

will be compatible with other stuff we can

hire on a long term basis and there’s a

room on the second floor which we’re

converting into a recording studio.

ML The artists will have access to a DAT

recorder, a sampler, a reel to reel, some use

of computer. At other times, when the need

arises we’ll bring stuff in. A couple of

their own equipment up to a point.

JO It’s very important that people in this

program place demands on the program

and Experimetro and the Board of Metro

Arts. It’s got to enable them to realise

whatever ideas they have in mind.

ML We’ve also got space on the internet.

We have a web page for each artist.

KG What about broadcasting some of the

we might strike a deal with the ABC. We’ll

distribute the CD through our membership

and data base but it will also be distributed

nationally by Valve Records which is a

ML And because it will also have the

international and interstate artists – that’s a

bit of a hook.

JO It might be hard to sell aCD with

local soundwork by Brisbane artists but

piece – that’s what we’ve asked them all to

KG Are there are any signs that Eye-

phonics is already having an impact?

ML Doug Leonard is using sound in an

interesting way in his piece lONALYMPUS,

a performance about Eve Langley.

night, I was dead proud. I loved it, work

that I’ve never seen Keiran do before. It

was called This Is Not A Revolution in

Choice and it dealt with the introduction of

pay television. It was the second of three

performances I saw on the Wharf down by

the river. He just got up and talked with

funny in his very dry way.

KG Does he usually use a talk format?

this tape recorder was before we started the

interview. It’s the work that keeps you

going, especially when you can see results

from what we’re doing. I’d like to think the

organisation could become a production

of time to specific but diverse projects.

ML In Brisbane people complain about

lack of venues. It’s important that a

Phonics project are attached to a place, a

JO I find at times being in Metro Arts an

walk up the hallway and the door will open

and you’ll just get a glimpse of something

to do something with those people. Then

the Indian classical dancers move in.

JO I wonder who thought up that term?

JO I try consciously not to use it.