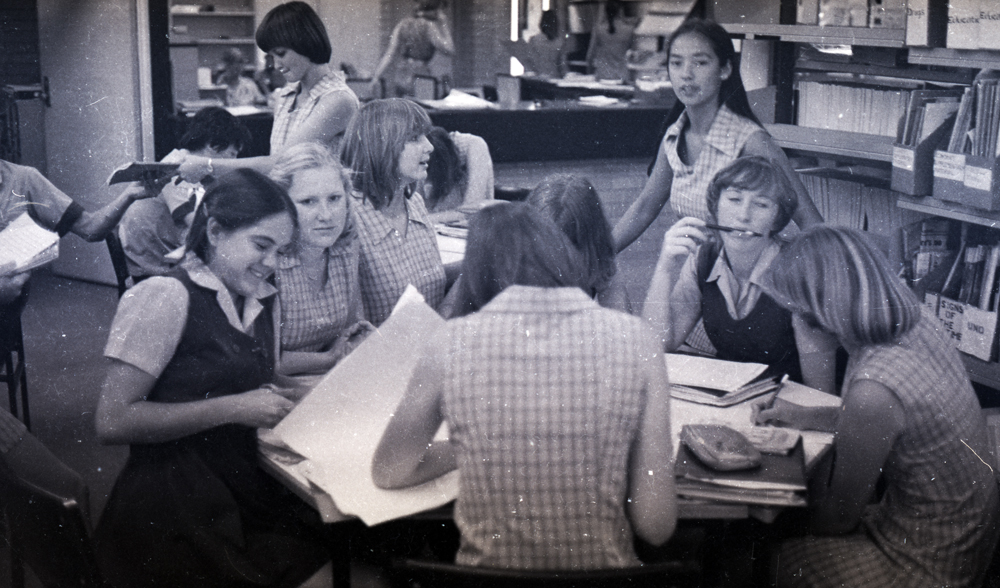 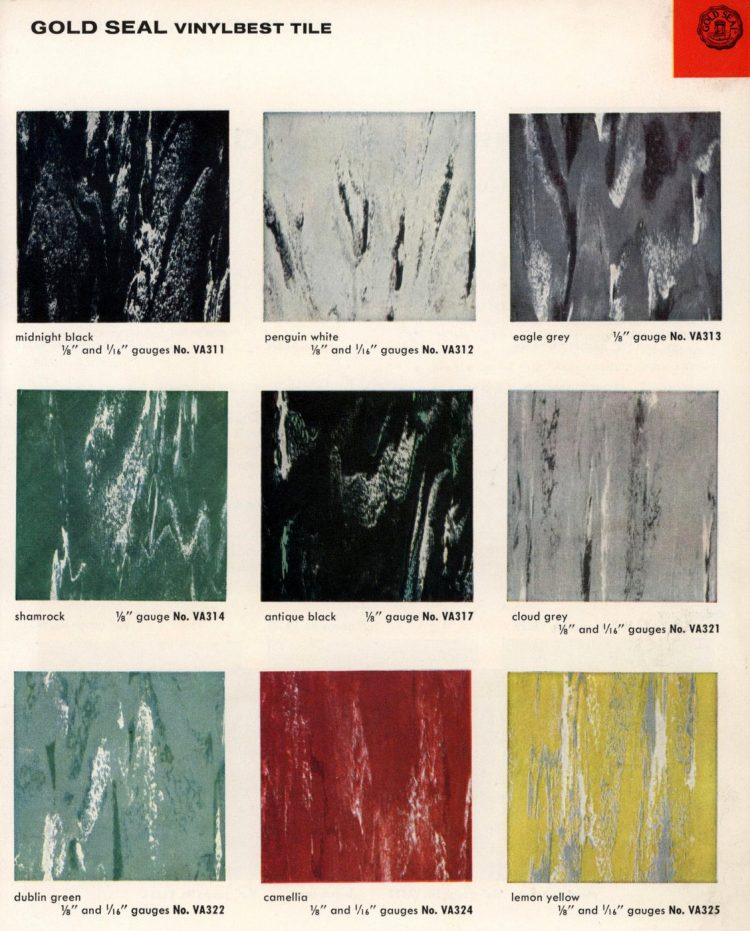 Working alongside school magazine committee members throughout 1979 and 1980 involved developing and writing stories and personal reflections about everyday aspects of being a student at Mitchelton State High School during the late 1970s. It was a fecund time for us at the cusp of a new decade ahead which promised access to amiga computers, new video arcade and computer games like Space Invaders only better and more high tech, access to terrific nursing, university, cadet journalist and art college opportunities.

These varied school magazine written accounts were produced after lots of discussion at committee meetings and included diverse news items; including a visiting basketball team from the US, drama classes and the production of the annual school musical ‘The King and I” , the lunch time ‘pirate’ radio program held outside of the library which played everything from Lene Lovich, X Ray Spex, Kraftwerk and latest Brisbane punk music like The Leftovers, the geography excursions looking into canal development and it’s environmental impact in Noosa, a bush regeneration program in the grounds and the endless taking of 35 mm B & W photographs for the 1980 school magazine itself to process collaboratively in the well stocked B & W dark room in the art block.

All this was much ado for the then proposed 1980 School Magazine titled Googoorewon. This was an aboriginal word used by the school for it’s meaning ‘place of trees’.and was selected by the magazine founders to acknowledge ancient aboriginal heritage in the region and arguably was part of a swelling social movement at the time with increased interest in aboriginal culture since the 1967 Referendum which recognised Australia’s first nation peoples.

In 2009 almost three decades later while undertaking my masters in creative writing at RMIT in Melbourne I was becoming more interested in life writing than arts journalism and was keen to write a short story about working on the 1980 school magazine as a shy queer student interested in storytelling, environmental activism, contemporary art and aboriginal activist poetry and in particular works by poet and educator Oodgeroo Noonuccal and with the aim that my writing, queer inflected with the voice of reflection as a middle aged creative practitioner.

As a white kid from Arana Hills I was interested in aboriginal place names, their meanings, the diversity of art, cultural and heritage since my mum purchased a small aboriginal words dictionary from a Brisbane bookstore in 1968 and inspired by this shift in thinking named a local pathway ‘Jenong Way’ (Jenong meeting ‘foot’) , and the amazing dictionary, now long lost was much like this one pictured here. 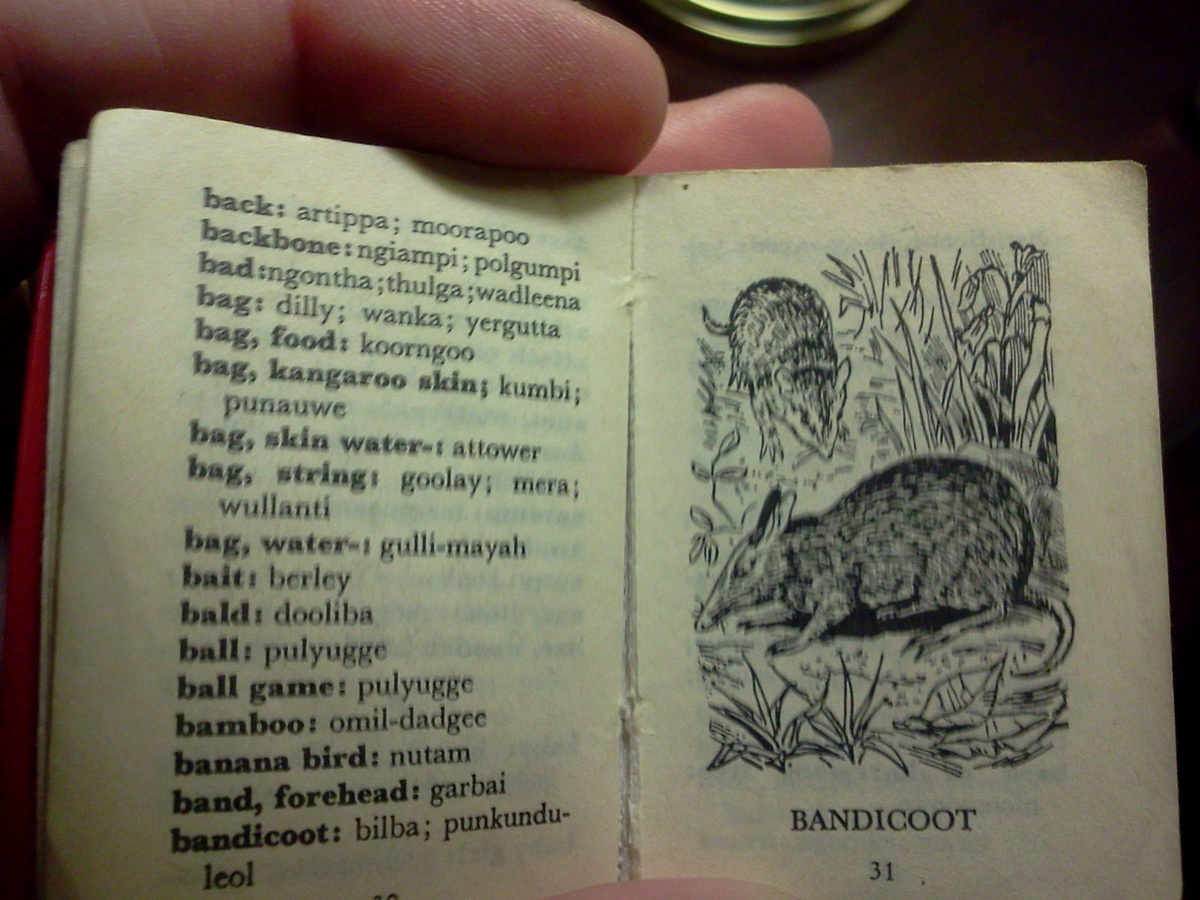 Perhaps this new interest in life writing was due in part to sitting in dull RMIT classrooms floored with marbled grey flecked vinyl tiles just like the ones familiar throughout my schooling and sitting once again in a university context learning new and complex things like writing memoir in classroom settings.  Somehow these marbled grey tiles allowed vivid memories to cascade freely and activated a queered voice and the opportunity to remember again in a way that was both energising and vibrant, and perhaps most of all, a way that felt transformative.

During the 2009 writing journey I remembered that for some unknown reason towards the end of the senior school year in 1980 the magazine was mysteriously scrapped by the then powers that be. We were told there was no budget for a magazine and that all the fundraising produced  from two years of walkathons, lamington drives, toffee stalls, fetes and swimming carnivals had been spent towards the acquisition of the school’s very first computer.

And I remembered how unruly it felt to me as a 16 year old artist to be walking around the school’s steaming hot bitumen quadrangle, the library courtyard and the brutalist corrugated assembly hall taking informal, candid and at times cheeky photographs of student life. To my mind, always a punk in ethos, these documentary  images consciously contested those dreary formal and official photographs that characterised nearly all previous issues of the school magazine since it began in the late sixties or perhaps in 1970 as the NLA entry above suggests.

And I remembered that while we were all feeling pretty devastated that the 1980 Googoorewon magazine was shelved after two years of passion, journalistic skills development, black and white processing  and labour. Much to our chagrin the school’s computer was only accessible to physics, chemisty, Maths 1 and Maths 2 students, and the humanities and social maths students were not allowed to participate in any of the compute classes. A saving grace that year was the consoling news from the powers that be just as we were leaving school in the summer that the box of archives of all the magazine committee’s written material, illustrations, striking hand made graphics, cartoons and the collection of B&W photographs for that “magazine that never was” were to be held and preserved in the extensive school library collection for safe keeping. We were advised we were allowed to access these archives if we contacted the school principal.

In 2009 as I was writing about personal experiences; those government issue art reproductions on the state school walls by Namatjira, McCubbin and the Heidleberg School, Grace Cossington Smith that drew my attention away from the seas of grey marbled floors, furtively recollecting the endless fiction and non-fiction books I cherished then as puberty erupted and the vagaries of school life unfolded that were feeling both mundane and ennobling.

As a part of my research I was keen to finally access those magazine archives of 1980 and in particular the photos I had taken (albeit a little later than planned) and perhaps something of past library records which might reveal the queered texts and voices, the plethora of environmental and related activist books of adolescence and so I wrote to the Mitchelton State High School in February 2009 and quickly received this gracious reply;

I have been asked to reply to your email requesting any information on a 1980 Mitchelton State High School magazine.  Unfortunately, we do not have any copies and there is no record of a file on the prepared articles.

The Library suffered a fire in 2003 and our only back-up tapes reveal no records of the 1980 magazine or the two books in your enquiry.

However, the Schools Catalogue Information Service (SCIS) shows a publication of ‘Stradbroke Dreamtime’ in 1972 by Angus & Robertson, Sydney.  It also shows a publication of ‘Watcher of the Cast Iron Balcony in 1967 by Faber (Publishers), London.  I believe these editions would have been the ones most likely to have been purchased by the school.  Information on ‘Stradbroke Dreamtime’ is available in GoogleBooks on the link “About This Book”.

I’m sorry I couldn’t have been of more help to you.  Good luck with your Masters!

It felt terrific to hear back from the library so promptly, but sad news it was. I was sad to hear about the fire.  In some ways I had assumed the archives would be there and easily accessed and retrievable despite the passing of years.  So I was absolutely thrilled to bits to discover almost six years later in 2015 as I opened a mysterious dusty folded sheet of cartridge paper held in the That Contemporary Art Space archives ( an artist-run space I co-ordinated in Brisbane city from 1984-1988)  that I was actively sifting through that year for a digital participatory archiving project. This fold of paper had in fact protected and housed many of the missing negatives I had taken for Googoorewon way back in the late 1970s.

It was a lost archive found. A eureka moment. I was feeling jubilant and quite eager to see what was in fact documented in these many photographs so I organised for the 35 mm negs to be professionally digitised by my artist colleague Shehab Uddin at Live Image located at Griffith University. Today these small archives of the remaining magazine images are presented here now in 2020 for your enjoyment, for ease of access and in part as a small and fond memory acknowledgement to the 1980 Googoorewon school magazine.

Hard to believe that four decades have passed and it is with love and affection to all the wonderful teachers and the misfits punks queers and germ free adolescents [thanks X Ray Spex and all the joy you shared of being  ‘deliberate underacheivers’ ] who all worked so tirelessly together so hard for so long for a pithy pimples warts and all for a candid fly on the wall school magazine edition that almost never happened…. 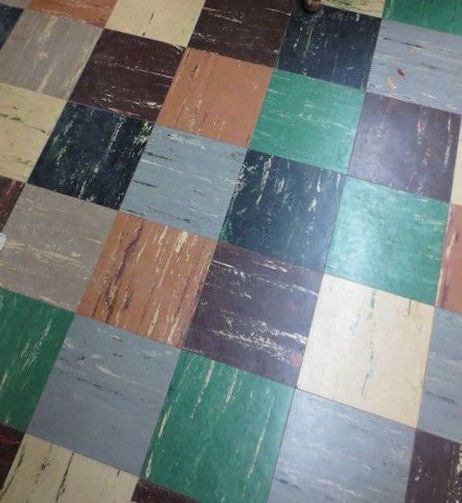