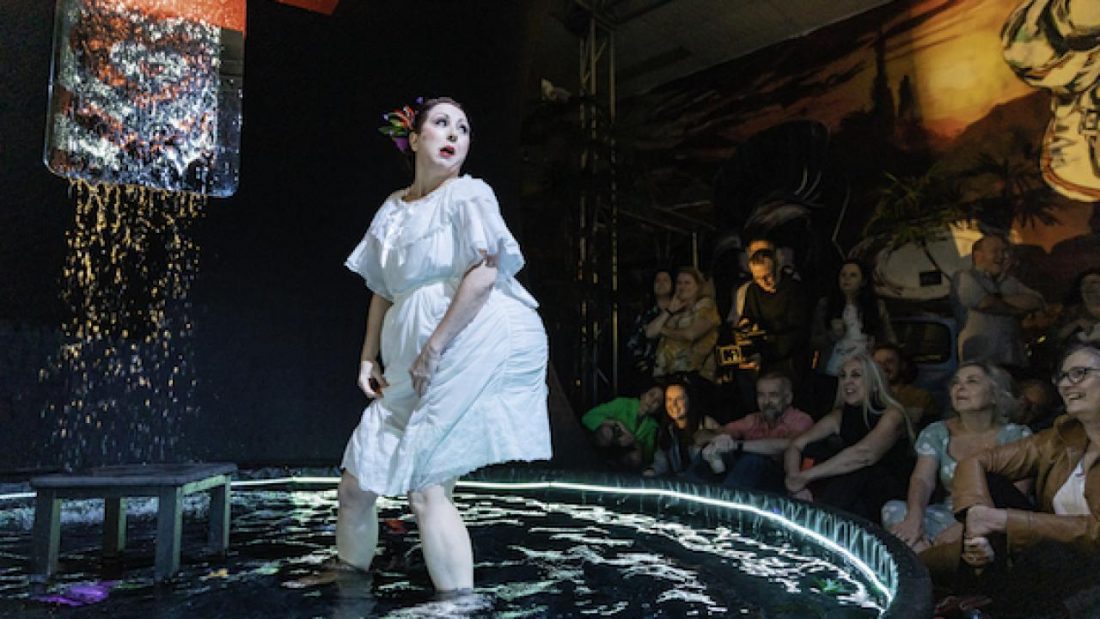 Author Wendy Wick Reaves writes “humour is a slippery subject. Elemental, universal and yet extraordinarily difficult to analyse. It is a topic that art historians tend to avoid” . However, humour is often an essential and ongoing aspect for artists who continue to produce works as a mode of expression, as cultural products, as forms of knowledge about serious subjects worthy of investigation despite the use(s) of levity.

Artist Jay Younger is no stranger to employing a dark politically inflected humour in her long career of artistic practice, her works are about difficult and complex matters. In Meat Mirror, a current performance activated collaboration with performance artist Lisa O’Neill [along with many others] this month at The Walls Art Space in Miami on the Gold Coast the pithy subject under scrutiny is what is commonly described as the Brazilian Butt Lift, also known as, the BBL.

For many social media aficionados this form of mainstream and potentially life-threatening cosmetic surgery has also spearheaded what is now commonly known as ‘the BBL effect’, a  social media-based humourfest largely instigated by New York City-based Tik Tok humourist and influencer Antoni Bumba. ‘The BBL’ effect can be characterised as a series of fictionalised caricature memes of recipients of the procedure; people who have undertaken deeply invasive sutures to the body for the transferal of their body fat deposits from one part of the body to another, living their lives in all manner of everyday comedic settings. Bumba’s comic characters are presented as a posse of bad bitches, all high and mighty, much like pop celebrities themselves who champion the procedure itself (and the many celebs who don’t go public with the pitfalls of the BBL) , these characters are bedazzled with pretty precision makeup, neatly coiffured hair, they are chic, have endless cash or credit and a fabulous dress sense . However, Younger’s ‘BBL effect’  is not a Tik Tok ploy or Tik Tok plot. Meat Mirror adopts a more affective and emotionally-sensitive and social media nuanced intersectional approach. Effectively, without giving too much away, by showing and telling a short story of a fictionalised and introspective intelligent female character, seduced by the persistence of social media memes about the ease of attainability of ‘beauty secrets’ . Secrets that are much needed [or so she thinks] as elixirs for altering her body, for improving her self image, her life. Troubling the persistent and potential gaslighting impact of social media is really what’s at the heart of the work.

Social media often tends to eclipse or mask the evidence-based data, and as a narrative work it suggests that social media tends to gloss over the imminent threat of BBL for serious disfigurement, serious complications, serious infection or death.

Meat Mirror is clever, comic and slick. Younger’s fictive character, while smitten with the seductiveness of memes and misinformation generated on social media gazes into her future with aspiration, towards an imaginary site of paradise and perhaps [what we perceive as an audience] as a type of false becoming. Arguably, the overarching metanarrative of this work is is one of  hope, one of self-realisation and self-determination. “Yes, but what happens in the end?”, you ask, not saying, as you need to experience this fabulous work to find out. What I will say is that through the use of digital surrealist tropes, a litany of comedic language and gestures of the body itself, Younger’s directorial and critical savvy is re-interpreted through O’Neill’s extraordinary live and embodied performativity, the work addresses and challenges the gaslighting effect produced explicitly via social media. The narrative also suggests that the subject of non-essential cosmetic surgery, is a subject experienced by many people regardless of gender.

One thing I especially loved about experiencing Meat Mirror in Brisbane [at Mappins Nursery in it’s earliest iteration in May 2021] is that this new work portends the novel, and unruly potential of performance art and social media today, as an overlapping and intersectional approach. Younger has produced a comprehensive Insta “news feed’ of facts, facts, facts which expressly interconnects with the series of performance events being staged now. These news feeds include news items, resources, quotes and testimonies drawn from reliable scientific and health expert sources as well as from peoples own personal experiences in the form of memes, for example “ The BBL is the most dangerous cosmetic surgery with a mortality rate of 1 in 3000. Source: “2018 Cosmetic (Aesthetic) Surgery National Data Bank Statistics”, The American Society for Aesthetic Plastic Surgery, https://www.surgery.org/sites/default/files/ASAPS-Stats2018_0.pdf, p10.

Considered together, these two complementary aspects, performative events and critical social media news feeds are elements entwined, they help provide a vital evidence-based counter-narrative performance experience, and a hearty good belly laugh too.  A must see on the Goldie at an important local artist-run this June 20 2021, followed by a panel discussion.

Free event!
This event will also be live-streamed via Instagram @thewallsgc

This LAST SUNDAYS program forms part of JAY YOUNGER’s and LISA O’NEILL’s exhibition MEAT MIRROR at THE WALLS from 5 – 20 JUNE, 2021.

RE: Covid-19. A Covid Safe Checklist and social distancing guidelines continue to be followed. We will be collecting contact details upon arrival. We have limited capacity at the art space. Please stay home if you are feeling unwell.

MEAT MIRROR at THE WALLS Miami

How Instagram has changed how we see and experience art

How Instagram has changed how we see and experience art