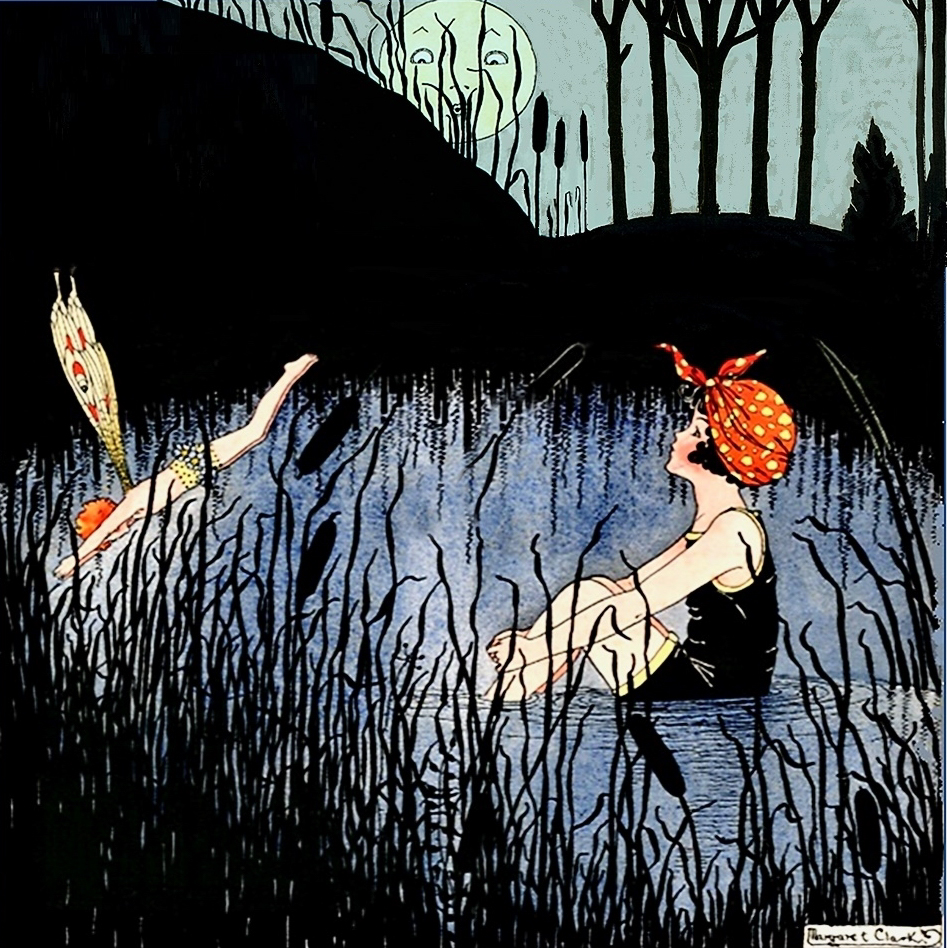 Margaret Clark (1901-2001)  was a celebrated Australian illustrator during the Art Deco era. Many of her magical fantasy illustrations appeared in children’s magazines and advertising between 1918 and 1930.

In 1918 the Sweetacres Confectionery Company commissioned Margaret to create the decorations for their exclusive line of Chocolates. These rare boxes are sought after by collectors. Sweetacres sponsored Margaret to attend the prestigious Julian Ashton School of Art in Sydney.

Margaret was invited to exhibit with the Sydney Society of Women Painters in 1924 with inclusion of 5 illustrations among works by Margaret Preston and May Gibbs. In 1925, a series of six postcards were released in Sydney by S+W Limited which are highly prized by collectors.

I would like to promote the work of Margaret Clark in a greater forum than my website.

I am non-profit and using any sales from my site to keep Margaret Clark’s name in circulation with the world. I have located many of her works through this project. Starting off with two purchased through e-bay and then one at Auction….

Any assistance you can give the project would be greatly appreciated. I am 70 and want to ensure the legacy of wonderful Australian Illustration from the 1920’s era is preserved.

MARGARET CLARK (1901-2001) lived many years out of the limelight. Although some of her work has been displayed on rare occasions, showcasing her work to the world has become my passion. Federation Fairies was formed in 2011. As her great niece I wanted to ensure this inconic illustrator lived on in Australia. Modern technology has been of great benefit in introducing Margaret to this modern generation.

Margaret was born in Plattsburg near Newcastle, New South Wales in 1901. Her parents were refined people who encouraged individuality in each of their six children and made great sacrifice to support their talents.

Margaret’s fantasy illustrations are coloured pen and ink drawings on paper. In time her style developed to a trademark Indian ink background which made her very detailed subjects at times seem to have a 3D effect. Each illustration is a dramatic incident in itself, a static composition which conveys a story of immediate charm and appeal. These are unique, often whimsical and continue to delight those who see them.

In 1918 Margaret was commissioned to produce illustrations for the confectionery manufacturers – Sweetacres. A young 17 year old was being paid to pursue her passion. Margaret spent a brief term at the Julian Ashton School of Art had her illustrations, short stories and poetry published in the children’s magazine Young Australia and in the debut edition of the Steele Rudd Magazine.

At the insistence of a friend, in 1924, five of her illustrations were included among some well known artists such as May Gibbs and Margaret Preston at the Sydney Society or Woman Artists annual exhibition. In 1925 a series of 6 postcards were produced. Her one woman exhibition in 1926 was a gala event and celebrated success with rave reviews appearing in three Sydney newspapers. The 23 illustrations sold at prices between 3.5 and 6 guineas. It seems that every story as a villain, and sadly Margaret was duped of the proceeds by the promoter who later appeared in courts for fraud in relation to unscrupulous dealings with other artists.

In July 1929 and December 1930 two large coloured friezes were included as special supplements to the magazine Australian Childhood.

Sadly, the prolific output of work was not maintained after her marriage in 1929. Margaret was a devoted wife and mother of three talented sons with diverse interests – a linguist, an artist and a lay preacher. Margaret was a remarkable woman living a few months short of 100. She was considered a warm and generous person and admired by all who met her. Children were captivated by her quirky sense of humour and animated stories.

Very little has been published about this very private lady and I am endeavouring to redress this for posterity. Please join me in my discovery of Margaret Clark – an Australian treasure.

All proceeds are used to locate and preserve her legacy. Currently we have located and catalogued 130 of her marvellous illustrations. 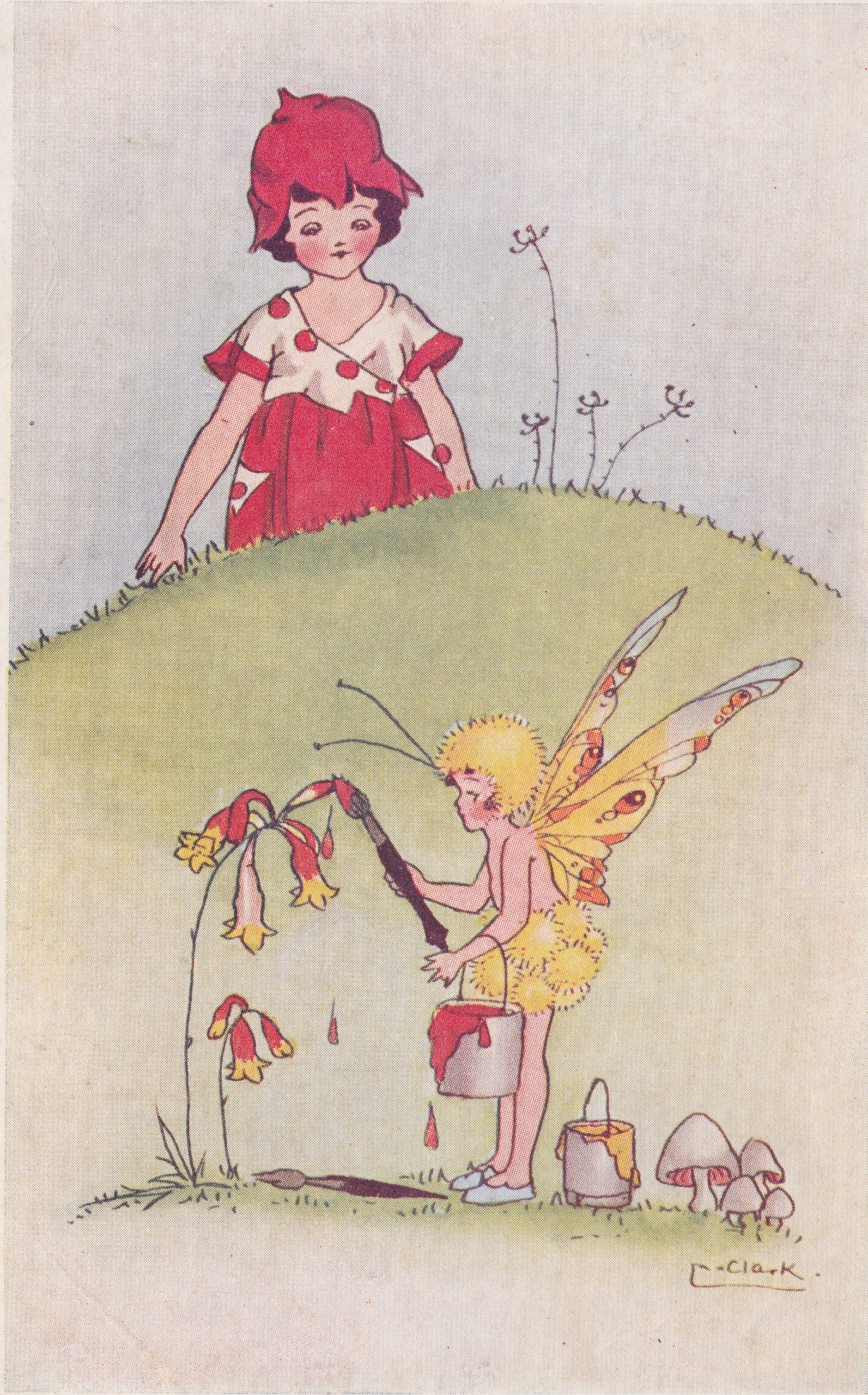 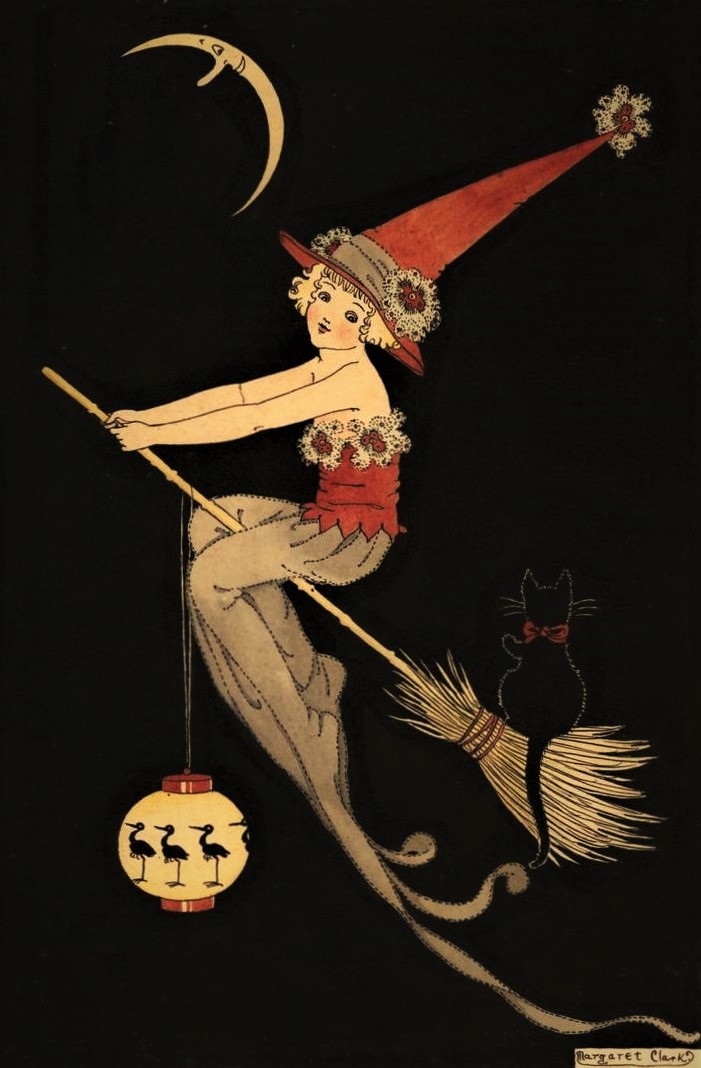 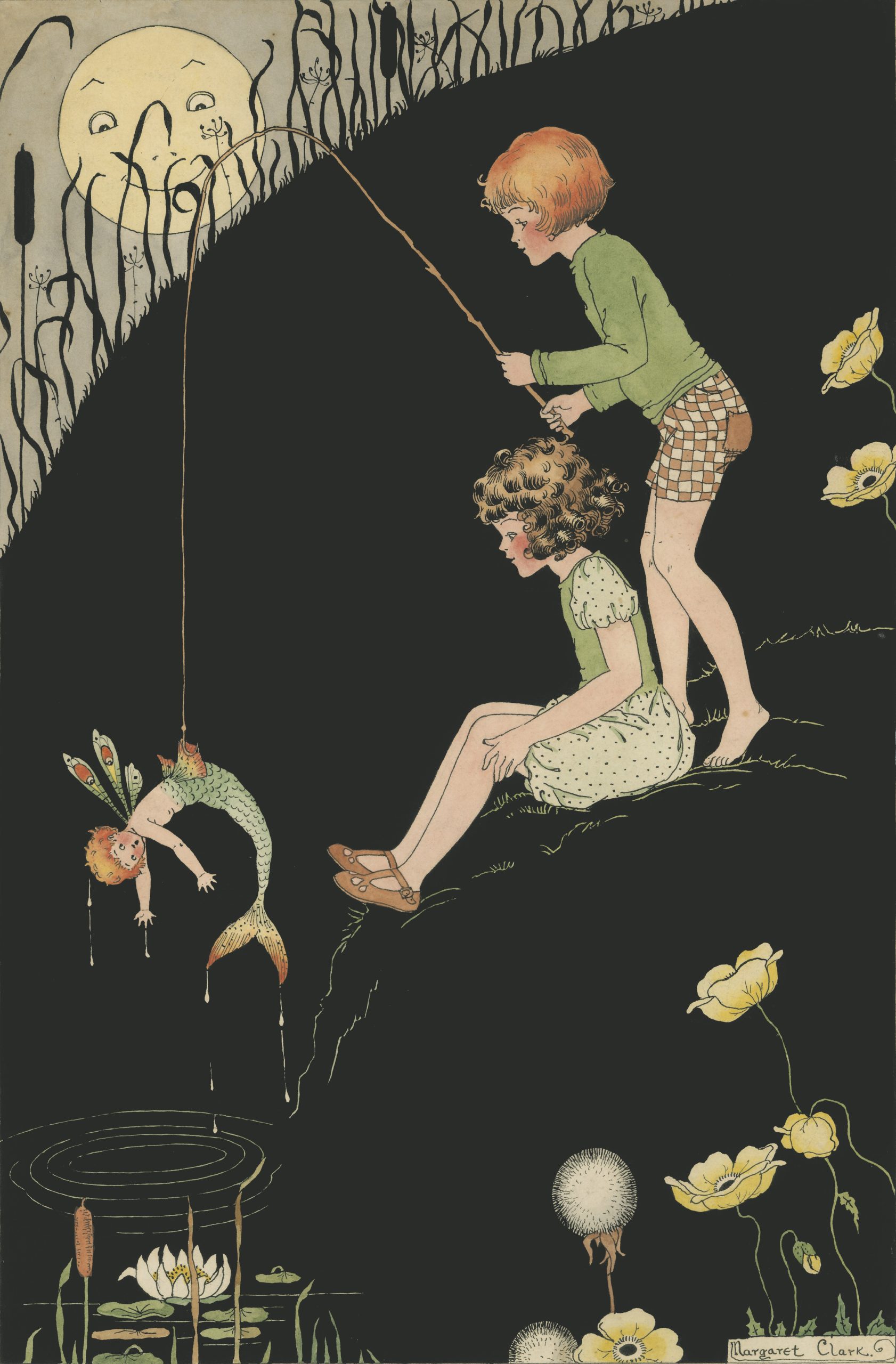 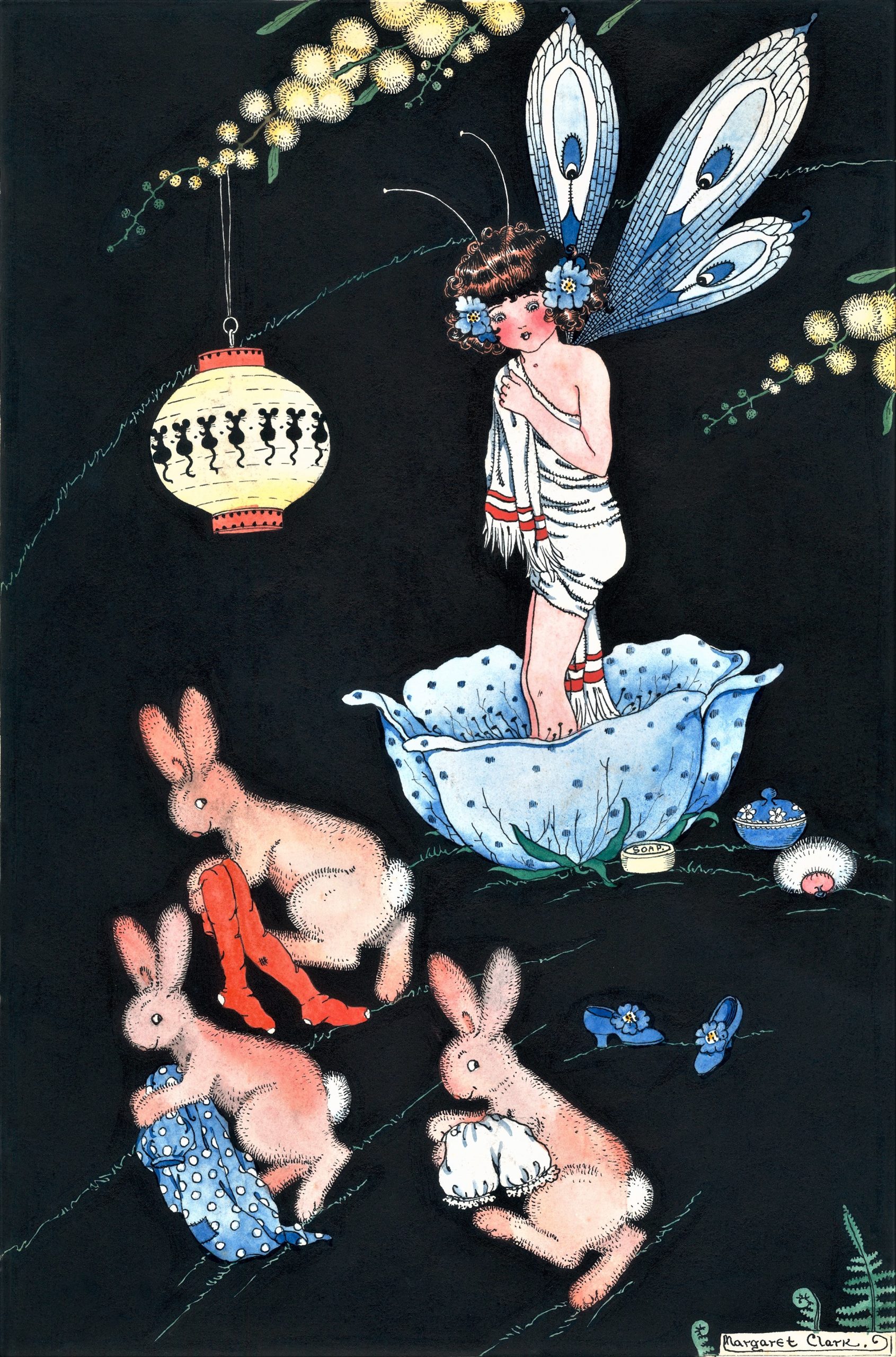 The Fate of Trees

The Fate of Trees