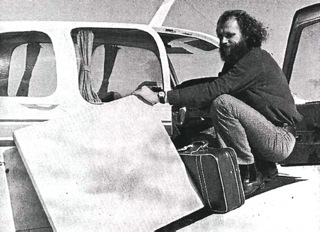 I arrived at the point in my life when, at some inner level, I made the decision that I wanted to make art my life work. This would have been about 1957 to 1960 and I guess the commitment came on gradually. The art scene in Brisbane, my home city at that time, was anything but supportive of art and artists, but there were some very important people around then.

To name just a few, John Molvig, Charles Blackman, Andrew Sibley; both Molvig and Sibley were important teachers for me. The life style with these artists then was bohemian and certainly out of step with conventional Brisbane at that time. Andrew Sibley John Aland and I shared part of an old building in Petrie Terrace Brisbane.

Molvig and Sibley became very good friends for the remainder of their lives. Roy and Betty Churcher were also in Brisbane and they remained close friends. Established art galleries like the Johnson Gallery, were showing some figure subjects, but mostly landscapes and in a style that was essentially conventional with an influence from the impressionists.

However I remember the standard of the work was very accomplished and professional. In stark contrast to this, the work of John Molvig was confronting and yes, brutal; Charles Blackman’s paintings told stories as did Andrew Sibley’s which were very stylized, mostly painted with paint scrapers and palette knife.

Although I had a conventional art training behind me I was attracted to the new and the contemporary. Although it was possible to show modern work in Brisbane, most contemporary artists depended more on showing in Sydney with galleries such as Rudy Komon, who was such an important support for new art. Komon supported John Molvig for many years and I was fortunate enough to have his financial support (virtually wages) for three years to have two one man exhibitions with his gallery. My work was influenced at first by Blackman who I met later when he lived in Sydney, by molvig and by Sibley, then later by John Olsen.

There were too many artists at the time to mention them all. They were all working furiously away under the blanket of conventional Brisbane. I depended very much on teaching to survive and became very involved in it’s potential to change people’s lives.

Teaching and painting in Brisbane remained satisfying for me until I decided to get my pilots license and take contemporary artist’s thinking through teaching to isolated and distant places in Eastern Australia and the Torres Strait. This was something I am so glad I was silly enough to do. A dear friend and important Sydney artist Guy Warren, who was the first person I told that I was learning to fly to create the flying art school, said when I told him. Merv, you are the only person I know who would be silly enough to think of such a thing, but you know it just might work.

This retrospective exhibition pays tribute to Moriarty’s substantial influence on the development of the visual arts in Queensland. He has been an inspiration to three generations of artists Australia-wide, particularly through his teaching and establishment of Brisbane Institute of Art and The Flying Arts School (now Flying Arts Alliance).

The timing of this exhibition coincides with Flying Arts 45th Anniversary. 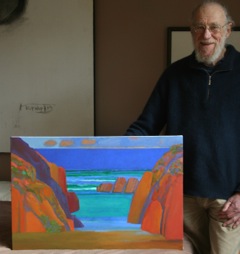