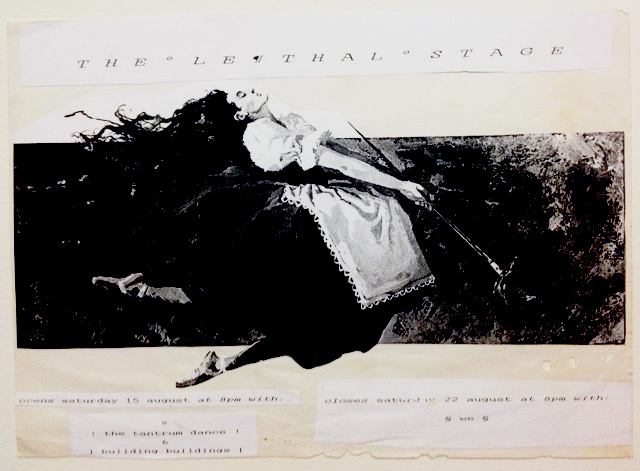 i am writing this on the eve of bowie’s death and i am absolutely overcome by desire/grief.

this means that i will die too.

the bleeding ink on my wrist reminds me to

… and i remember the kind of chaotic madness that exists in the solidus. i remember an overwhelming desire for sex and sudden death, to fall to my knees with a sword at my heart, head flung back in ecstasy, flying towards an ultimate intensity with the hair of a girl or a queen, a queered queen of queens. such are queens.

all this resonance is making it hard to write since i am not sure where they end and we begin.
when aliens dream of one another.

<memoir> in the eighties, in brisbane, when my keystrokes were in disarray i was once told many times by the gentleman at the antiquarian bookstore in the elizabeth arcade that i looked like a francis bacon painting. i understood what he meant. </memoir>

the image for the poster came from a book called “the splendor book of ballet”. i had had it since i was a child, and it was the repository of a lot of melodramatic childhood dreams. it was an affective object, an object which triggered strange nauseas and peripheral desires. the book told the stories of many classical ballets, including the ballet giselle. it was very dramatically illustrated, with giselle in flight, hair streaming, surely on a trajectory towards a beautiful annihilation.

the craft of poster making. i photocopied the image and cut and pasted bits and pieces. used a bit of whiteout and some stickytape. in my memory giselle is flying through the air with a sword held to her heart. i might have altered the image to add the sword because the original illustration does not have the sword. urszula told me that when she saw the poster on the door, which i had hand painted with red paint on the black and white photocopy (dancing was always blood red to me), she decided not to come to the performance, because she had a portentous feeling. melodrama was my forte.

the performance had a soundtrack which i had made using a cassette tape player, taping over the protection holes to create a makeshift multitrack recording tape. jo forsythe showed me how to do this. she was running hip hop and breakdance and rap workshops with kids. we all wore “fresh dogs”. i think the soundtrack was some pretty treacherous noise; a screaming voice, I believe, looped over and over again in an unbearable never-ending trip to hell. i liked it. i think i was also sing/chanting.

one thing which has always been consistent about me is my fidelity to nihilism. i was – always am – verging. this performance, with its noise, nudity, golden axe wielding and grotesque body shaping typified this pretty well. i was struggling to bust out of my middle class mores and the axe was carving out a space of hope. i was working through some mental health issues and wondering what a feminist could be and what feminist art might look and sound like. i was unlocking some morphogenetic potential. a queer becoming was dawning upon me. such are queens.

i remember that night quite a few people watched from the street, standing outside on the footpath, looking through the door or through the windows (i guess standing on boxes. milkcrates?). this was pretty standard on jmn performance nights, since one never knew what sparks, bodily fluids or toxic substances might fly or spit or spew.

there were three screens i was performing in front of and in front of the second one i was setting about destroying a precious jeweled object, like a coral reef or something. swinging that golden axe about my head and bringing it down. i was dressed at this point in bandages, scantily. again, a prescient costuming move! so i brought the axe down and it sliced through my foot, its trajectory thankfully stopped by the floor. Flinging the axe to one side, i kept writhing through the performance, continuing the exorcism of moral demons and overwrought post-teen, middle class white girl angst until at one point, slumping down the wall and onto the floor, i thought to check the damage i had done. and put my fingers into a pool of blood, which by this stage was covering my bandages. dancing on the floor, slower now, the pool of blood frightened me enough to interrupt the performance and take a quick and bloody trip to the hospital. as adam picked me up to carry me to the car an arc of blood sprayed out of the wound. bodily fluids didn’t yet hold the threat of deathly contagion. soon, but not yet.

the hospital staff were predictably bemused and amused by my getup and by the injury. the hospital keystrokes marked up a story of a body, wounded, self-inflicted by a golden axe. we told them, my friends and i, that we were performance artists and they nodded ahhhhhhhhhh and went about their business.

the skin on that part of my foot is smooth and nice/weird to stroke now, in absent-minded moments. wounds are <memoir>. the poster is long lost. there are no photographs.

addendum: in the files of the queen of all archivists (jane richens) i found the original poster, not the one that was pasted to the door, not the one covered in red pain[t]. the image did indeed already have the sword in it and so i think the poster image came from another book, but my original attachment was to the image in the “splendor book of ballet”. 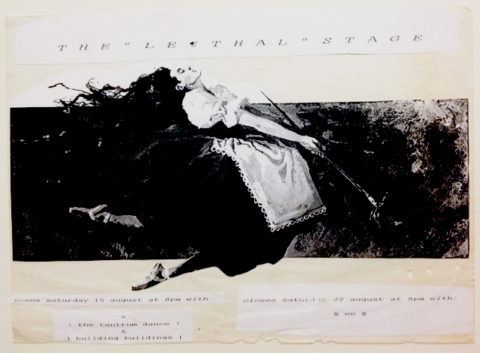 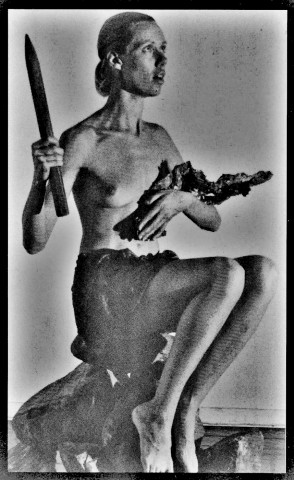