The Australian Centre for Contemporary Art launches it’s NEW11 exhibition, showcasing what the gallery deems to be the best in Contemporary Art. Paul Andrew explores what exactly ‘NEW’ means.

If you get the feeling the title of his work sounds something like the title for a seventies concept album you’re vaguely on track, Moynihan adores pop culture, film in particular. According to NEW11 Curator Hannah Mathews, Moynihan’s most vital artistic influences are largely cinematic: “heist films are his favourite.”

Mathews is clearly a fan of Moynihan’s brand of heist schlock, she enthusiastically recounts two of his most recent installations.

“ It’s all good clean fun with Dan, outdated humour, grand-dad style humour, a terrific Groucho Marx mask on a grand scale, and at the Hell Gallery in Richmond last year, a supermarket heist titled, In and Out, No Funny Business , a bunch of robbers sitting around in the supermarket drinking strawberry milk, rough sculptures made from crumpled newspaper and polystyrene foam dressed in heist gear, a parody of all those Pink Panther and Ocean Eleven films, the familiar phrase- get in, do the robbery, get out quick -for Dan, drinking strawberry milk during a heist is just plain common sense.”

Mathews has completed a number of successful residencies overseas since completing her curatorial studies at University of Melbourne in 2002 and was invited by ACCA mainstay and long-serving artistic director Juliana Engberg to curate NEW11 after contributing to ‘the curatorium’ for NEW10. On a serious note, careful not to mention actual figures, Mathews hints at just how lucrative these annual artist commissions are.

“The Balnaves Foundation fund these annual commissions, they are long- term supporters of the arts. Their commitment to the NEW exhibition series has enabled ambitious and exciting work to be made by some of Australia’s most interesting artists. Based on the German kunsthalle model, ACCA has a strong commitment to commissioning new works. This partnership for NEW exhibtions is a good fit, some of the artists have themselves received grants from Arts Victoria, City of Melbourne, the Australia Council and WA’s Department of Culture and the Arts. ACCA is also able to draw on support from its corporate sponsors too.”

For Moynihan, being selected to exhibit in NEW11 is simply an “extraordinary and stressful opportunity “, a rare chance to flex the imagination with a decent budget. Opportunity like this is not without its shortcomings, Moynihan is barely able to string words together while attempting a Herculean feat, fashioning a mountain of sand into his designated gallery recess while perfecting bright hot pink coloured paint just so for the walls.

When asked about an older work, a work recently acquired by a major collection; After the Laughter Comes the Tears, by the Museum for Old and New Art in Tasmania it was easier to chat.” It was a pair of movie seats sinking into a floating soiled carpet”, he says, “with a big popcorn container on its side spilling what’s left and exposing a hole in the bottom.”

We laugh. Relishing the pathos contained by this recent acquisition provides a cue for the curator about Moynihan’s latest install. “The colours are intense, psychedelic, like the packaging of that suntan lotion made from coconut oil that people used to splash all over- Reef Oil. Combine that image with bad movies, think Castaway, the atrocious Tom Hanks flick. He played a Fed Ex agent stranded on a tropical island after a plane crash. He fumbles for ways to survive. It’s a take on an old story, Robinson Crusoe [that] was written back in the 18th century.”

Opus opportunities aside, New exhibitions at ACCA have their share of critics- venting spleens about unnecessary celebrity, about excessive funding, about artists-as-spectacle, the dated modernist “newness” concept and the institutional chestnut- “ NEW, says who?”

In January, Trocadero –a popular ARI [ Artist-Run initiative] in Footscray presents its own annual awards exhibition, NEWer highlighting recent visual arts graduates including artists like Matsuri Yamana who produce art by more humble means. Artist and Trocadero organiser, Anne Kucera explains, “ACCA’s NEW series is certainly a reference point for these things and the gallery committee played on the idea of ‘new’ in its context of ‘unknown/known’. Being practicing artists ourselves we found that ACCA’s new shows tended to exhibit artists we already knew; artists we have seen exhibiting for years. It baffled us as to why the show was called ‘new’.

“To us, they weren’t new at all- great artists yes, but they weren’t ‘new on the scene’. Our sense of ‘newer’ was not necessarily artists who already fit the familiar Gertrude Contemporary Art Space curatorial styling or those who have already shown extensively in contemporary art spaces, no, we wanted to show ‘new’ work, unseen work, maybe even work that will be seen in ACCA’s NEW show in a few years time.”

Kucera adds that like Moynihan, RMIT Graduate sculptor Matsuri Yamana also creates ‘good clean fun’, immersive environments with a feel for paradise. “The sensibility of her work is beautiful. She made these amazing billowing clouds from cotton balls, wadding and chicken wire. She had a ladder which you could climb and then engulf your torso completely inside a cloud.”

While art debates continue, artists like Yamana and Moynihan get on with making installs that enthrall. Moynihan sums it up as such: “ Humour for me is the process of amusing myself, extending that to an audience via the installation can be tricky, being laughed with or laughed at doesn’t really bother me, a laugh is a laugh is a laugh.

‘How does Moses make his coffee; Hebrews it.’ That’s the stuff that inspires me. ” 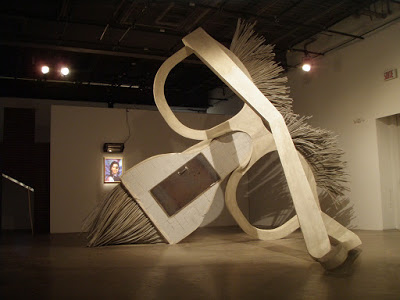 Dan Moynihan gets all ‘Groucho Marx’ in this photo just above in 2010 before creating ‘Paradise’.

For more information about Trocadero including their annual NEWer Awards exhibition for recent art graduates;