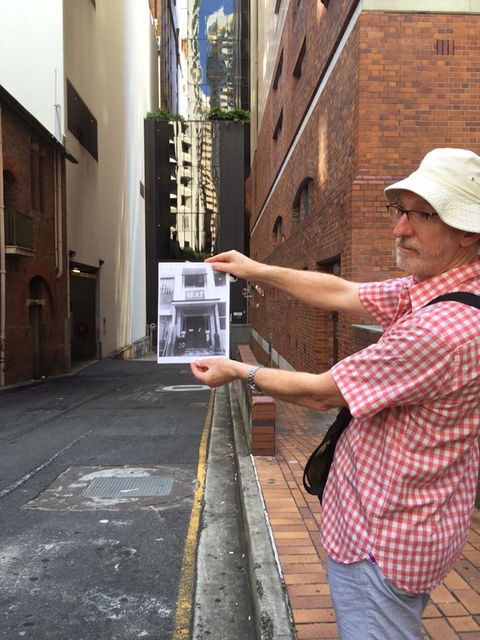 UQ Art Museum’s 2012 exhibition Return to Sender focused on artists who left Queensland during the Joh Bjelke-Petersen era. In contrast, ephemeral traces: Brisbane’s artist-run scene in the 1980s shares the rich history of five artist-run spaces – One Flat, A Room, THAT Space, The Observatory and John Mills National – that operated between 1982 and 1988 within a changing Brisbane landscape, and often against the odds. Exhibition curator Peter Anderson has worked in the Australian arts and cultural sector for over thirty years. As the 2013 Siganto Foundation Research Fellow, Peter studied the artist ephemera and archival materials held in State Library of Queensland’s Australian Library of Art, which also provided a research basis for the ephemeral traces exhibition. We caught up with Peter to find out a bit more about this often-overlooked moment in Brisbane’s cultural history and why he felt compelled to pull the archive boxes out now.

Q: In 1980s Brisbane, what kind of conditions were artists facing that fuelled the establishment of these DIY, artist-run spaces around inner-city Brisbane and can you offer some insight into the mood of those times among artists?
A: When the story of Brisbane at this time is told, a lot is said about its social and political conservatism under the Bjelke-Petersen government, the corrupt and capricious way the police force operated, the mad rush to demolish and rebuild the city, and the way big events like the Commonwealth Games of 1982 or World Expo 88 were heralded as moments when Brisbane would finally be put on the map. But I think there was something else that confronted artists at this time, Brisbane was so often described as ‘a cultural desert’ that even when things did happen, they didn’t seem real – it was as if art only happened somewhere else. For a young artist in Brisbane there simply was no clear path to follow, particularly if your interests were not mainstream. In the late seventies the DIY approach of the punk music scene, the creative and cultural activities linked to left-leaning politics and the opposition to Joh provided an important context for the development of the artist-run scene – of course, you could go (as many did), or you could stay and try to build something. In lots of ways, leaving was the easy option.

I suppose for many of the artists who stayed and worked to build the artist-run scene, including exhibition spaces and organisations like the Art Workers Union and later the Queensland Artworkers Alliance, there was a certain sense of defiance – rather than complaining that nothing ever happened it was better to simply get on and do something about it.

Q: Through your research, you’ve uncovered a great volume of information, artwork, artists and ephemera from the time – how have you managed to put parameters around the period for the purpose of the exhibition ephemeral traces: Brisbane’s artist-run scene in the 1980s?
A: As someone who was actively engaged with the artist-run scene across this period, I was aware of the rich body of ephemera and other traces that might be available. My strategy was to start with the ephemera rather than working from artworks that might have ended up in public collections. In part this was because I wanted to think about the artist-run scene as whole, rather than selecting well-known artists – artists who might be considered as more successful – and tracing their origins back to this moment. Many of the artists who were key figures in this scene really don’t have much of a presence in our public collections. In fact, important areas of practice such as performance, ephemeral public art, and installation are barely visible.

Rather than simply trying to make an exhibition about art in the eighties, I wanted to draw attention to the creative energy of the artist-run scene, and the way art practice in this field is often just as focused on making a space for creative activity to occur, as it is on making traditional artworks.

Looking at the way artist-run activity developed, the period between 1982 and 1988 seemed to offer a particular ‘moment’, not only because of the networks between spaces and other activities in Brisbane, but also because this was a key period for the development of ‘alternative’ and ‘artist-run’ spaces nationally.

Q: Can you tell us about your decision to delve into this project and tell the story of this era of Brisbane’s cultural history?
A: It’s probably fair to say that while artists learn quite a lot about the general history of art, I’m not sure there’s as much effort put into learning about what has gone on in their local context – most artists probably know more about what happened in Paris at the start of the twentieth century, or New York over the past half-century or so, than they do about what happened in their own city. And to be honest, for most of them, it is the city they live in that provides the first direct context for their practice. I have been surprised at how little many artists involved in today’s artist-run scene know about the local origins of this area of practice, so for me, this story is an important part of the history of the present, and the recent past.

Of course, with the internet, everything is apparently available – but as the beginnings of artist-run practice in Brisbane happened in the immediate pre-digital context, so much of the record of what went on is only available as hard copy, in archives and personal papers. So in part, the idea for doing this exhibition was to provide a context for bringing this material to light for a group of people who now mostly source their information online.

Q: How have friends and colleagues involved in the scene responded and in what way?
A: Well perhaps the most significant reaction of colleagues within the scene has been to dig through their archives and memories. As this project has developed there has been a significant reconnecting process going on – one of the tools we’ve used to do this has been through a group on Facebook (currently with around 450 members). There’s also a parallel online project that Paul Andrew of THAT Space has developed, an artist-run archive and memoir site remix.org.au. So even before the exhibition has gone up, there’s been a significant amount of remembering and rethinking about the history of local, artist-run practice within the online environment.

A few years ago, an online search for information about the artist-run scene in Brisbane in the 1980s would have generated very little information – so much so that you could be forgiven for thinking that nothing happened. But these days there’s a growing pool of images, recollections and information. Hopefully, ephemeral traces will prove to be an occasion for further thinking and rethinking about this important aspect of contemporary art infrastructure and creative practice.

ephemeral traces: Brisbane’s artist-run scene in the 1980s opens at UQ Art Museum on 2 April and runs until 26 June 2016.

on 02 December 2015, in The Ephemera Interviews

on 02 December 2015, in The Ephemera Interviews