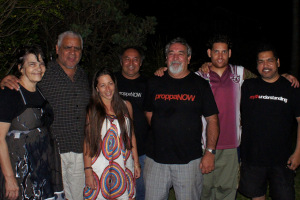 proppaNOW is a Queensland Indigenous arts collective, first conceived in Brisbane in 1997 with the collective taking shape in 2003

There have been a number of proppaNOW shirts created since we started, but this is the first set where each artist has created their own design. These limited edition artworks/shirts were available for sale at the Boomerang Festival (4 – 6 October), with remaining stock available directly from proppaNOW afterwards.

If you would like to purchase a shirt, all shirts are available from the Dark and Disturbing online shop. Click here to see the proppaNOW collection: http://www.darkanddisturbing.com.au/product-category/proppanow