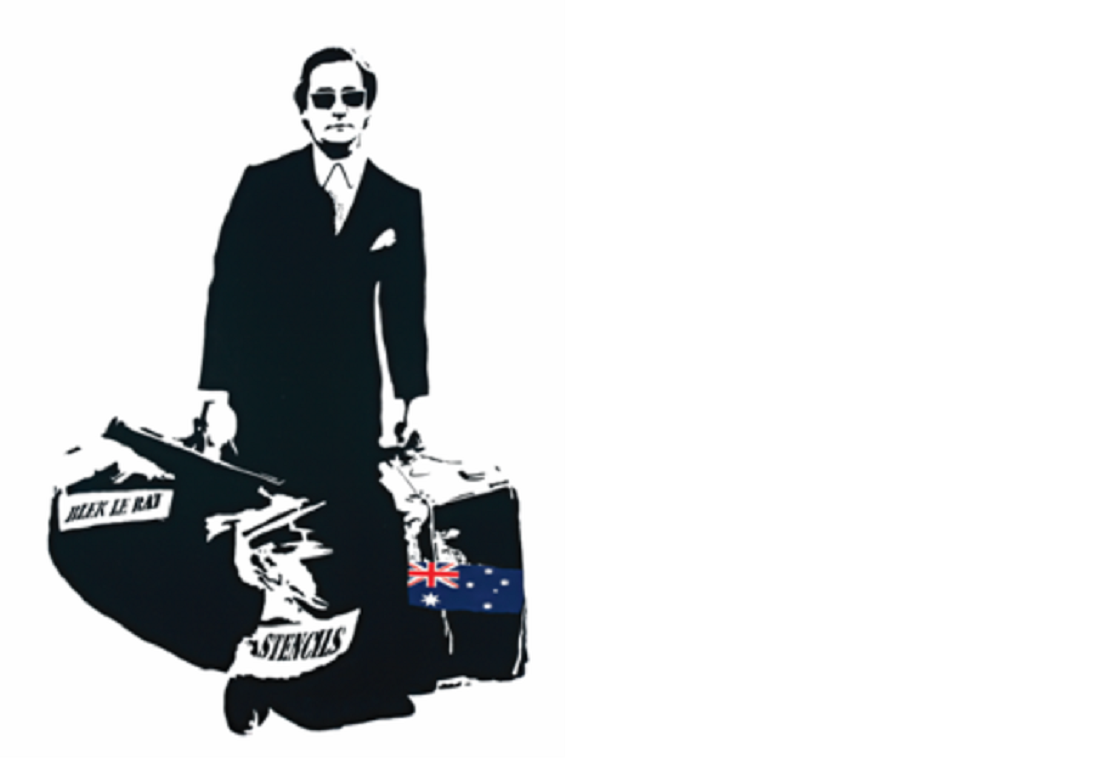 “If an artist is able to consecrate his work to a cause, it’s the best art that can be done. What could you ask more from an artist? Nothing. To me, art must serve a cause. Not a militant cause or political, but social.”

Blek Le Rat lets the rat out of the proverbial with artist writer Paul Andrew. His stencil work is featured this month in a survey exhibition at Melbourne’s Metro Gallery.

In the art world it is a well known fact that long before stencil supremo Banksy made the global A- list there was a humble Frenchman named Blek Le Rat. Today, this silvery 58 year-old family man is still stenciling city walls, still transgressing the law with poetic images and urgent social comment. Almost three decades after beginning these provocations “Le Rat” is finally receiving the recognition he deserves. “I am so grateful for this man”, he says of Banksy in a soft Gallic voice, “ he has helped me so much recently; his comment suggests a wise and respectful artist; he has opened doors”, reveals Le Rat while referring to that now famous Banksy quote – Every time I think I’ve painted something slightly original; I find out that Blek has done it as well; only twenty years earlier! And he adds that
were it not for the Banksy comment, his life’s work would remain largely unknown outside of France and his role as a serious artist seriously discounted.

“A personal history of graffiti art? In Philadelphia in 1967 there was Cornbread, we believe he was the first to tag streets with his name. Two years later, Taki 183 was the first New Yorker to tag subways. Tagging caught on, exploding during the early1970s. There was nothing at all like this in France. In 1971, I was 21 and made my first trip to New York. I noticed crowns depicted above the tags. I was fascinated by them; but these people have no relationship to Kings or to royalty I thought. A friend told me tags were a means for marking out gang territory; war borders. For me graffiti really began with Keith Haring. I discovered his day-glo graffiti in the late 1970s. Haring was the first to transform tagging into art.”

For Le Rat, the most vivid memory of all was not this 1971 trip to downtown New York or Haring’s fluoro style but an early childhood trip with his family to the picturesque town of Padova, Italy in 1961. “ It was here on the walls of the city where a series of faded brown stencils seized me. I was ten years old. I asked my father what these stencils were about. My father, a prisoner-of-war in Germany, explained that these images were made by Fascists during WW2. Portraits of Mussolini wearing a helmet- a war hero in profile. Propaganda, dismissed my father. They had survived all those years since the war. I kept this image in my mind for a long, long time.”

In 1981 Blek was an architecture student truly pissed off by the excessive wealth and trappings “paraded” by French culture and state.“ We were social rats. That’s how it felt at the time. So many Parisians living life tough in poverty, in filth, yet the image projected of Paris; so glamorous, so rich. I was looking for an identity at the time, wanting to leave a trace, to be recognised for
something, so remembering that Mussolini stencil I made a stencil of a rat; the shadow of a rat. For two years I stenciled only rats; millions maybe. People noticed them, they appreciated the repetition, the humour, the irony.”

Blek laughs, his gaze distant. “It’s funny, people today in Melbourne, Paris, New York, Berlin; even Beijing, are still stenciling, it’s illegal everywhere I go. Young people need to express themselves, their humour, their world view. I remember one night stenciling those rats when a police car pulled up. They asked me what I was doing. I am making art, I answered. Oh, they repeated; making art, almost embarrassed to have asked me; go on then, go right ahead they urged; art- we won’t trouble you then.”

Recognised as the pioneer of Paris street art, Blek le Rat (born Xavier Prou in 1952 in Paris) has been painting committed pieces in the streets since the early eighties. He is often described as « the father of stencil graffiti ».

When Blek le Rat visited New York in 1972 this was the very first time he had ever seen graffiti in his life. When he came back to France with colourful graffiti images in mind, Blek enrolled at Ecole des Beaux-Arts de Paris to study etching, seriography and lithography. He then went on studying architecture, learning the impact of space and the creative possibilities of the urban environment. He started stenciling the walls of Paris in 1981 – when street painting had not yet become associated with criminal activity – spray-painting small black rats running along the walls of the fourteenth Arrondissement.

He chose the pseudonym « Blek le Rat » in reference to an Italian comic book « Blek le Roc », using « rat » as an anagram for « art ». Throughout the 1980’s, Blek’s art developed from small pieces into life-size characters like the representation of famous Andy Warhol, Tom Waits, Jesus Christ and a portrait of Blek le Rat himself. The use of stencils, whether for depicting rats or life-size characters, allows him the opportunity for endless reproduction.

The world’s most influential stencil graffiti artist, French born Blek Le Rat, is visiting Australia for the first time this month to raise awareness of global social issues through an exhibition of his most iconic works from the last 28 years at Metro Gallery in Melbourne (2-24 December 2009).

Known as ‘The Godfather’ of stencil graffiti art, Blek has had an enormous influence on today’s graffiti and guerrilla art movements, his main motivation being social consciousness and his desire to bring art to the ordinary person on the street. He is revered by street and graffiti communities across the world, including Banksy who said: “Every time I think I’ve painted something slightly original, I find out that Blek Le Rat has done it as well. Only 20 years earlier.”

Perhaps Blek’s most famous campaign was to highlight the cause of French journalist Florence Aubenas who was kidnapped and held hostage during the Iraq War in 2005. He pasted up hundreds of copies of a stencil portrait of Florence throughout Paris and the image soon found its way onto the front pages of newspapers, magazines and television screens worldwide, prompting global awareness of her plight.

Blek’s career began when he stencilled thousands of rats on the walls of Paris at the beginning of the 1980s, a decade that saw the emergence of a new kind of selfishness, greed, mass unemployment and an escalation in the nuclear arms race. This climate had a profound effect on the imagery and idealogy of his work through which he seeks to draw attention to social issues around the world.

The rat icon soon became synonymous with his name. Chosen as a symbol of the urban environment and said to be one of the few animals that will survive humankind in the event of an apocalypse, the rat appealed to Blek as “the only free animal in our cities.”

From small simple stencils of scampering rats, Blek’s work turned into full size figures, often with classical influences, which urged people to think about what is really going in their lives, in their community and in the world and to encourage them to upset the status quo and create change.

In 1991, Blek was fined heavily in the French courts on graffiti charges. To avoid being arrested again, he began to paste up posters and cut outs of his stencils onto walls instead of working directly on them. Though this alternative technique, he once again turned the whole concept of street art on its head, inspiring and influencing another strain of street art – poster and sticker art.

Blek’s high profile commitments over the last five years have pushed his appeal to a broader and bigger audience across the globe. His universal messages and media appearances in the United States, Spain, England, Italy, Germany, Taiwan, South America and his native France have cemented his standing as one of the most, most applauded and most influential figures in the world of street art.

Today, Blek lives with his wife, author Sybille Prou, and his 12 year old son in a formerly abandoned 10th century castle in France. Born Xavier Prou in 1952 in Boulogne-Billancourt, he studied etching and architecture (a family tradition) at the Ecole des Beaux Arts in Paris before turning to stencil art.

Blek ‘s first exhibition on Australian ground is an iconographic journey featuring 25 of his most famous images stencilled on wooden panels, spray painted on canvas, screen-printed and photographed. “The sky is blue, life is beautiful,” traces Blek’s œuvre from the early eighties to his most recent works. From ‘The Running Man’, depicting a voiceless man screaming out his fears, to ‘The Man Who Walks Through Walls’, a self portrait which Blek leaves in the cities he visits as a message for other urban artists, to the image of a homeless down and out man ‘Le Miserable’ (Victor Hugo), to his distinctive signature rat, the images are universally arresting and haunting.

Why Blek le Rat as a name?

“Blek le Roc [Blek the Rock] was a comic strip that I used to read when I was a kid. Blek le Roc was a fur trader or a trapper in the USA fighting against the British invasion army during the [sic] Boston Tea Party era. I used to love this comic strip, [which was] actually written and drawn by an Italian guy in the ’60s. When I started to make graffiti I took this name of Blek and I changed “the Rock” to “the Rat” because I used to paint rats in the street of Paris and also because in “rat” you can find “art (ie, it’s an anagram).”

What are you working on now?

“For a year now I’ve been working on the poverty and the misery in Paris. It’s hard to believe there are thousands of homeless in Paris. What touched me the most is that I saw children beg. This was unimaginable 25 years ago, to see a child begging in the street in Paris. He was hiding his face, hanging his head down, and I was really touched by this image. I’ve seen people lining up just to have something to eat in front of the railroad station every night. There are lines of 500 or 600 people. It’s absolutely incredible. This didn’t exist 20 years ago. It’s a whole new phenomenon. And we don’t have the right to abandon these people. We can’t continue like this, living in this incredible opulence, driving these cars, watching television, taking vacations, while half of the world is dying of hunger. If an artist is able to consecrate his work to a cause, it’s the best art that can be done. What could you ask more from an artist? Nothing. To me, art must serve a cause. Not a militant cause or political, but social.”