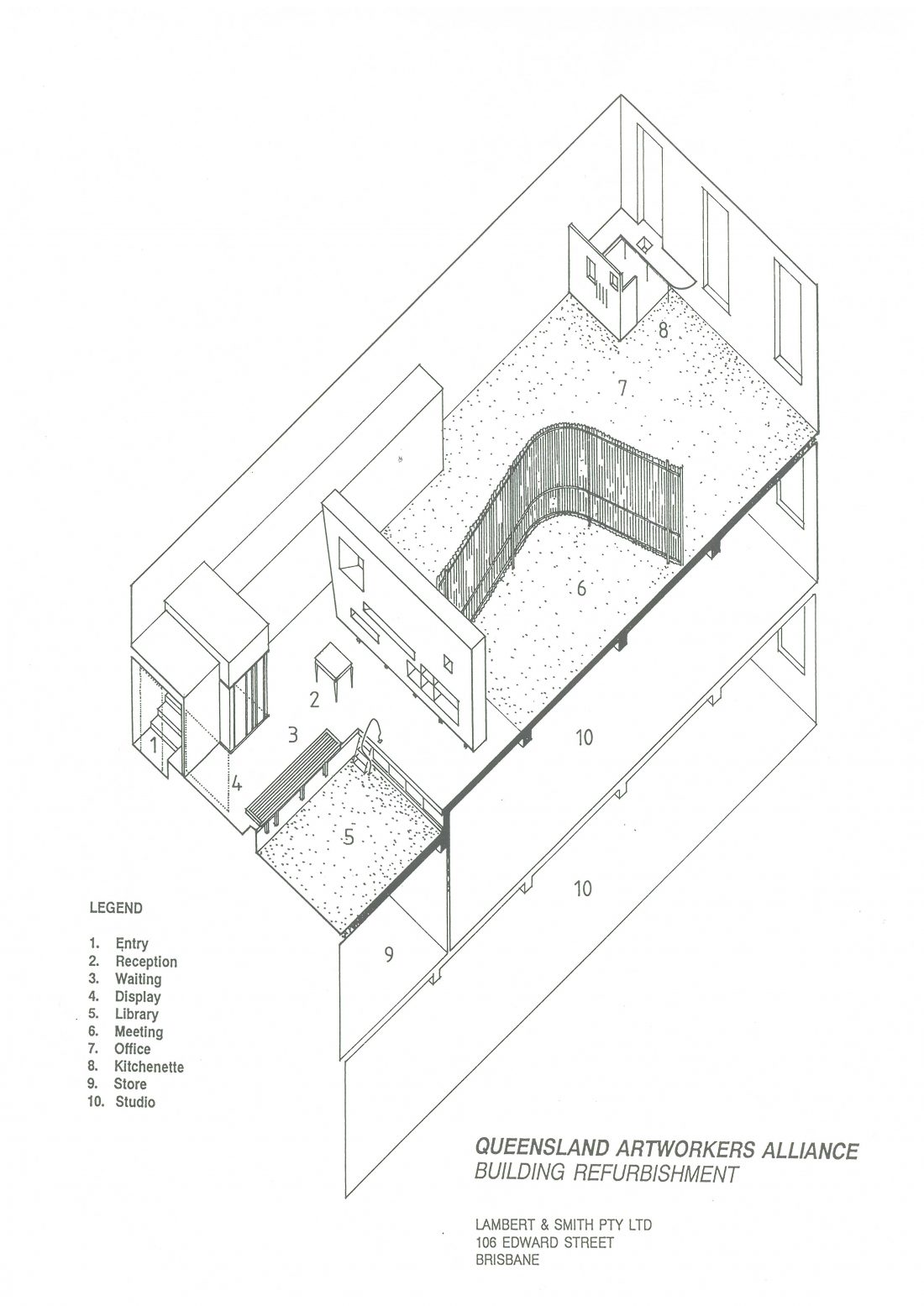 In the 90s Damian Eckersley lived in a warehouse above Isn’t Studios in Fortitude Valley as part of a community of emerging artists and designers. He has practiced architecture in Brisbane and other places for over 30 years. He is known for his involvement with the architects Donovan Hill and is now a Practice Director with BVN.

My introduction to the Brisbane arts scene of the 1990s more-or-less started when I was working with architects Lambert & Smith and escalated when I was living above ISN’T. In the 1990s (c. 1993-95) I was a student architect at UQ and working at Lambert & Smith with Peter Smith, John Price and Antony Moulis in Edward Street. The IMA, then directed by Nicholas Tsoutas, was located in the same building, incidentally along with the Scientologists, and Metro Arts was opposite at 109 Edward Street.

I don’t recall how we got the job to help Queensland Artworkers’ Alliance (QAA) move into their new Adelaide Street premises, but I presume it had something to do with our good neighbourly relationship with the IMA, the tight knit arts community of the time and the fact that we were located in its midst. Antony did some initial sketches and I was enlisted to help. While we were developing the sketches, QAA appointed a carpenter. I called in to the site on my way to work and realized the carpenter had been working through the night, building off our initial concepts without their development, dimensions or any other details. We then helped QAA appoint a registered builder, and things went a bit more smoothly after that.

There were a few key elements of the architectural design. Now demolished, it was an early 20th century brick and timber industrial warehouse building at the Valley end of Adelaide Street, where the Meriton is now located. It was owned by engineer Bill Signato who, as a generous patron, leased it to QAA. As I recall, the building had a big open floor plan without any partitioned space. The top level, with a view to the Story Bridge, was for QAA offices, which included eyeline magazine. While the two or three levels below, were for artist studios. We built an airlock at the Adelaide Street entry, a small anteroom that would enable the artists to come and go on their own schedules.

A large window facing out onto Adelaide Street was retained, the old loading dock became a sunken library with a custom shaped handrail, and a partition on the inside of the roller door reduced traffic noise. We also helped to source some large industrial lights for the artist studios. The office fit out was composed with two ‘floating‘ partitions. Neither partition substantially touched the walls, floor or ceiling. The first partition designated a reception area off the street and was a pale yellow box, punctuated with various apertures, large and small. The second partition was more light weight and designated a space for a meeting room. It was framed with the posts used in tennis fencing and clad with a screen of translucent corrugated green Alsynite, commonly used for the roofs of suburban patios, lean-tos and agricultural structures.

QAA needed to move in as soon as possible. Consequently, some elements like the meeting room were not completely resolved. Once occupied, QAA promptly informed us that the light coming through the green Alsynite clad meeting room had the unfortunate effect of casting a sickly pallor on their skin. John, Antony and myself made some adjustments to the screen the following weekend. John brought along a small handheld circular saw to perforate the Alsynite screen to let in some natural light. Additionally, I purchased a number of standard desk lamps with warm incandescent bulbs to fix to the steel frame and even-out the lighting colour. Just to be sure, we asked Nic Tsoutas, director of the IMA to call in when we were done and appraise the works, and if he saw fit, to give his approval. Tsoutas’ enthusiastic praise receives a special mention in Lindy Johnson’s thank you letter.

Things really escalated when I went to a party at ISN’T Studios where I met David Parry. ISN’T Studios was on level one of 21 Gipps Street, a voluminous five storey building in Fortitude Valley, topped by a gigantic billboard, where Bunk Backpackers is located now. Designed by Richard Gailey in the 1920s for S.A. Best Ltd Process Engravers and constructed by Hutchinson Builders, it is a concrete framed building with timber floors and 4m high ceilings. I moved into the building in 1993, together with my then girlfriend Paula, who was also a student architect. We’d recently been hair models and had been enthusiastically participating in that whole scene — bondage themed hair fashion parades in nightclubs and the like. As a couple of suburban kids, I think we seemed much edgier than we really were. David offered us a room where he’d been the sole occupant of the entire floor. David was a computer wiz who worked in advertising with Malcom Enright and he would stay up all night rendering 3D images.

People lived and worked in the building, although the living side of it wasn’t legal, but that took years for us to realise. There was a real menagerie in the building. Upstairs there was an optometrist, graphic designer Hannah Cutts, and Ross McLennan, drummer for Rubber Bug. Downstairs was the impressive Christine Plotz and the infamous Rod Bunter of ISN’T Studios, Jeremy Hines and Prudence Cumes, to name a few.

The Valley was a kind of wilderness in those days and we were surrounded by vacant lots and abandoned buildings, a kind of ‘terrain vague’. The food was amazing and there were plenty of places to go out, but living there was a whole other thing. My first night was intense. It was noisy, day and night, with trucks including ones filled with livestock, street cleaners to clean up what poured out the back of trucks as they idled at the traffic lights below us. There’d been a small fire a few years before, primarily in the lift shaft, so all access was from an outdoor fire stair at the rear of an adjacent vacant lot, which had formally housed the Jireh Baptist Church that had burnt down earlier in the 80s.

We walked across this site to access our building from the rear fire stair. Amongst the weeds and trash, the rock formation that the church had been built on was exposed and there was a deep rectangular depression which we believed was used for full body baptisms. This was the site for land-art pieces by Craig Walsh and Jeremy Hines. Across the road was a much larger vacant site for the Holy Name Cathedral, now Cathedral Place Apartments. On the opposite corner of Gipps and Ann Streets is All Hallows School and from our kitchen window I could wave to my younger sister as she crossed the road on her way to class.

After a short while, fellow architectural student Dougal Sheridan — of LiD Architects, Donovan Hill’s first employee, now based in Ireland and Berlin — knocked on the door, somehow knowing that David had recently left and that we needed a new flatmate. We soon filled the entire floor (level two) with fellow students, and it became know as the architects floor. Amongst my other flatmates over the years were Ashley Munday and Paul Owen, then working at Bligh Voller, and architect-musician Michael Hogg who would be my long-term colleague at Donovan Hill. Four separate studio bedrooms cost us a paltry $200 a week. We got to work improving the bathroom, building raised bed lofts and other experimental projects. We had a living space that faced North with a full width window that looked out over the Chinatown carpark and across to the TC Beirne building, which at that time was also occupied by artists. Basically, we were in our 20s, we went to uni, we all had jobs, we went to art exhibitions and we went clubbing.

We socialised with artists and all the people doing interesting projects in the Valley. Like Jon Linkins at Doggett Street Studios and later Nicole Thibault and Julian Patterson, who lived between Scrabble and the Zoo. Even so, it didn’t seem like many other people were living in the Valley at that time. The arts scene in the Valley really intensified when the IMA moved into the corner of Gipps and Ann Streets, right across the vacant lot from 21 Gipps Street. Again, Lambert & Smith helped. Principally, by securing council approval to change the building use from commercial to public, and by making the building safe and compliant with standards, whilst minimising renovations.

Unlike the QAA project, the IMA had a real aversion to any overt architectural moves. Everything was painted white. Nonetheless, it was a really interesting time. Nic Tsoutas was a regular at ISN’T Studios. Tsoutas and the IMA were really visible there and their public profiles were dramatically enhanced in that location. Openings spilled out onto Ann Street. We went to every event. I remember we were super excited about Jean Baudrillard, but it was a kind of anti-highlight. His confidence in his English was so low. Every sentence began with the same three words “how you say…”.

In early 96, Fire Services inspected 21 Gipps Street and realised there were 15 or so people living throughout the building. They shut the whole thing down. It turned out that the absent owners had no idea that the real estate agent had been skimming rent the entire time. That’s how it all ended. 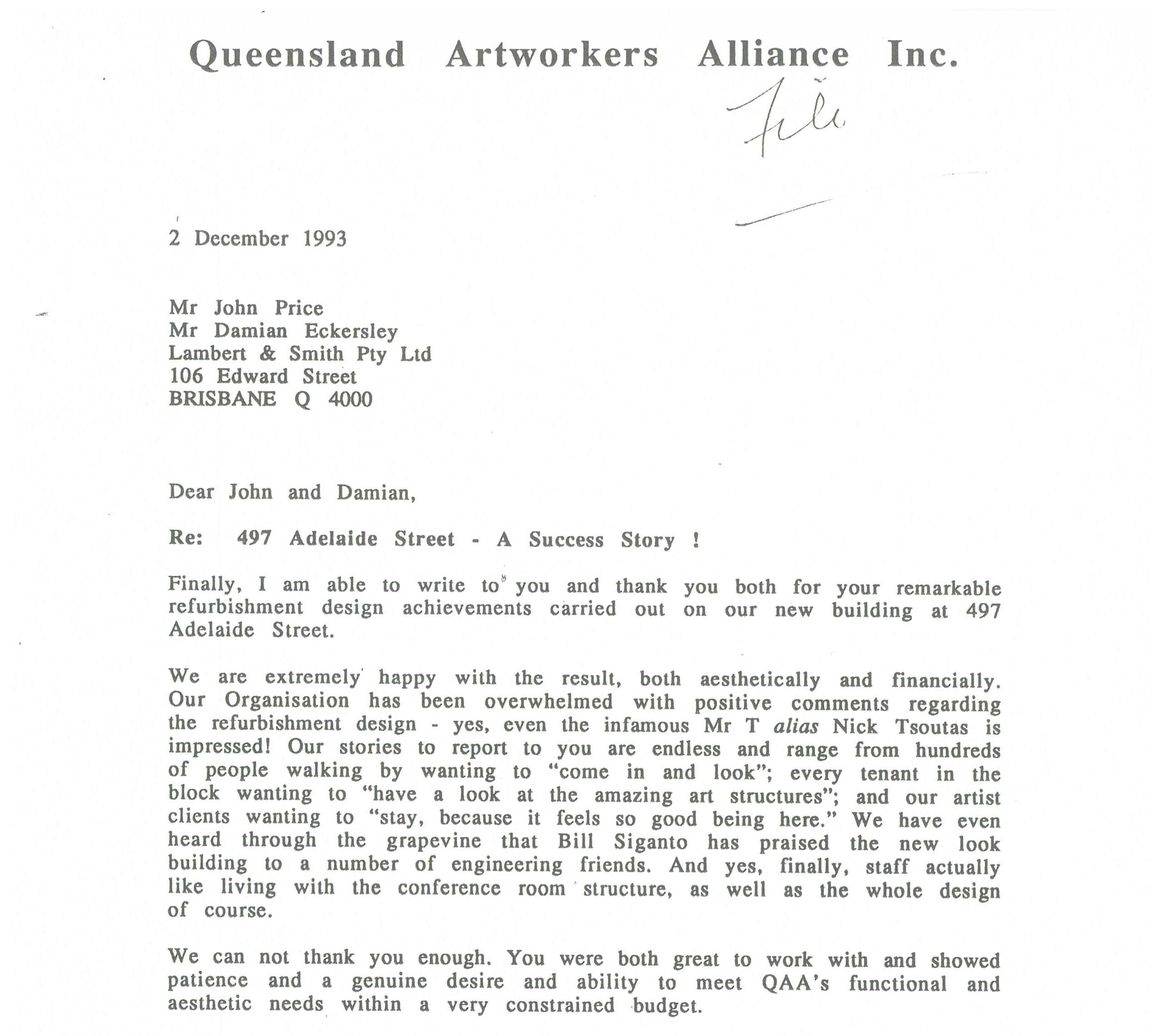 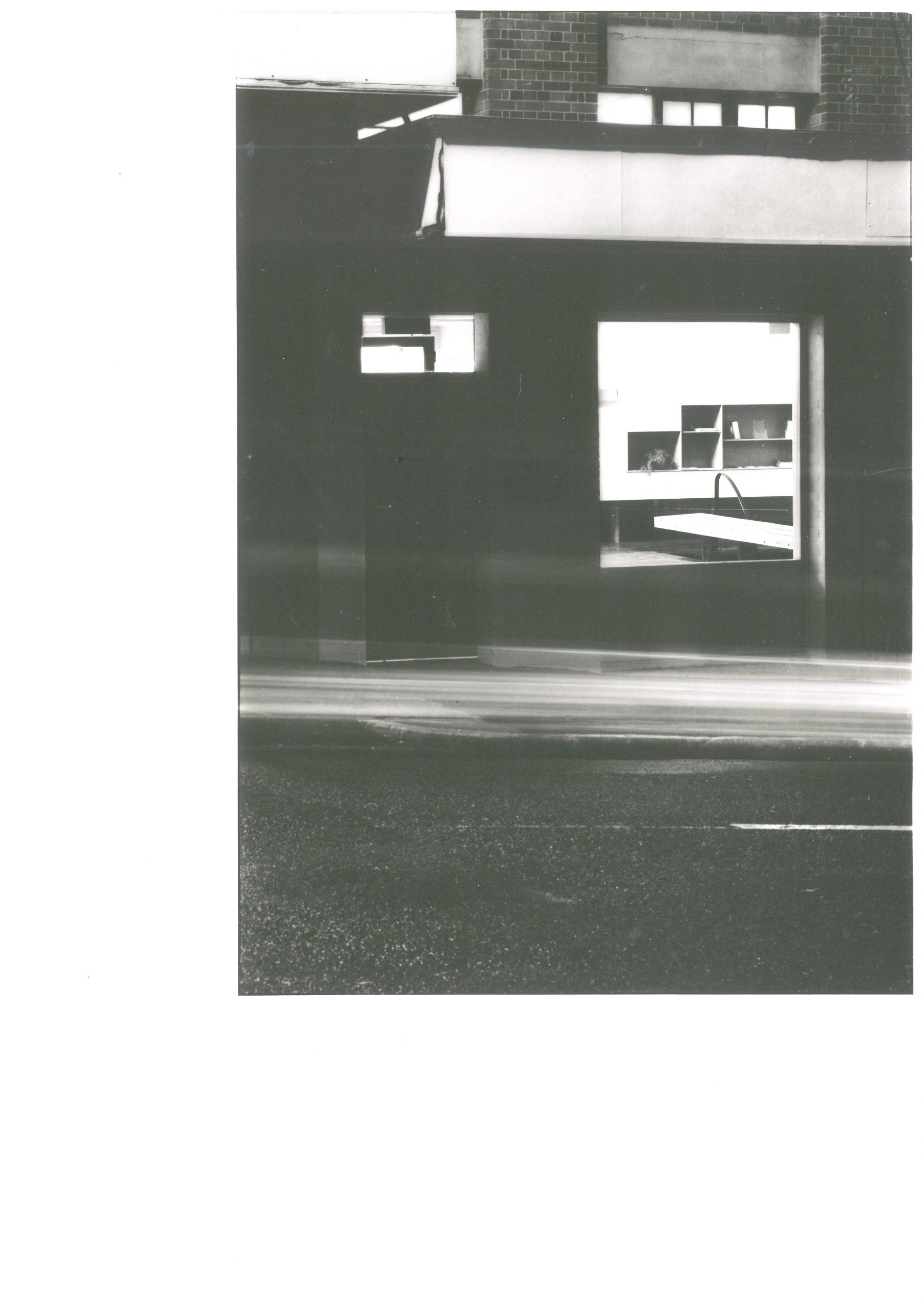 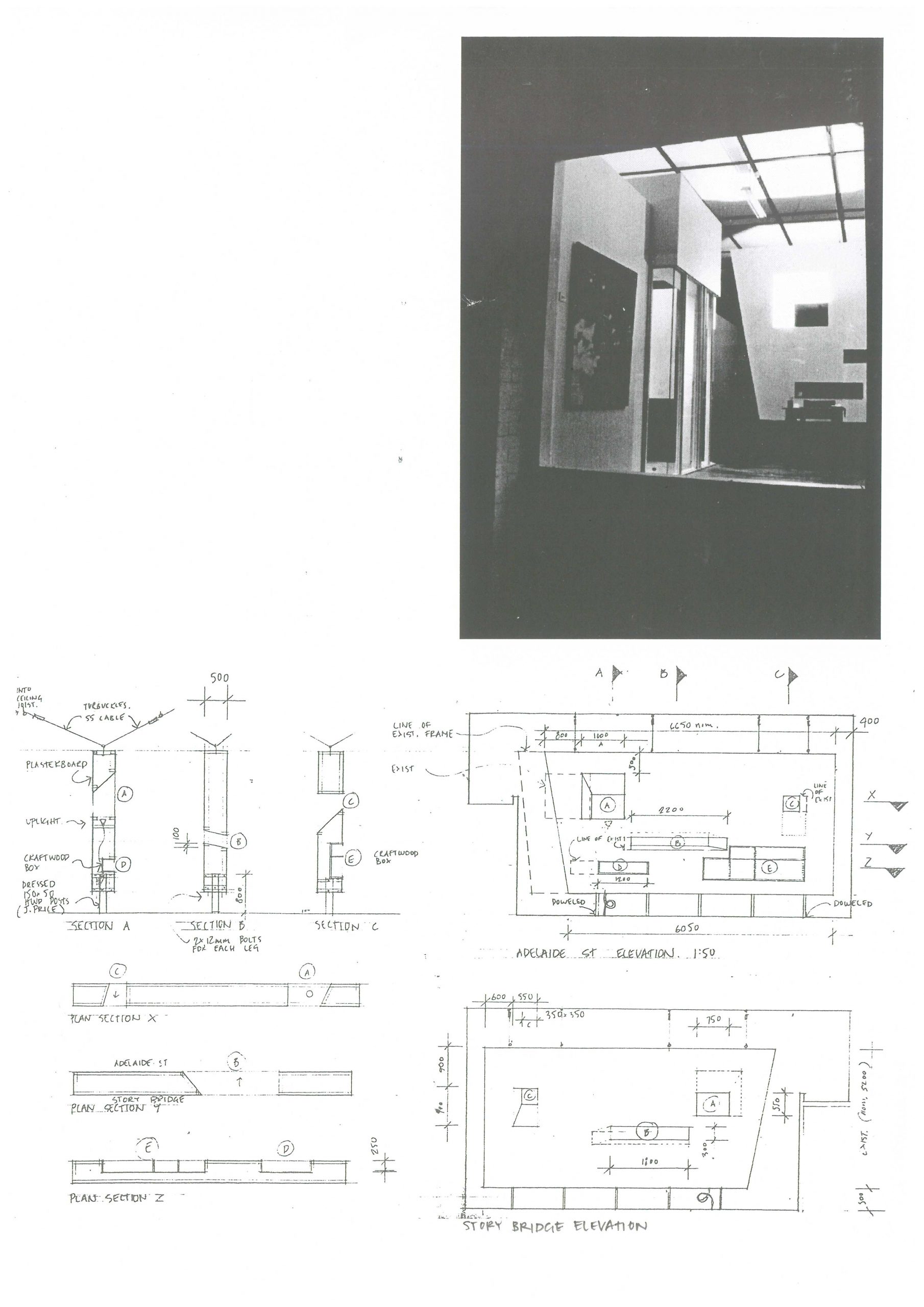 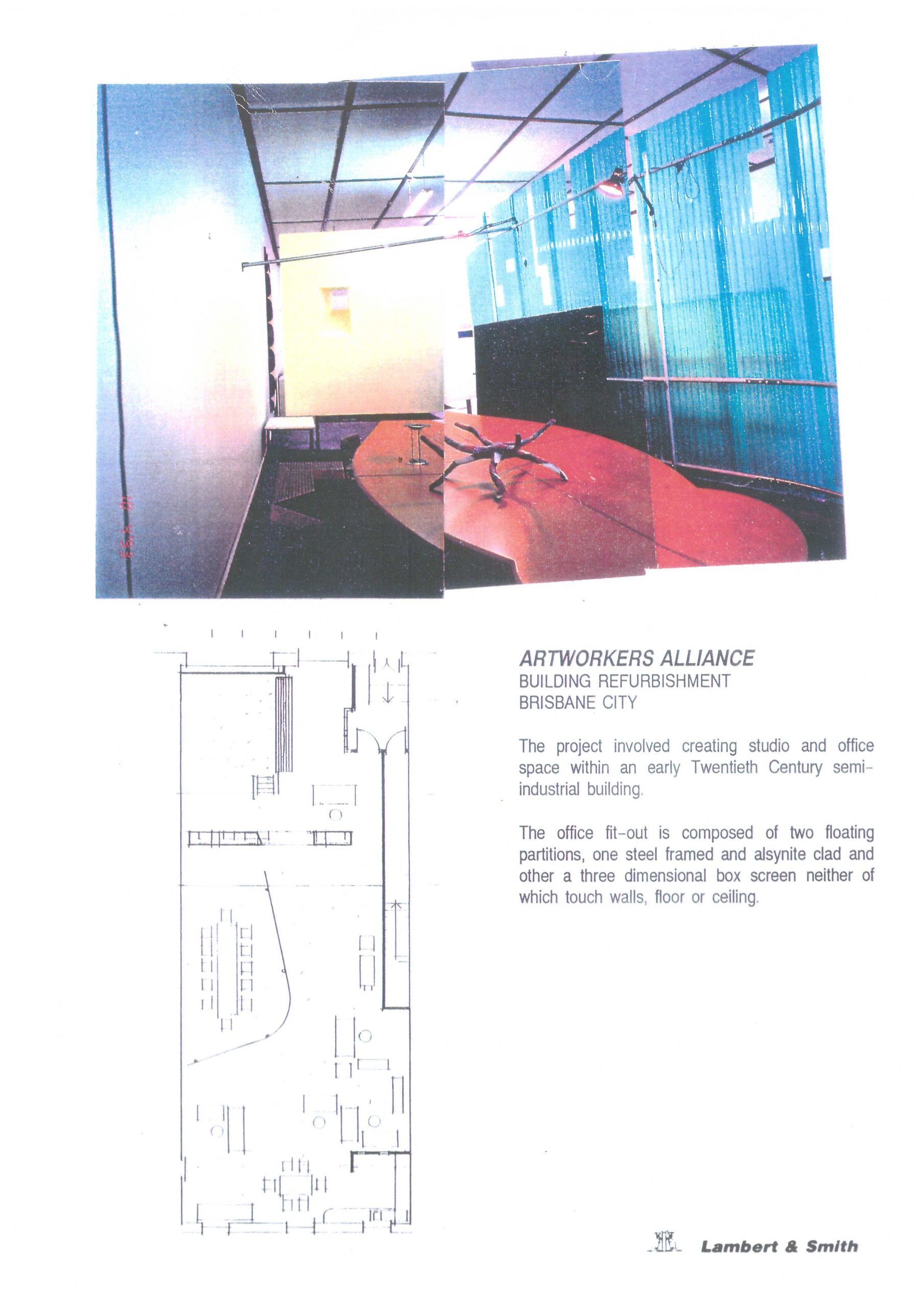 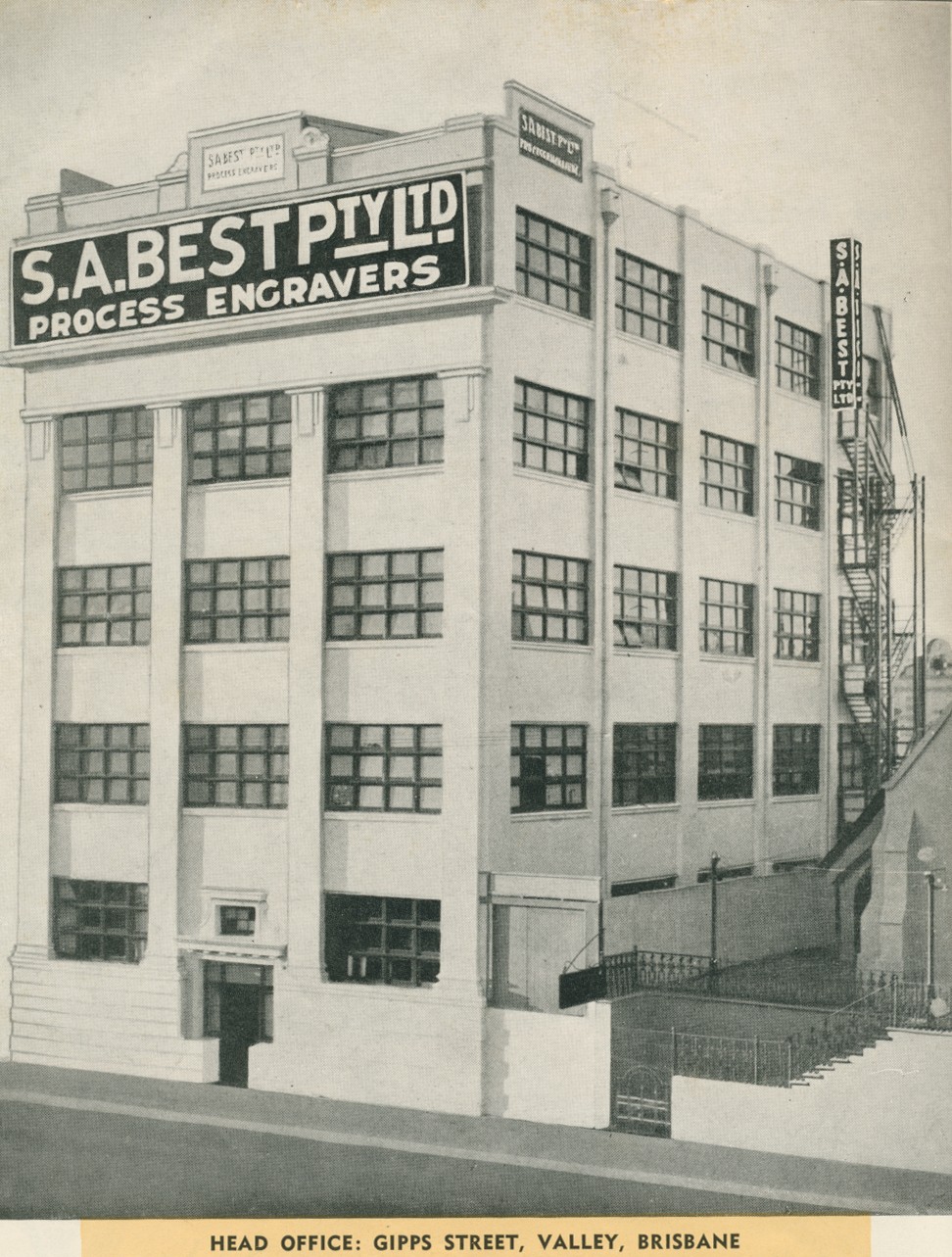