(Re) Presenting 2022 | Sits like a man but he smiles like a reptile …| Performance Artist, queer activist Simon Reptile | A memory by Maggie McNair March 2022

We were instantly smitten and quickly became “besties”, just about living in each other’s pockets. Our friendship had the blessing of his significant others, clothing designer/maker Simon (who had come from Melbourne), the glorious Polly and a tall and extremely handsome Pommy named Graham.

Although Simon was as poor as a church mouse, his little living space was joy to behold. He had the miraculous gift of being able to use what he could scrounge to astonishing effect: I seem to remember an old mannequin’s head draped in lush multi-coloured scarves, loads of bright fabrics draped over old lamps, lots of bling scattered about etc. Truly, a bohemian bliss bomb.

I also worked in a very stylish Paddington restaurant, where Simon arrived to pick me up one night to go to Jools Nightclub in Crown Street. He was dressed in black satin with white feather epaulettes, full make-up and silver platform boots. The entire restaurant stopped to gaze in wonder at this apparition, someone so unfamiliar to their own worlds. He had that effect, even then.

We did have one early-hours-of-the-morning, very drunken sexual encounter (wasn’t I a lucky ducky?) much to the astonished amusement of ourselves and others in the gang. Simon dobbed us in!

After a couple years we began to drift apart: Simon was dancing around non-stop to David Bowie’s ‘The Jean Genie’ and beginning to call himself Reptile, whilst I continued my education, got married, had a baby and ended up as an assistant principal – how the fuck did that happen? I forgot to mention above that  there is a line in The Jean Genie, “sits like a man but he smiles like a reptile”  and THAT is where he got the name. He loved that line! Very important, n’est-ce pas?

The pic from John Mills National, an opening night of performance art; Simon looking contemplative, shows that sweet, beautiful boy that I remember and it has been gorgeous to hear other people talk about him with such love. Seems that we all agree we were very fortunate to be in his orbit, even for a little while… 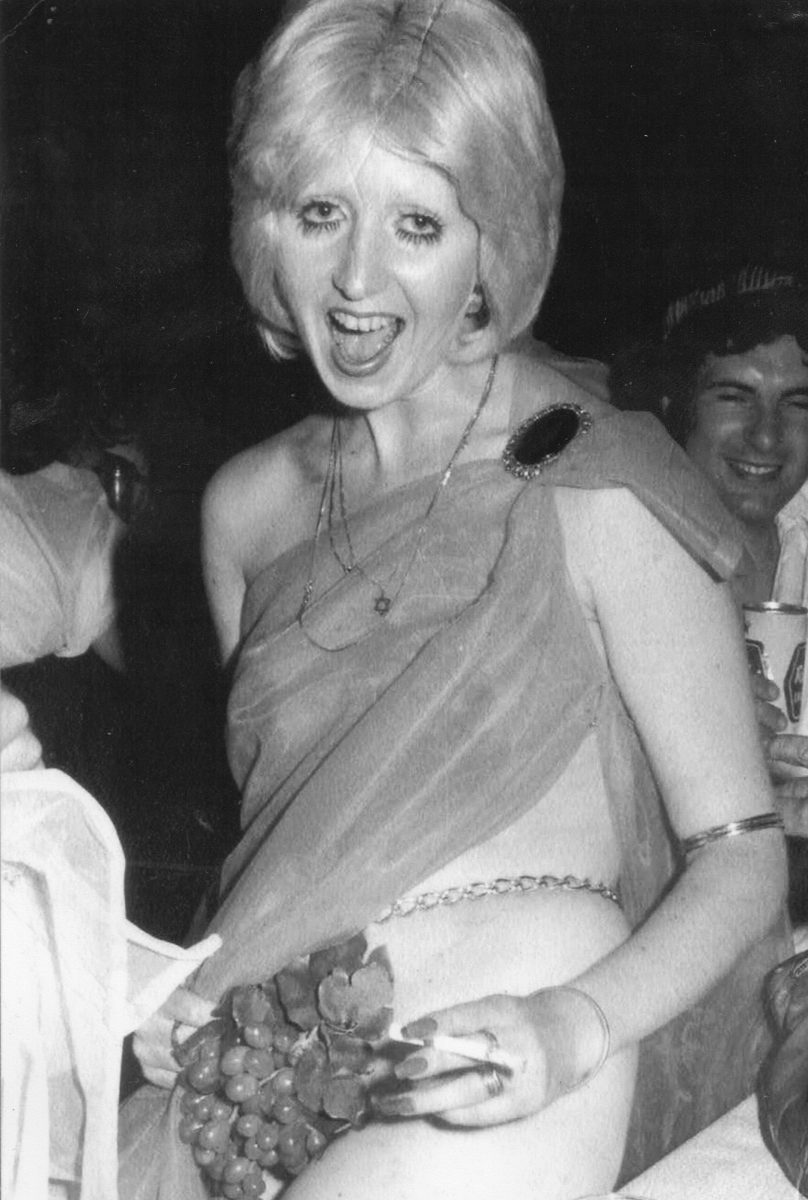 I continued to dress up throughout my many careers and still do, when the occasion arises. I blame Simon. The B & W photo was taken at the University of NSW ‘Bacchus Ball’ some time in the early 70’s. I had a bet with some friends from my father’s legal firm that we would all attend the ball with nothing but grapes covering our genitals. Guess who was the only idiot to stick to the bet? My father advised me to take a pair of knickers in my bag in case I was arrested!