Warning: Aboriginal and/or Torres Strait Islander peoples should be aware that this essay contains images and names of Aboriginal people who have passed away.

My practice is almost always autobiographical. Working across multiple disciplines, I create work based on my experiences that reflect upon, respond and question issues of identity. From a very young age I was always aware of my South African identity, though also confused by it. As a child, my mother always spoke highly of Madiba, whereas my father was hesitant to speak about South Africa at this time at all.

Largely, the confusion began from other people telling me, interrogating me and asking why I did not look like a South African, or rather, an African. I found I was continually justifying my connection and relationship with my African identity, in various contexts. During my MFA (2011-13) that focused on issues and ideas of ‘racial authenticity’, Aboriginal activist Aunty Pat Eatock commenced Federal Court proceedings against Herald Sun writer Andrew Bolt, and the Herald weekly Times. Bolt and the Herald Weekly Times were found guilty of breaching the Racial Discrimination Act, Sections 18C and 18D regarding several online and print articles that racially vilified and humiliated Eatock alongside 18 individuals with articles that ‘conveyed offensive messages about fair skinned Aboriginal people by saying that they were not genuinely Aboriginal’ . This is a historical win that continues to be debated in parliament with right wing government parties pushing to amend the act, as Brandis stated, ‘people have the right to be bigots’ . Further, it also signifies the relevance and importance of addressing problematic and dominant views of identity that succumb to rigid categories of physical visualities that negate cultural experience and self determination.

Returning to South Africa always rejuvenates my sense of self, while also becoming more aware of my antipodean identity in this context. I spent most of last year in South Africa, and completed a studio residency at Assemblage studios located on the outskirts of Johannesburg’s CBD.

During this time I met amazing artists, creatives, poets and musicians, bonding through our amandla spirit and shared experiences of colonial oppression. The term deny, and in its plural forms, denial, denied resonated continuously throughout my residency and through my creative processes. It also is the name of the exhibition of works produced in this residency, first held at Workshop Newtown’s Bubblegum Club.

What struck me strongly was how ingrained physical visualities informed one’s understanding of each other, with no hesitation in asking or expressing. When people saw my research, family photos, newspaper clippings, or articles about District Six, some would say ‘I didn’t know you were Coloured!’ or, ‘I knew you were Coloured when I saw you’. These initial interactions reminded me of experiences I have had in Australia, however these conceptualisations of my identity were also very different.

The works produced in this residency focus deeply on the language and legacies of Apartheid, while exploring experiences of being denied, and my personal relationship to these. I repetitively use the branding of Coloured ™ and the words deny, denial, denied in a series of tapestry works and serigraph prints; while also producing screen prints on mixed-media and a video installation during the residency. The tapestry works Coloured™ #1 and Coloured™ #2 were born in my interest in learning weaving practices, while also family nostalgia, a skill passed down by an Aunty. Extending my weaving techniques progressed as far as finding old canvas in my Aunties garage, and while being resourceful on residency, resumed the techniques she had taught me.

also came across publications dated from 1977-1983 produced by the South Africa Institute of Race Relations (SAIRR); a private institute for research and policy, not affiliated with any political party, that recorded the country’s social, economic affairs and population statistics as well as housing and encouraging progressive activist and arts initiatives. I was extremely drawn to the Population chapter and its section about Race Re-classifications. This had also reminded me of conversations with family about people within the ‘Coloured’ community who were eligible to apply for re-classification, to be White, because they were the “right” skin tone. Members of my family could of, though chose not to. Seeing the high numbers of Cape Coloured to White however made me realise the contentious and complex nature of this process. People obviously wanted to advance their social and economic standing, however this also destroyed families and relationships, further segregating the Coloured community within an already imperial system of separating of people based on ‘race’.

A new generation of South African’s recognise ‘Coloured’ as a term of colonial oppression, however also understand that in some contexts it cannot be necessarily removed so easily. Questioning and discussing the affects of colonialisation and Apartheid on the ‘Coloured’ community have never been more evident, as well as a right to self-determine and connect to their slave and African identity. This reclaiming of the language of ‘Afrikaans’ is becoming known as a movement being referred to as ‘Afrikaaps’ . This is all happening at a time of great awakening in South Africa and its current social, economic and political state. Such issues though specific to South Africa and explored within my arts practice, easily echo issues of identity, Aboriginal justice and experiences of colonial oppression within Australia that similarly is finally being more widely recognised and discussed.

Deny / Denial / Denied, a solo exhibition, is the culmination of works produced by Rich while on residency in Johannesburg. The exhibition opens at Blak Dot Gallery, Melbourne August 3rd running till August 20th 2017. Works from this residency will also be exhibited in Sydney at UNSW Galleries as part of the Freedman Foundation Travelling Scholarship Exhibition, opening August 10th until 2nd September 2017. 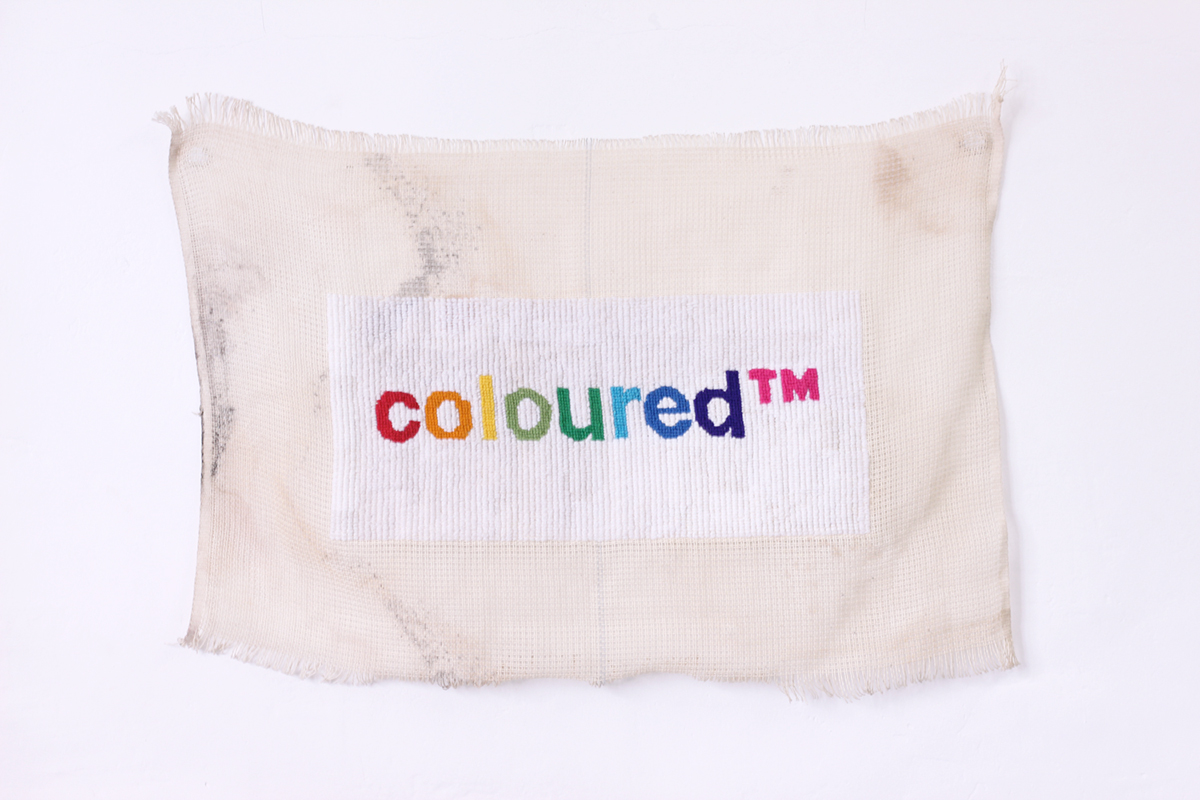 Roberta Rich, Coloured™ #1, 2016. Tapestry with found canvas. Dimensions 75 x 50 cm approximately. Image courtesy of the artist. Partly stained canvas that has a white rectangle stitched into it, as a backdrop for word ‘Coloured™’ where each letter is a different colour imitating a rainbow sequence. Roberta Rich, installation view of (left clockwise) 192 Denials in ’78, Coloured™and 152 Denials in ‘79, framed serigraph prints on paper. Photo by Zelé Angelides. The artist stands at the centre in-between her artworks that are out of focus in the background that includes a young male of African ethnicity, facing one of the artworks on the right and is taking a photo on their mobile phone. The artist is wearing their hair in two buns with sunglasses resting in-between them on her head, large gold hoop earrings, a gold chain, and black t-shirt with gold letters alluding to read ‘Colouredtm’ underneath a gold and black embroidered dress. Her one hand is cupping her other clenched fist and looks at the camera with a slight smile. 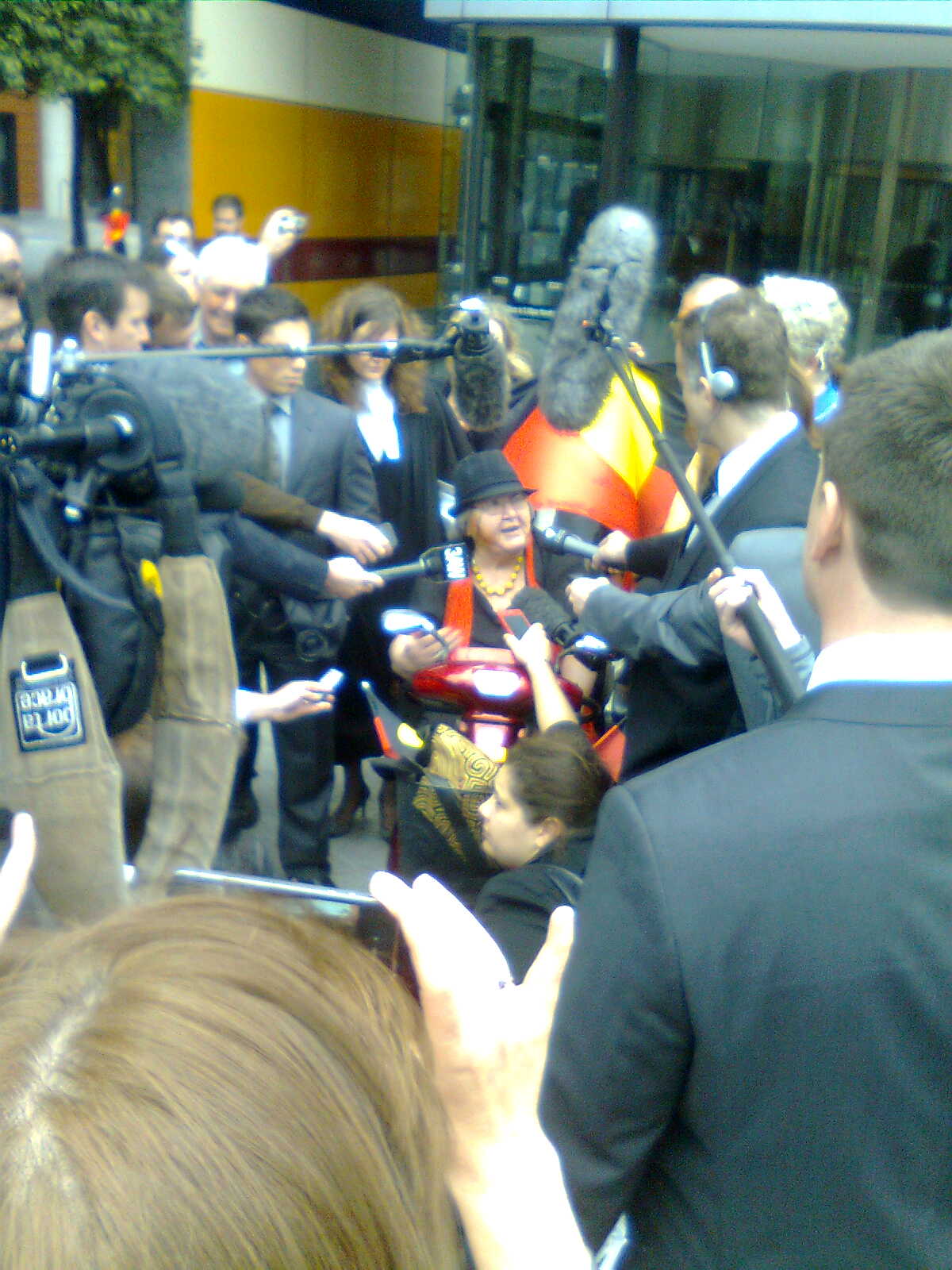 Image taken on my Nokia mobile phone camera of Aunty Pat Eatock emerging outside of the Federal Court on William street, Melbourne after winning the case, surrounded by media. Photo: Roberta Joy Rich 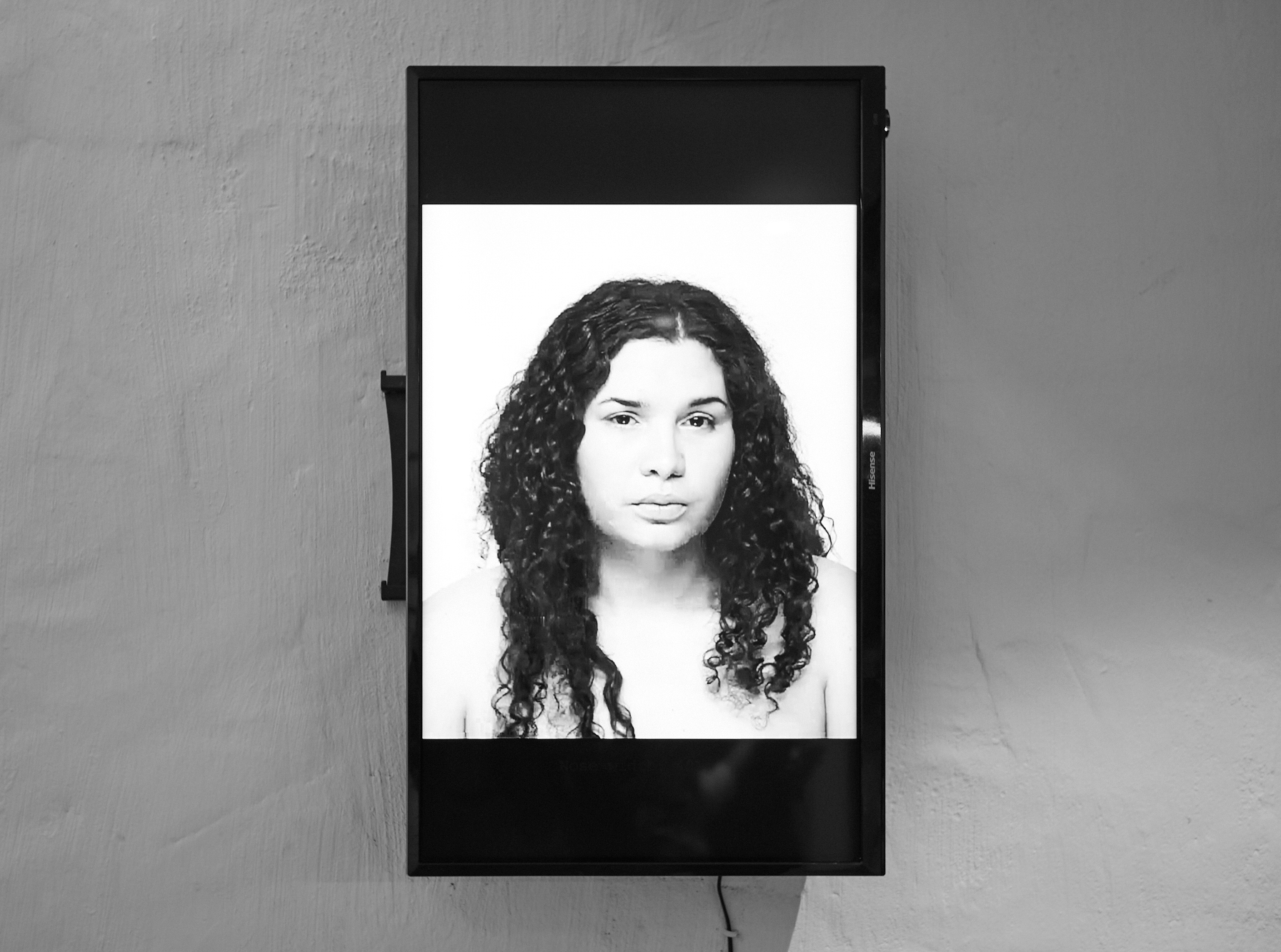 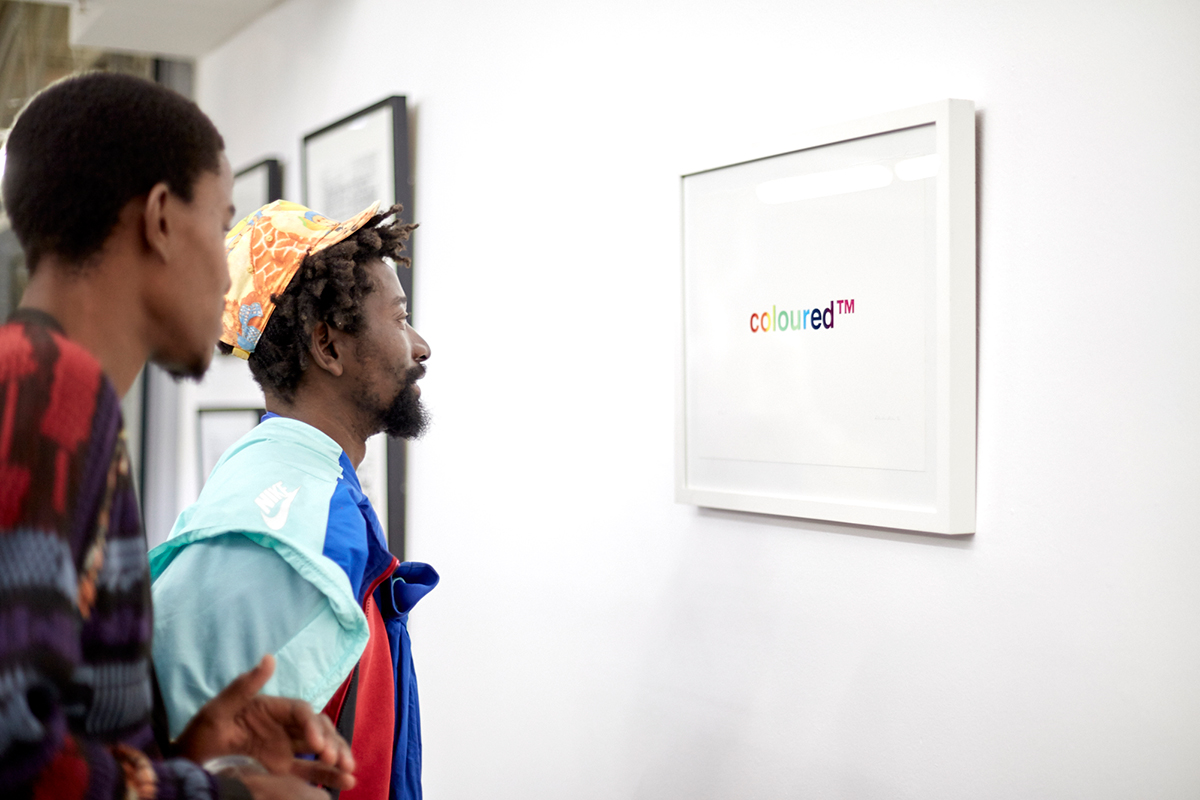 Roberta Rich, installation view of Coloured™, 2016. Serigraph on paper, edition varies. Photo by Zelé Angelides. Two men of African ethnicity stand close to one another, looking at the hanging Coloured™a print with the words ‘Coloured™’ printed in rainbow hues on paper, with a white frame, hanging on a white gallery wall. 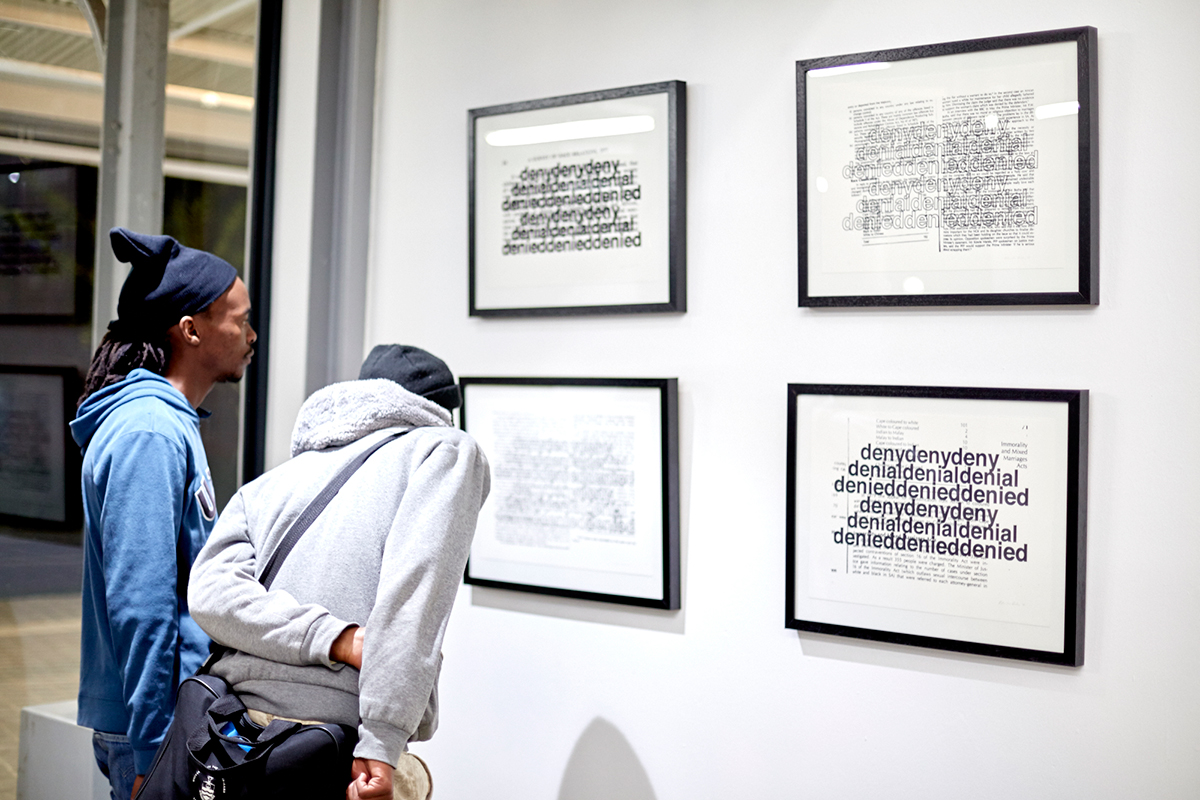 Roberta Rich, installation view from left clockwise It was a generally accepted fact, 192 Denials in ‘78, Amendment Denial Act and 152 Denials in ‘79, 2016. Serigraphs on paper. Photo by Zelé Angelides. Two men of African ethnicity, one standing, another leaning to look at the four serigraph prints hanging on the wall, two side by side and two below. The prints have a black frame and show black ink of text abstracts and the words deny, denial, denied repeated on each print.

Roberta Rich is a multi-disciplinary artist whose work responds to constructions of identity, often referencing her diaspora African identity and experiences. Utilising language and satire in her video, performance, installation and mixed-media projects, Rich draws from historical, socio-political, media and popular culture to question notions of ‘authenticity’ and challenge problematic representations of identity.

Since completing her Master of Fine Arts at Monash University, Rich has curated projects in Melbourne, completed a studio residency in Johannesburg and exhibited her work within Melbourne, Adelaide, Sydney and Johannesburg. —

Deny / Denial / Denied is a collection of new work produced during a studio residency at Assemblage, in Johannesburg, South Africa. Comprising of serigraph prints, screen-printing on found material, and video works, the exhibition considers and explores notions of denial and being denied, particularly within a South African “Coloured” context both pre and post Apartheid. The exhibition reflects upon historical practices of Apartheid South Africa – its methodologies of classification, the people of District Six (and forced removals), as well as my personal relationship to these histories.

‘Drawing often from experiences of “identity cross examination” as a primary source of research, I employ Afrikaans, colonial language and terms such as Coloured, appropriated as Coloured™ in my work as a platform for discussing the complexities of African identity.

These practices for me, act as a navigation tool through a complex field of rejection and reclamation of language, to find and ascertain empowering forms of self-determination and positive representation of African identity’.

Roberta Rich’s Assemblage Residency was supported by the Australia Council for the Arts ArtStart program and by the Sainsbury Sculpture Grant, established in memory of the late Madeline Olive Taylor through her estate and administered by the National Association for the Visual Arts (NAVA).

‘Connection/Reconnection’ is an exhibition that explores visual and linguistic ties to the experiences of Indigeneity within the context of Australasia. Maintaining a strong sense of Identity can become increasingly difficult whilst away from an ancestral homeland. Further difficulty manifests when language that unites one to their tribe, mob or people erodes when the english language dominates.