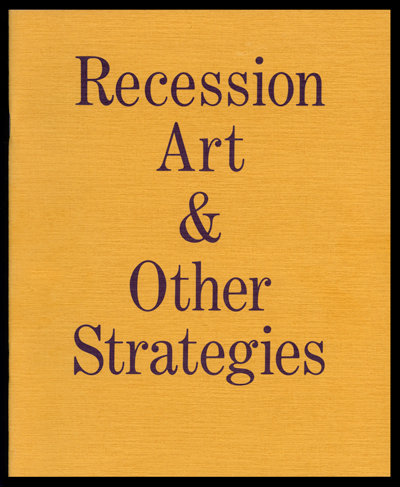 It was situated as part of a suite of IMA exhibitions including “Q Space and Q Space Annexe” and “Know Your Product” staged in 1986.

“Recession Art & Other Strategies” at the Institute of Modern Art, Brisbane, in 1986, curated by artist Peter Cripps. The exhibition considered  “a recurrence of a ‘Recessional based’ art practice in Australia”. “The pressure of little money and a small art market has meant that many artists still own the greater part of their life’s production. The initial difficulty of producing and the subsequent difficulty of disposing of art works is ever present…”.

Touching on Percy Grainger’s ‘Free Music’ machines, to the recent histories of Australian exhibition spaces such Q Space, V Space, IMA, Q Space Annex, n-Space, and printed exhibition spaces such as Blunt Report, Hand Space, Pneumatic Drill, as well as projects such as The Fosterville Institute of Applied and Progressive Cultural Experience and The Anti-Music Collective, this text provides a clear insight into the many productions of these artists and their peers in Australia in the 1980’s, as well as the climate that surrounded their activities.

Q SPACE, as with the earlier V SPACE, derived its meaning from the state in which it operated ― Q standing for Queensland. Works by the following artists and groups were shown at these spaces: Peter Tyndall, Jenny Watson, Imants Tillers, Hilary Boscott, John Davis, Robert MacPherson, John Nixon, John Smith and Anti-Music. This exhibition and catalogue have been compiled from the Q SPACE archives. Where possible we have attempted to maintain the original method and feeling of this documentation.”

The Catalogue includes texts by Peter Cripps and John Nixon, as well as an interview between the two artists, alongside exhibition photography of each show by John Nixon and Robert MacPherson, and an exhibition history.

In 2014 Peter Anderson wrote about the “Know Your Product/No Your Product” [sic] exhibition during a Siganto Fellowships at SLQ;

” Back in 1986 I wrote an essay for the catalogue that accompanied the exhibition “Know Your Product”, curated by Ross Harley for the Institute of Modern Art (September 11-27, 1986).

The exhibition, which focused on the complicated overlaps between music, art and other cultural practices, was an early attempt to make sense of what had been going on in Brisbane ‘youth culture’ in the late 70s and early 80s. It was an exhibition that was full of posters, flyers, single covers and cassette tapes. There was a party to kick it off, a concert, a super8 film screening and even a suite of 10 radio programs about the local music scene produced and presented on 4ZZZ. In amongst all this colour and movement my essay was perhaps a little dry, even a bit academic. Titled “Lists of Ordinary Things: The Materialisation of Memory” it was perhaps a little too focused on the question of how the story might be told, rather than trying to tell it.

At the time, that story had barely slipped out of the present, posters included in the exhibition were probably still clinging bravely to brick walls, and our ears were still ringing from the assault of various punk bands. And here I was banging on about the difference between a ‘good story’ and the archive, about the difference between a narrative and a list. When I did get down to the subject matter of the exhibition I found myself comparing a number of early 4ZZZ Hot Hundred lists, comparing the 1976 list with the latest list from 1985. It was a quick paragraph that attempted to capture the dramatic shift from a list with no local product and The Beach Boys’ “Good Vibrations” at number one, to a list with much more local content – including unreleased ‘demo-tapes’. In less than 10 years everything from the first hot hundred had slipped away, and music seemed to have changed forever…”

The Q Space and Q Annexe space and 1986 retroactive exhibition was an important insight for Brisbane artists working with experimental art making in the 1970s and 1980s. The exhibition was important evidence about the potential of artists’ homes for establishing, organising and documenting artist-run activities, for artist’s archives for retroactive exhibition making, and it included examples of radical sound art being made locally in a climate of precarity and DIY at the time.. This exhibition helped inform other exhibitions curated by then IMA Director and conceptual artist Peter Cripps alongside colleagues as a suite of intersecting exhibitions in 1986. These included ‘Recession Art and Other Strategies’ and ‘Know Your Product/ No Your Product’ curated by Ross Harley.