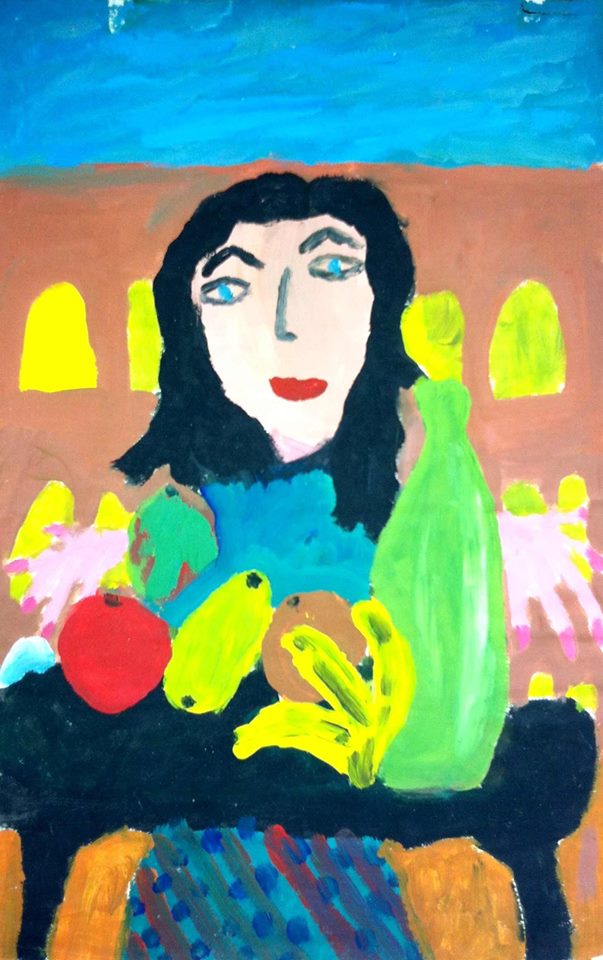 Ross Wallace: Here is a painting I did of my artist teacher Barbara Moriarty when I was age 8

I thought I would give you some info about ‘The Studio’ at St Mary’s Kangaroo Point and The Emu.

I’ve been using some of the artwork I did with Barbara Moriarty in the film ‘Don’t Tell’ which I am currently designing. I first attended one of Barbara’s classes in 1968. It was a school holiday week long event in Sunnybank. I remember making a clay elephant which Barbara loved and said to my mother “Ross is really talented and I’d like to offer him a position in my Saturday morning art classes in which I have a limited amount of children (8 or 10 from memory) attend at St Marys in Kangaroo Point”.

My parents always encouraged me in artistic endeavours and so from 1968 through to the end of 1971 I studied with Barbara, first at St Mary’s and then in 1971 she shifted to her home in Hamilton. She had all sorts of techniques and activities to get us to open our imaginations. She would show us slides and then get us to choose a favourite image and then paint it from memory.

Barbara hated us to draw anything as if it came out of a learn to draw book. If we drew birds they couldn’t be the simplified two strokes which you see in most kitsch painting, they had to be drawn in detail with heads and bodies, beaks and wings. All available space on the page or canvas had to be filled with either colour or or shapes. She wasn’t one for blank spaces.

I’ve have a lot of memories and stories to tell about her, too many for here unfortunately. I loved her very much and she was the first strong female artistic role model in my life. She was beautiful in a 1960s Elizabeth Taylor sort of way. Big silver modernist rings, Kaftans and always a Marlboro with a long ash on it. She had a husky voice, from all the ciggies, but was very cultured and well spoken. She was bohemian and I loved the way she always had cute young hippie boys around to do things for her.

Barbara was probably in her 40s at the time but still a beauty. I then went from her classes to do work with another Barbara. This time it was Barbara Logan who taught every Saturday at the old museum where the Queensland Art Gallery was originally located. I did this for two years 1972 and 1973. We painted in the actual gallery. We rolled out canvas on the floor of the gallery and set up our easels in the midst of the Hans Heysens and the Picasso which they had at the time.

It was a wonderful place to play in. I would run up and down the Romanesque towers with my friend Colin and flick through all of the racks of art kept behind the gallery walls. Somewhere I have pictures of us at the museum. So, having given you a bit of background on my childhood art education, by the time I was at Seven Hills doing fine art in 1979, I was already familiar with artists and studios.

In 1979, it was Georgina who found the space in Woolloongabba Five Ways, as it was called back then, ironically it had been the premises of my family dentist which I had been going to from the early 60s. It always smelled of cloves and the corner room always reminded me of dental drills. Having my teeth needlessly bored and filled with amalgam whilst watching the steam trains cross the five way intersection with a man ringing a bell and walking ahead of the train across the intersection.

There were rows of Dickensian sheds around the rail yards with old second hand timber yards and mechanical shops of all sorts as well as the Gabba Cricket Grounds which at the time were old tin roofed sheds. The Queen appeared here in 1970 and as school children we all went to wave at her as she drove around the Gabba oval. 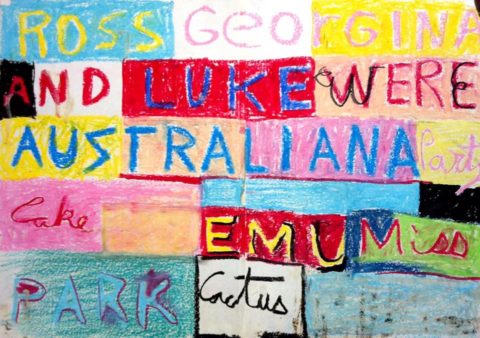 The place had history, childhood memories, good and bad. When we took over the place at the cost of $12.00 a week we thought we had a bargain and a playhouse in a mad, sort of, wrong-side-of-the-tracks part of town. It was also the Punk era and this made it a perfect place for our subversive anti establishment, anti-Joh group to meet.

Georgina asked Luke and I to be in on the whole thing. It was all her idea. Always the producer, she organised us boys into doing all sorts of things. So, Luke had his retro shop in the Brisbane Arcade, Georgina had left art school and was doing a typing course and working at a legal firm during the day and hanging out with the likes of Dragan Illic at the IMA and I was a student at the College of Art Seven Hills.

Luke has his version of the name of the studio, and his information is correct, he did have a connection to an Emu Park which was close to Alpha, where he came from BUT, that is not why the studio was called The Emu. We were all fans of John Waters ‘Pink Flamingos’ and Jenny Kee and Linda Jackson’s ‘Flamingo Park Frock Salon’ in Sydney.

Sydney played an important part of our psyches at the time. As Luke has commented in his STRANDED memoir recently, we all wanted to leave Brisbane and as Logan Road turned into the Pacific Highway which led to Sydney, at 1 Logan Road, the Emu was at one end of the yellow brick road and the Emerald City of Sydney was at the other.

Georgina and I would hang out of the windows, smoking our cigarettes and dreaming of our future life in Sydney. I would paint pink flamingos all of the time. I was obsessed with flamingos and one night, I am ashamed to say, along with art school friend Scott McCaul, I stole one, out of a garden in Norman Park and struggled to get it into my Hillman Hunter. It was much heavier than I had anticipated.

We drove it to the studio in Woolloongabba at about 11 pm and struggled to get it up the many steps to the first floor. Once inside we realised it wasn’t flamingo but an emu. So, one day when coming up with names for the place we decided to call it ‘Emu Park’ in reference to ‘Flamingo Park Frock Salon”.

Georgina suggested the name ‘Chartreuse Emu’ which I believe may have originated with Luke. He has a history with that name however, It was mostly called ‘The Emu’ and my car, the beige Hillman Hunter was called ‘The Emu-mobile’. My fantasy was that we were degenerate punk criminals in the style of Batman baddies and the Emu was our hideout.

I did a series of cartoons illustrating our John Waters’ ‘Female Trouble’ crimes of passion all centred around Woolloongabba which we pronounced Voolloon-gabaaaaaah. Sounded more exotic in a 1930s Berlin existentialist sort of way. Speaking of Berlin, Natalia Von Helm aka Mark Heath was a regular at The Emu and co conspirator in the subversive-punk-criminal-alter-ego-fantasy-cartoons.

I can’t remember Luke using the place very often. He always made a big entrance for the parties we threw, you’ve seen my invitations; these were drawn by me and photocopied by Georgina at the law firm/ then ad agency she worked at during the day and I think he went there sometimes through the day, usually to drag some cute piece of trade in to “pose” for him I expect as I would notice evidence of a drawing session. I still have some of his Emu life drawings of muscular young men.

Luke will have his version of events of course but hey? That’s what I remember.

For me it was really Georgina’s and my cubby house. We weren’t allowed to live there but we loved there if you know what I mean? We were often raided by the police, because we had coloured lights in the studio and the constabulary thought we were running a brothel. The police would bang the door down on Ipswich Road and when they saw two teenagers with multi-coloured hair and plastic clothes they were quite confused and would ask where our parents were, Georgina was 17 and I was 18.

I did a lot of work there and staged an installation project as one of my curricular activities for college. Artist Scott McCaul/Redford was joined at my hip at the time but didn’t hang around there much. He always lured me to the Gold Coast for adventures at the Bennalong lounge at the Miami Pub and shenanigans in the sand dunes. It was Georgina and I who made best use of the space and organised the parties which were art installation events in themselves. Luke provided a great guest list and would arrive in fabulous themed costumes.

My favourite was the cake judging party. We lined the place in black plastic and asked everyone to bring along a lurid coloured cake. I then performed a goose stepping rendition of ‘Spring Time For Hitler’ from the film ‘The Producers’ and kicked all the cakes off the table save for the winner.

There was multi-coloured icing and sponge embedded into the floor and walls and ceiling until the day we moved out. Georgina did some beautiful blue ink drawings in the corner room which was the tooth pulling room in the dentist days, sadly these drawing have been lost but, inspired by and somewhat jealous of her drawings I did a version similar, I’ll hunt around for them and scan them and post them to you because they captured the view into the 5 ways at the time.

I played the David Bowie album ‘David Live’ and the B52s album along with Xray Spex constantly at full volume on a pink picnic portable record player I had at the time. The place was furnished with objects we found on the street and things I dragged from my parent’s home. There was a diamond shaped mirror which I kept for many years after we had moved out. It had been part of the dentist waiting room.

When paying the rent downstairs in the National bank one time, Georgina and I dressed as bank robbers armed with toy ray guns from Kmart. That caper went down like a lead balloon and we almost lost the lease. I can’t believe we did that actually. Imagine doing that now? Times have changed. One day when I have more time I will write about all of the events which happened there but this is just the beginning. I hope you will find this of some use and interest Paul.

And here is a selection of images from my EMU archives, drawing I did, an assemblage and invites we made for installations including a photo of the building we rented at 1 Logan Road, Woolloongabba 1979- 1980.

I worked on video clips for Brisbane bands and my first gig was working on a music clip for The Riptides.

This video was made to celebrate the Sydney Nightclub Stranded. The images span fifteen years. The opening images were shot at the Emu an artist-run space above the National Bank 1 Logan Road, Woolloongabba, Brisbane 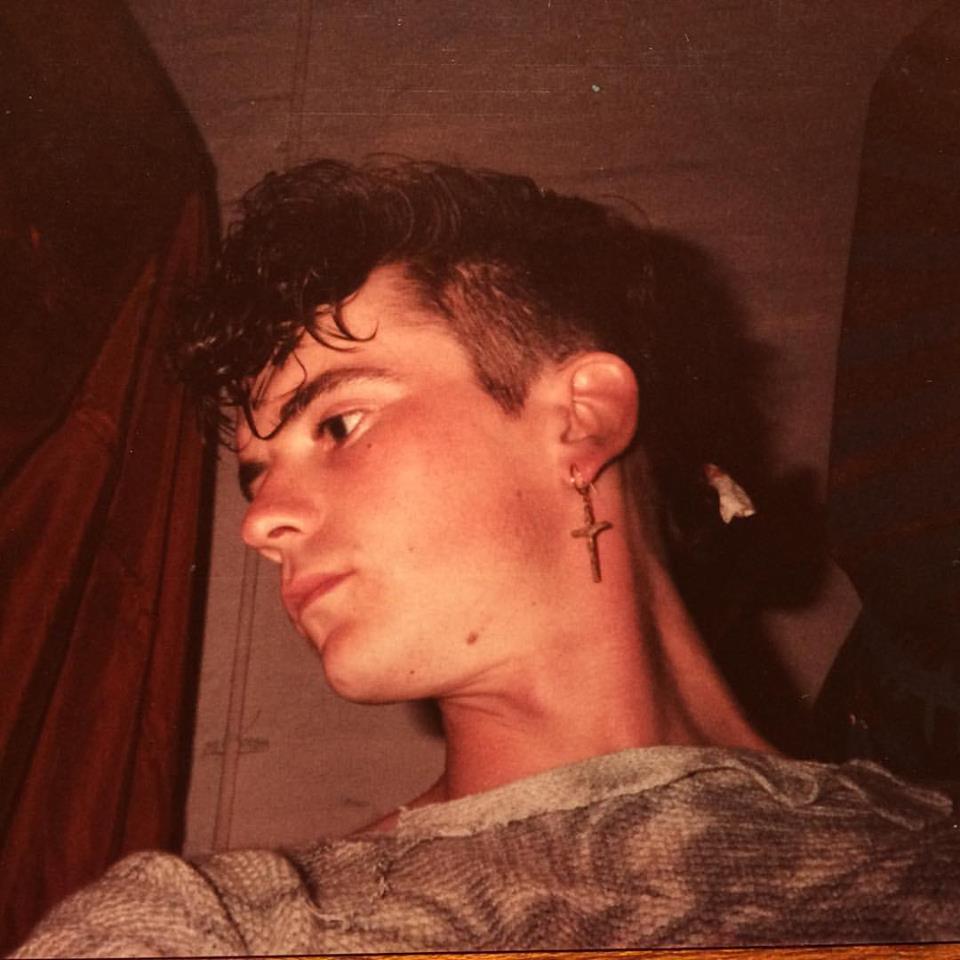