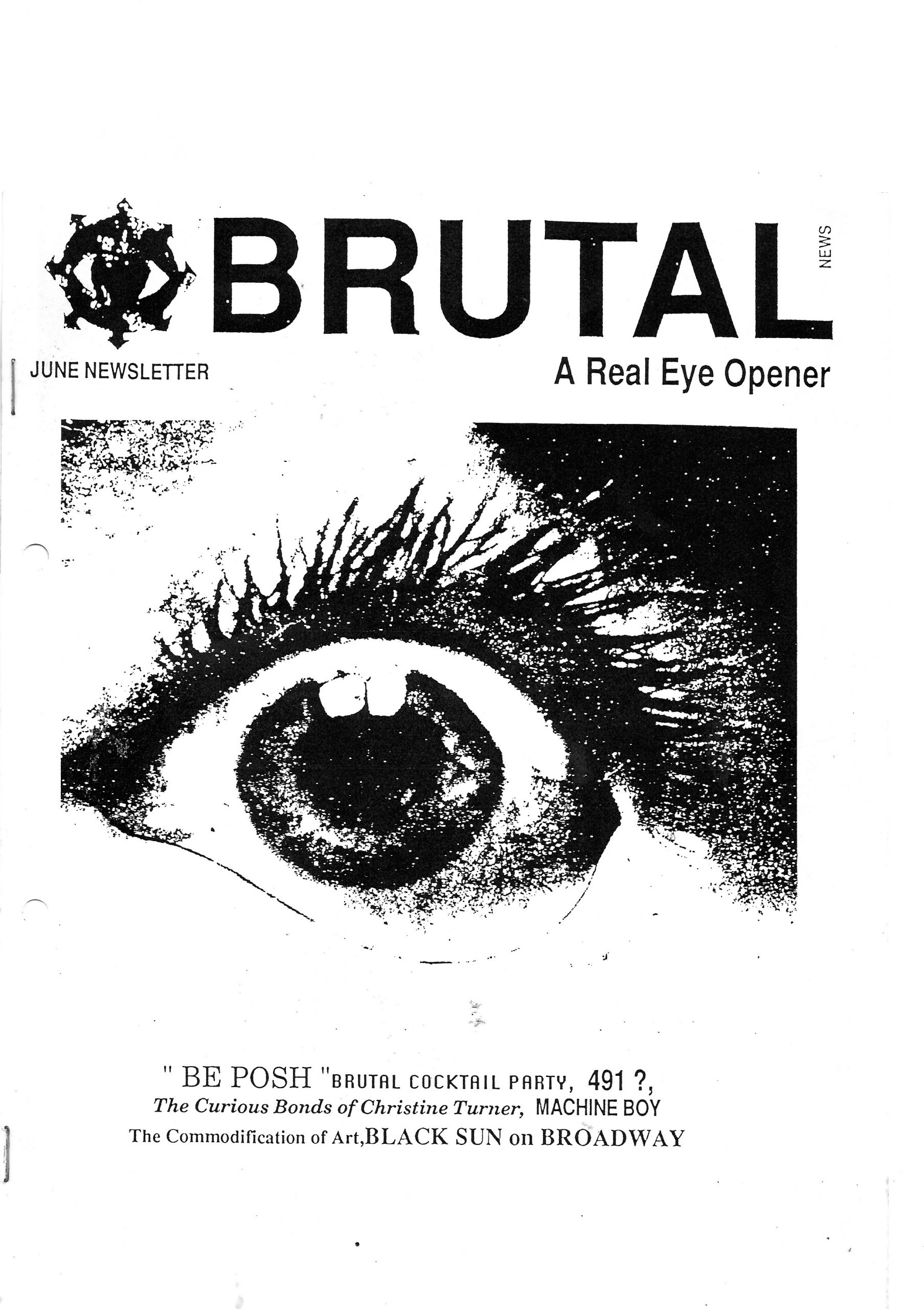 I’ve just gone through my box of old slides etc and unfortunately I don’t have any documentation from Brutal. I know that David Stafford had slides of everything that we ever showed at Brutal as well as copies of all our ephemera. You could try contacting him at his po box address. I’ll send you the details. I do know that we sent the state library every issue of Brutal News so I hope they’re buried in their archive still.

So what can I say about Brutal ARI. Well, when QCA was over for us, after three years of study and work, we were both incredibly motivated to start up a space where we could show emerging and untrained artists.

For some while I had been doing voluntary work at Bellas Gallery then located at the end of Adelaide Street – a commercial gallery focusing on contemporary art run by director Peter Bellas and Gallery Assistant Geraldine Tyson and I was working for an underground magazine called Dare, but I was more committed to my own project.

It took only a few days of serious looking for a space to stumble across 21 Gipps St. The space had been a Chinese illegal gambling den in the preceding years and the shady real estate agent who showed us the space was married to an artist and loved the idea that it would become a gallery. In fact, I recall now that during the whole time 1989- 1991 when we rented the space he was very forgiving with late rent and never pressured us.

We took on the whole floor of the building with the plan to live in the back section and turn the three rooms out front into the galleries. David’s family was instrumental in getting the galleries up to standard, I don’t think we could’ve pulled it off without them.

Thus began almost the years of our Brutal ARI, one of the many early exhibiting artists, Zane (I forget his last name ) was also a sign writer and turned up with an immaculate, massive sign simply saying Galerie Brutal, that we illegally installed on the outside of the building.

People seemed to show up exactly when we needed them, I guess word got around that a couple of weirdos were pushing the boundaries in the Valley and were up for anything. People lived on every floor of the Gipps Street building.

The Livid Festival twosome were on the very top floor and I became involved with curating the art for the festivals in Brisbane and Sydney.Peter Walsh and Natalie Jeremijenko were passionate about the Livid Festival including both art and music programs in 1989 and since.

We lived in the building for about a year and a half then rented the space as studios. We had painters and designers including the fabulous late Mark Wilson who created under the label Hairy Dog. We felt that the studios were a compliment to the gallery and generated a steady flow of visitors. We also held events and parties, dabbling in underground dance parties which again we held illegally in hijacked spaces with DJ Johnny Griffin playing on occasion.

We just followed our instincts, somehow it worked, probably because we were so determined and frankly nobody ever told us no. I don’t really remember many of the artists names except for Carl Breitkruze, Saul Edmonds, Lee McClymont, Matt Dabrowski, Natalie Jeremijenko, Christine Turner, Feral Transmissions, Steven Alderton, John Waller, Ken Unsworth, Rod Butner, Katarina Vesterberg and many more.

We folded Brutal ARI up in 1992, handing the space over to Rod Butner et el (ISN’t ari) and moved to Sydney. I believe that David Stafford who left for Sydney and worked at MCA for a number of years following the BRUTAL years is still involved in the arts whereas I now work in high end jewelry design and manufacture. 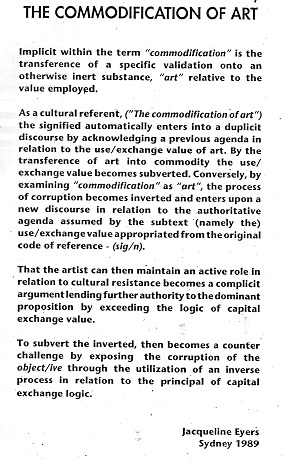 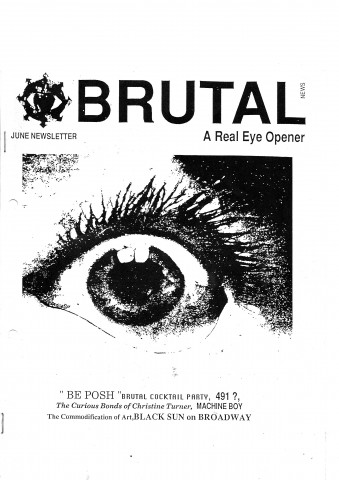 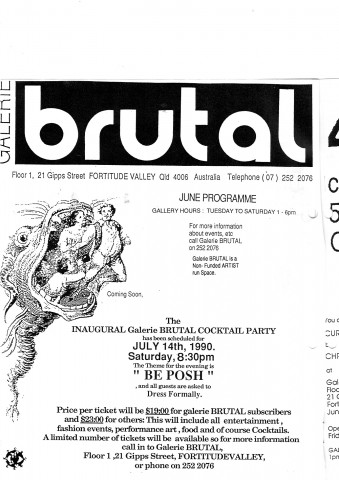 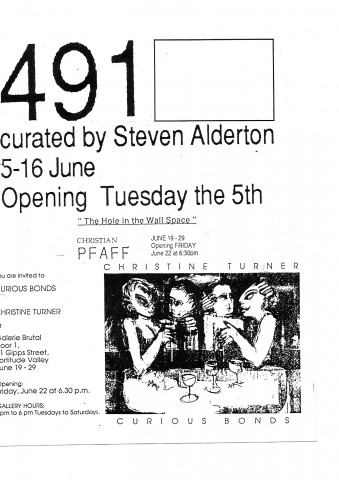 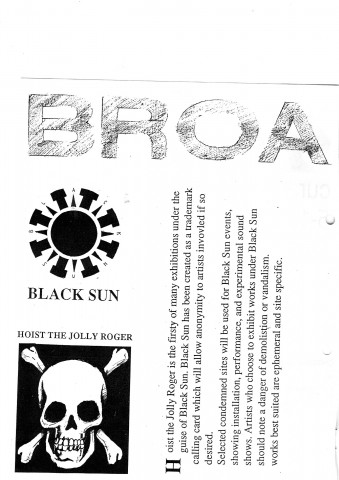 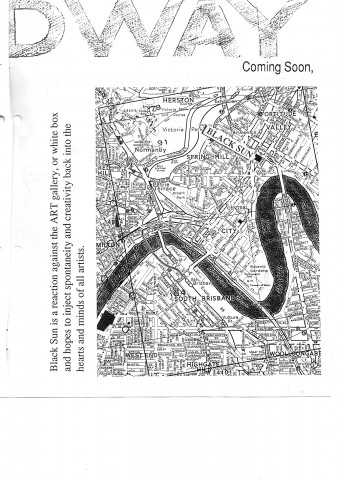 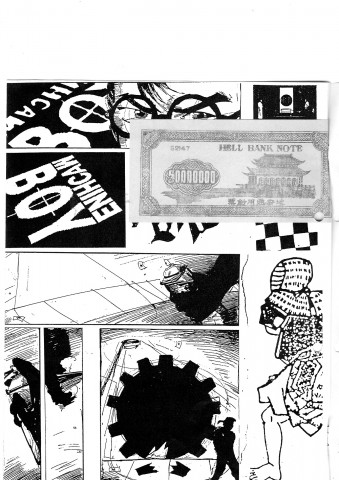 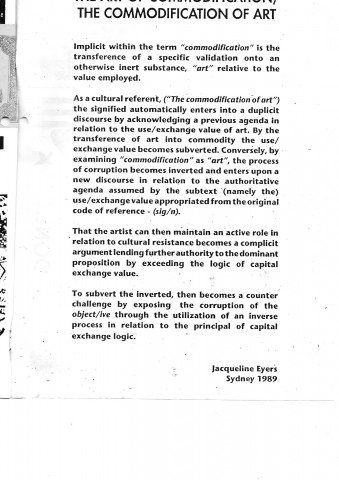 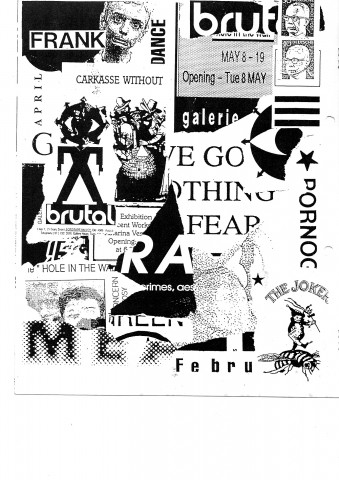 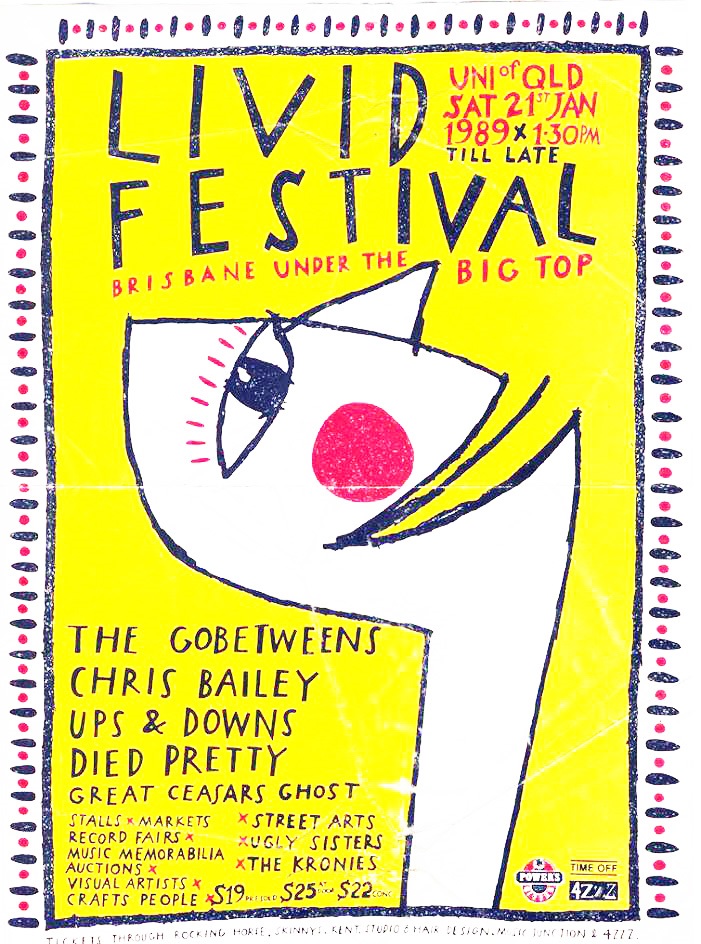 Livid was an Australian alternative rock music festival held annually from 1989 to 2003. Masterminded by Peter Walsh and Natalie Jeremijenko, the original idea of showcasing both the arts (Natalie) and music (Peter) in the one event was standardised as late as October/early November from 1991 until 2003. While it has never been officially cancelled, no festivals have been held since 2003 and neither the organisers or promoters have announced any intention to restart Livid in the future.

Headline artists for the festival’s most recent dates included Linkin Park, The White Stripes and Yeah Yeah Yeahs in 2003, Powderfinger and Oasis in 2002, and Butthole Surfers, Billy Bragg and Ash in 2001.

The festival began in 1989 with a 1500-strong audience at the University of Queensland in Brisbane. Its growing popularity saw it move to Davies Park and later the RNA Showgrounds. Until the establishment of the Homebake festival in 1995, Livid was the only major Australian rock festival apart from the Big Day Out. In 1990, the Livid festival became the first of the recent “touring” festivals when it was held at Harold Park Raceway in Sydney’s Glebe. This event was infamous for the non-appearance of Red Head King Pin, whom (it was said by the promoters) refused to come out of the toilet in his hotel to appear. An ad hoc band consisting of members of The Go-Betweens and other musicians reappeared to attempt to quell the crowd. In 2002, the festival attempted a national move and held events in Sydney and Melbourne. Despite the reasonable success of this move, Livid was now in direct competition with Sydney’s Homebake festival and the nationwide Big Day Out, and citing a “scarcity of headline acts on this year’s international festival touring circuit”, the event’s promoters announced that the show would not he held in 2004. Livid has not been held since, despite initial promises that it would return in 2005.