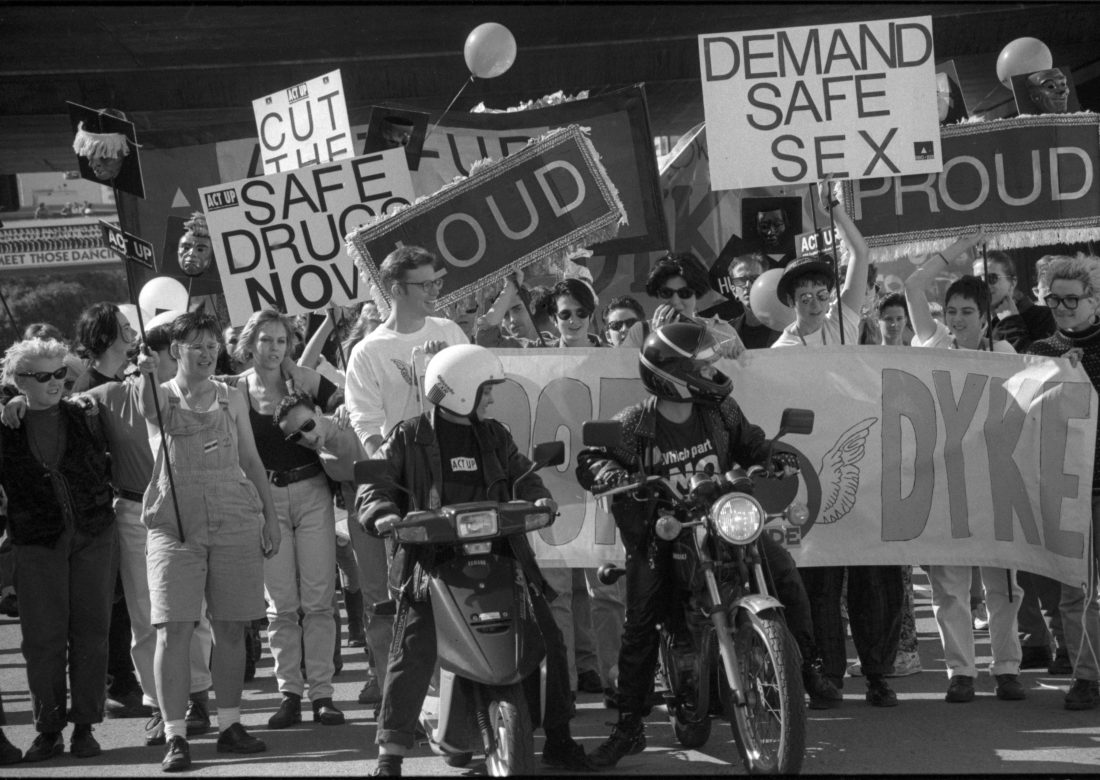 The hand-made placards, are now represented in my photographic archive. A memory of cardboard, paint and slogans in a sloping back garden somewhere in Highgate Hill. Ephemera as evidence.

The tumultuous time of being young, coming out and being about in Brisbane in the late 1980s into the 1990s presents a personal array of re-rememberings – a mix of flashbulb visual memories and more vague mind meanderings that sometimes need collective input and reimagining. As a photographer, I have the visual validations the image captures of LGBTIQ+ community events during these times: protests; festivals; parties; exhibitions and gatherings – the memories they ignite revisited with ongoing interpretation.

Our shared memories of these times of defiance/activism/visibility are important and significant – these threads keep us connected. So often our LGBTIQ+ stories and histories have been under-documented and unrepresented. Historically neglected by mainstream archives and cultural institutions our queer stories are often held by communities for fear of being lost or underacknowledged. Queer history – validated by community, as our mainstream archives play catch up.

Sometimes a nostalgia for the personal and shared experiences of our LGBTIQ+ community activism is highlighted by anniversaries and we can revel or recoil. Most recently, the 30th anniversary of the beginnings of the Brisbane Pride Festival becomes a collective remembering. Those shared moments of resilience and celebration revisited with others…Gai, Geoff, Nina, Cath, Sister Mary Megamouth, Rod, Susa, Carolyn on a zoom of flashbacks and chats – re-encountering versions of interpretation that contribute to the ongoing rich narrative of transformation that we place around these moments.

In Brisbane at the end of the Bjelke-Petersen political stranglehold in 1989 we were well versed in the art of protest having experienced ongoing intimidation and surveillance. Art and activism intersected across our lives. The share houses, art studios, gallery spaces, bars, nightclubs, music festivals…all our points of gathering, our fluid subcultures…

SUSANNAHS AT THE WATERSIDE WORKERS CLUB ON A FRIDAY NIGHT

BREAK THE SILENCE/THE TIME IS NOW CAMPAIGN CRY AT THE 1990 MAY DAY PARADE.

(l) May Day march, 1990. Back of the ute with ‘The Time is Now’ posters and Chantal on the trumpet. Photo: Angela Bailey

There was another protest that year against the Christian ‘Festival of the Light’ as we lined the streets near South Brisbane railway station – in the harsh Queensland sunlight with our placards:

LOVE AND DO WHAT YOU WILL

PROUD TO BE OUT

FAMILIES COME IN ALL SHAPES AND SIZES

THE ONLY SIN IS STUPIDITY

MY MOTHER IS A LESBIAN

Protest against the Christian Fundamentalist organisation ‘Festival of Light’ who led their ‘Rally for the Family’ parade across the Victoria Bridge in 1990. Many of the placards directed at Fred Nile and his ongoing homophobic slurs. Photo: Angela Bailey

In remembering the times of coalition, shared protests and shared silences – the Pride Festival, initiated by community members in 1990, rallied Brisbane’s LGBTIQ folk with a shared celebration of visibility across the city. Operating initially as a collective and involving a myriad of dedicated peeps who scrapped and pushed this event into the Brisbane culture.

Photographs from my personal archives of 1990 – of the first Pride Rally at Roma Street Forum and then March through the city and across the Victoria bridge, show a well-ordered crowd – within the boundaries of one-way traffic directions – a crowd remembering the days of Joh’s enforced State of Emergency powers restricting the right to protest. On to a Fair day in Musgrave Park to share with our community.

The homemade placards of that first PRIDE: 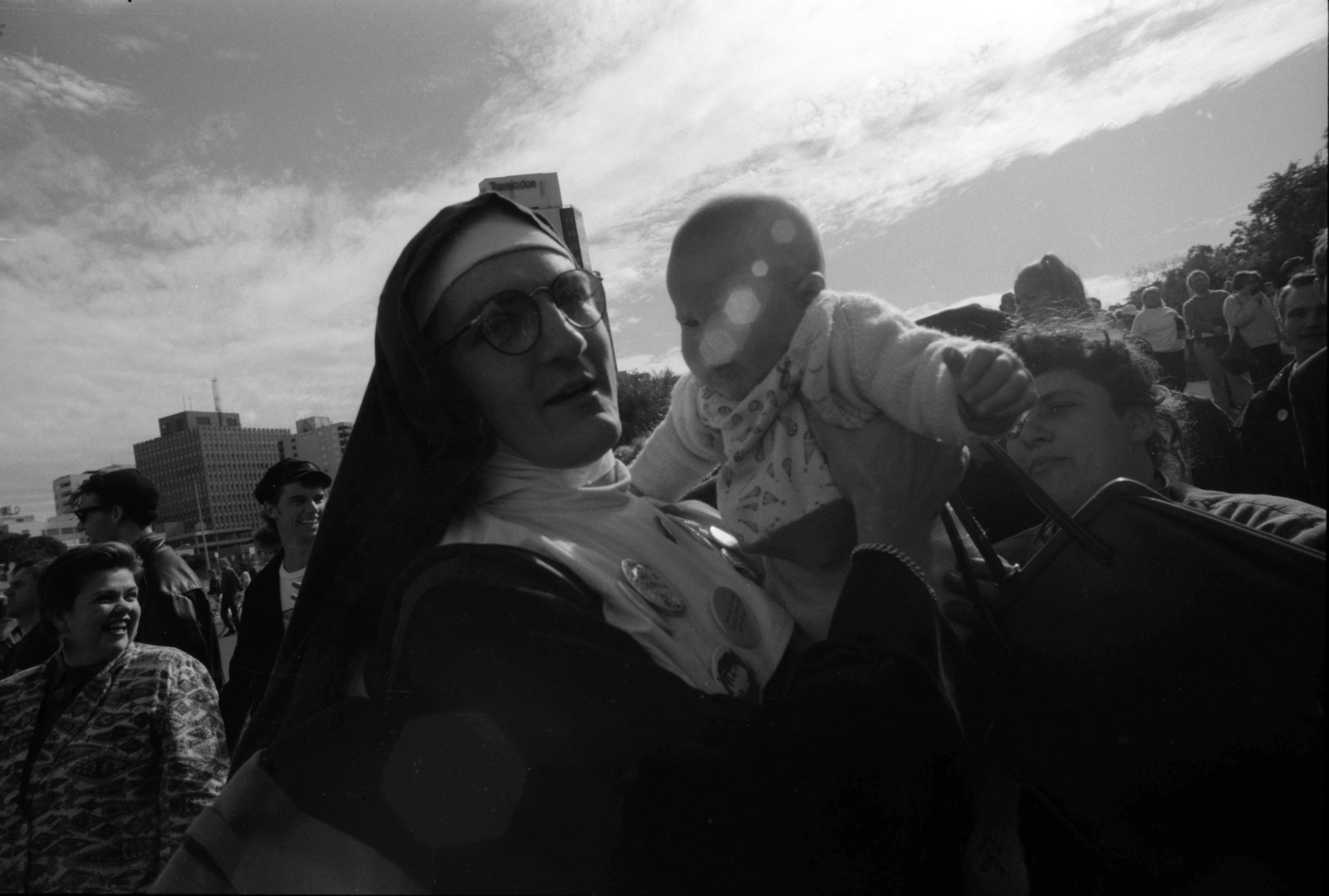 The first Pride Rally at Roma St,1990 Sister Mary Mega Mouth gives a proud blessing to Trudi as Chantal looks on to the right and Pauline smiles to the left. Photo: Angela Bailey 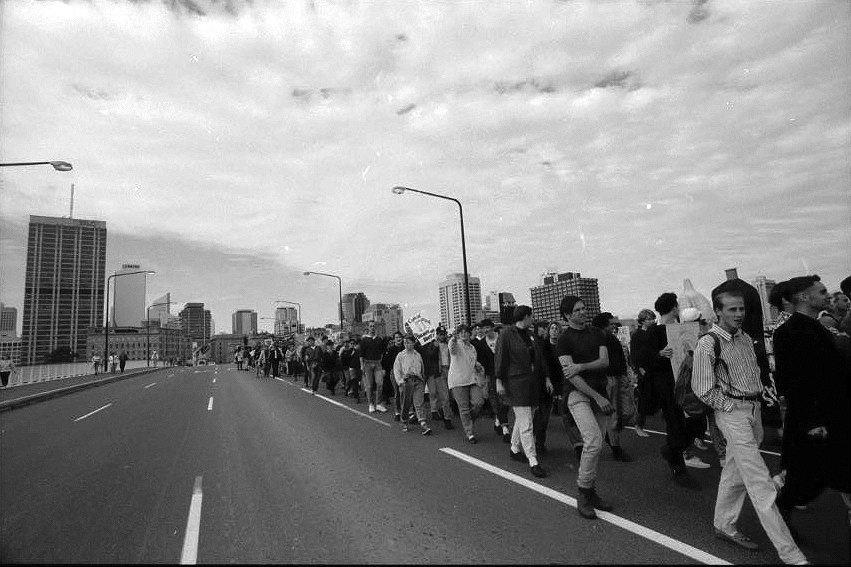 The first Pride March 1990, under the directive of marshalls and the police to ‘keep within the lines!!’as we crossed over Victoria Bridge. Photo: Angela Bailey

Protest against the Christian Fundamentalist organisation ‘Festival of Light’ who led their ‘Rally for the Family’ parade across the Victoria Bridge in 1990. Many of the placards directed at Fred Nile and his ongoing homophobic slurs.

In 1990 the Goss Government initiated the CJC review of the State’s Homosexuality laws –and in October of that year Gay Law Reform was finally passed decriminalising homosexuality. The following year the 1991 Pride march stretched out, louder, a bit more unruly, proud to step out and reclaim …with placards:

COME OUT, JOIN IN, TURN ON 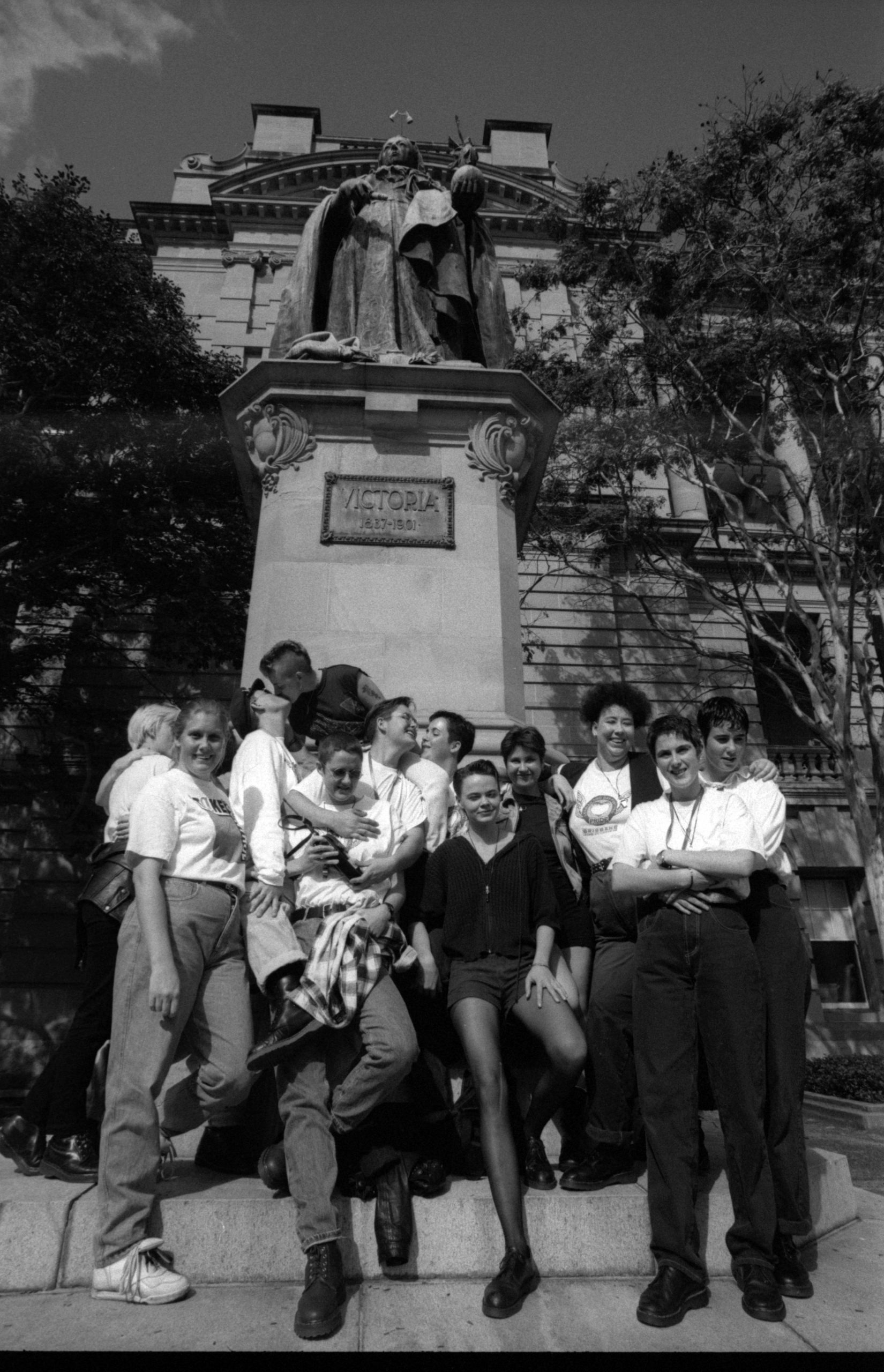 Kiss in Dykes at Queen Victoria statue, 1992 as the finale to our lascivious Kiss In across the CBD as 40+ Queers transversed across the city from Roma Street, through King George Square, the Mall and up and down the escalators of the Myer Centre. Photo: Angela Bailey

In 1992 we performed a ‘Kiss In’ across the Brisbane CBD with the highlight photo being the final destination at the Queen Victoria statue in Treasury Gardens as local lesbians and supporters all cosied up.

Kiss in Dykes at Queen Victoria statue as the finale to our lascivious Kiss In across the CBD – as 40+ Queers transversed across the city from Roma Street, through King George Square, the Mall and up and down the escalators of the Myer Centre.  Pride March 1992. So many faces- Dykes at the front and Jeff x. 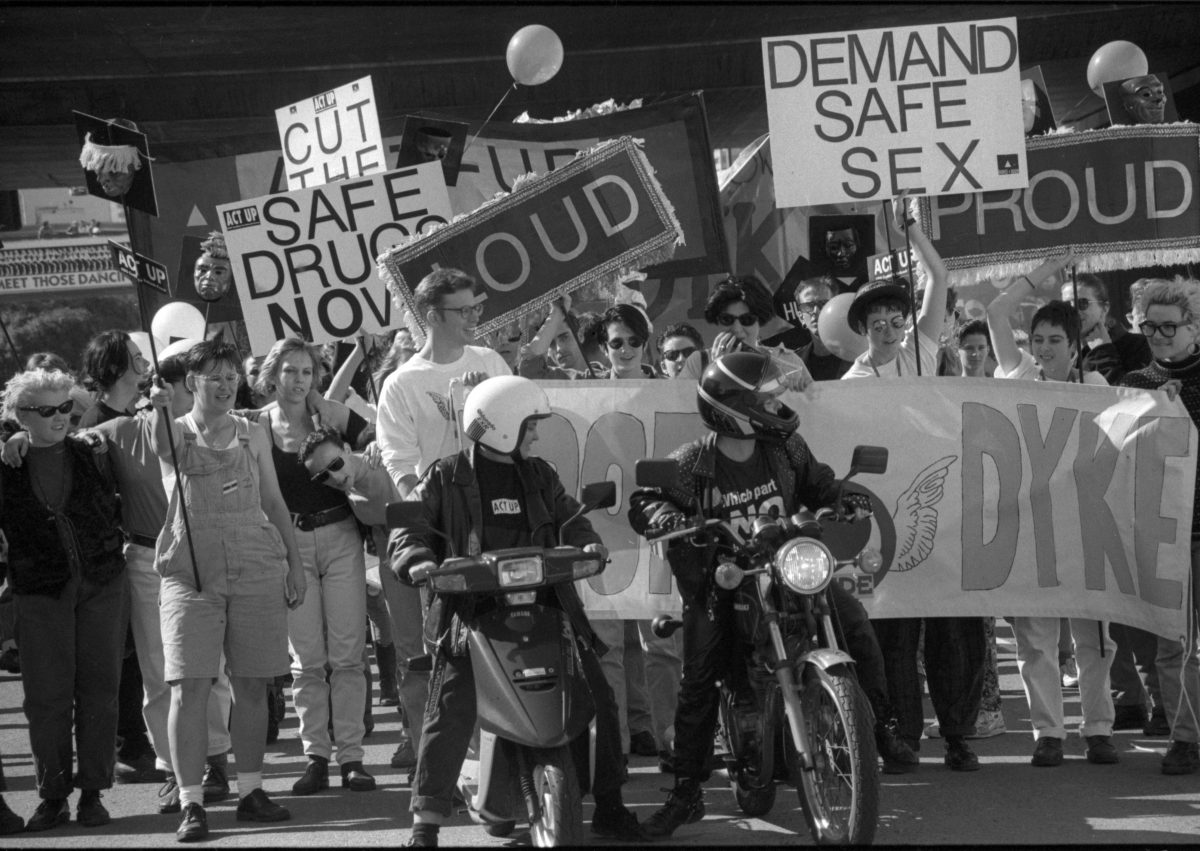 Pride March 1992. So many faces – Dykes at the front and Jeff x Photo: Angela Bailey

A Candlelight Vigil…a community Quilt unfurling and the 1992 Pride Festival a ‘POOF & DYKE’ banner leads the march. We were much louder…we were in King George Square with Brisbane ACT UP with placards of:

ACT UP/ FIGHT BACK

PROUD (WITH GLITTER AND TASSELLS)

DYKES TO WATCH OUT FOR…FUCK THE PATRIARCHY 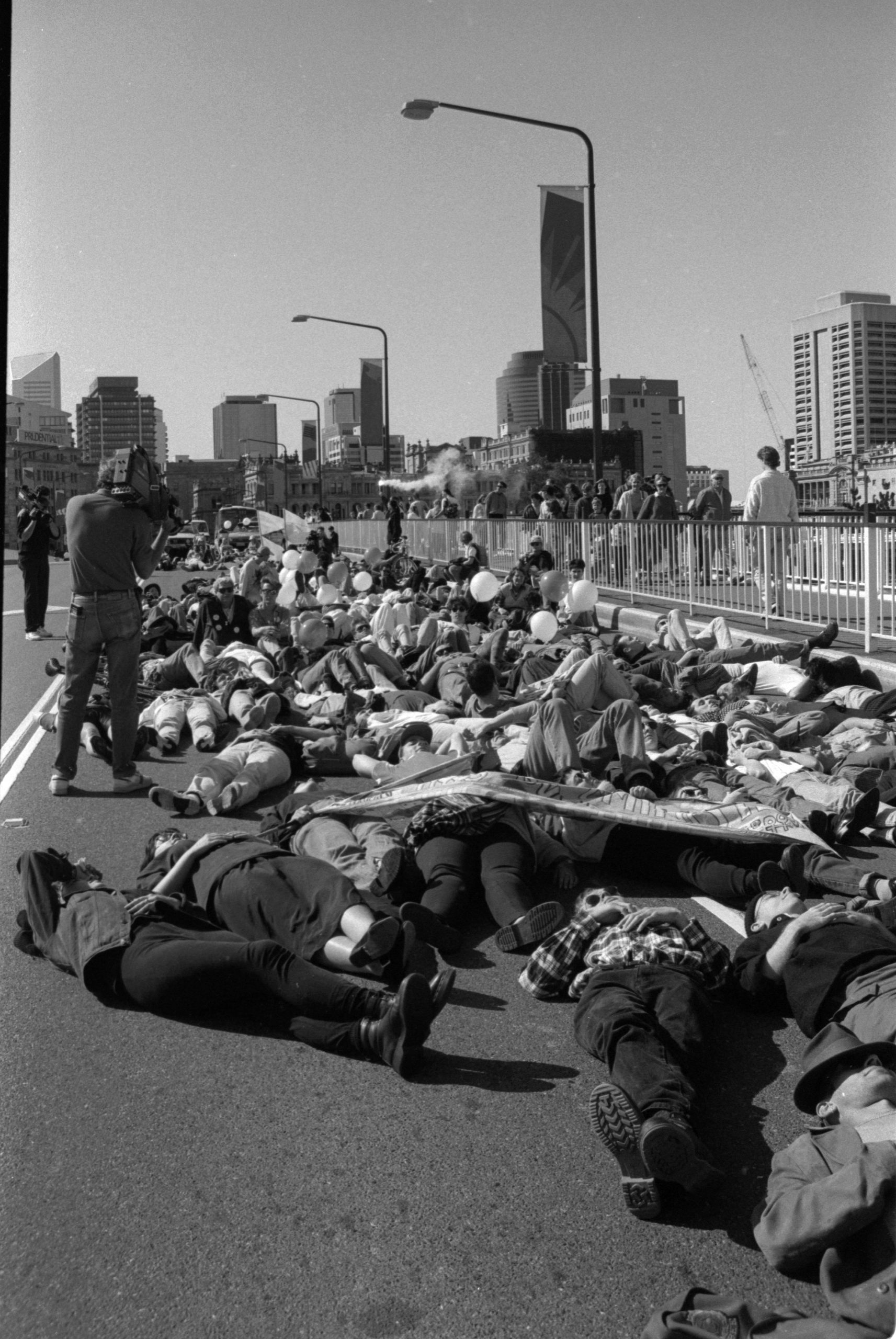 Hundreds of Pride marchers lie down for the ACTUP die in on Victoria Bridge with bright red/pink flare being held demanding action for this emergency…I think for a minute, 1992 Photo: Angela Bailey

Hundreds of Pride marchers lie down for the ACTUP ‘die in’ on Victoria Bridge with bright red/pink flare being held demanding action for this emergency…I think for a minute. The communities were identifying and in the re-remembering quite linear in our gendering.

The hand-made placards, are now represented in my photographic archive. A memory of cardboard, paint and slogans in a sloping back garden somewhere in Highgate Hill. Ephemera as evidence. 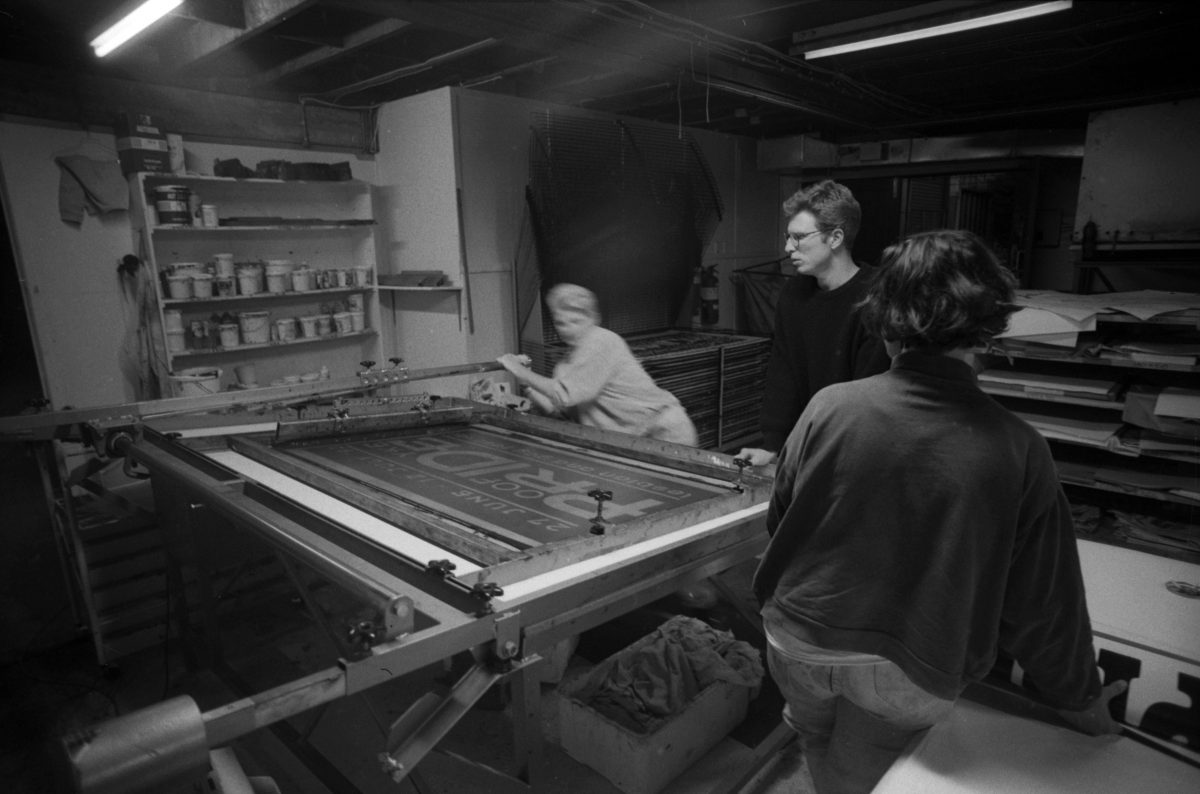 After hours, we screen-printed Pride Posters at Inkahoots studios and when dry would scoot around doing paste-ups…sometimes we’d be followed and posters came ripping down. Which gave even more gravitas to our determination – to be visible and claim some space.

In 1994 a different remembering of a protest at King George Square and inside the Museum of Brisbane gallery in City Hall – a more silent presence with lesbians and supporters. We wore flannelette shirts (reclaiming clothing often used as a derogatory identifier) with gaffer tape – a silent protest …the censorship from exhibition of a poster. The poster – Dam Dykes – made in Brisbane as part of an Inkahoots community political poster project by myself and Susa Blackwell. We were all very proud – it was a time of coalition politics in the gay community – we were inspired to put the issue of visibility and safe sex for lesbians out and about.  The poster caused quite a lot of angst and was deemed too ‘offensive’ by staff to hang in the gallery with the other political posters. Visitors to the gallery could request to view the poster from a folder kept under the front desk. 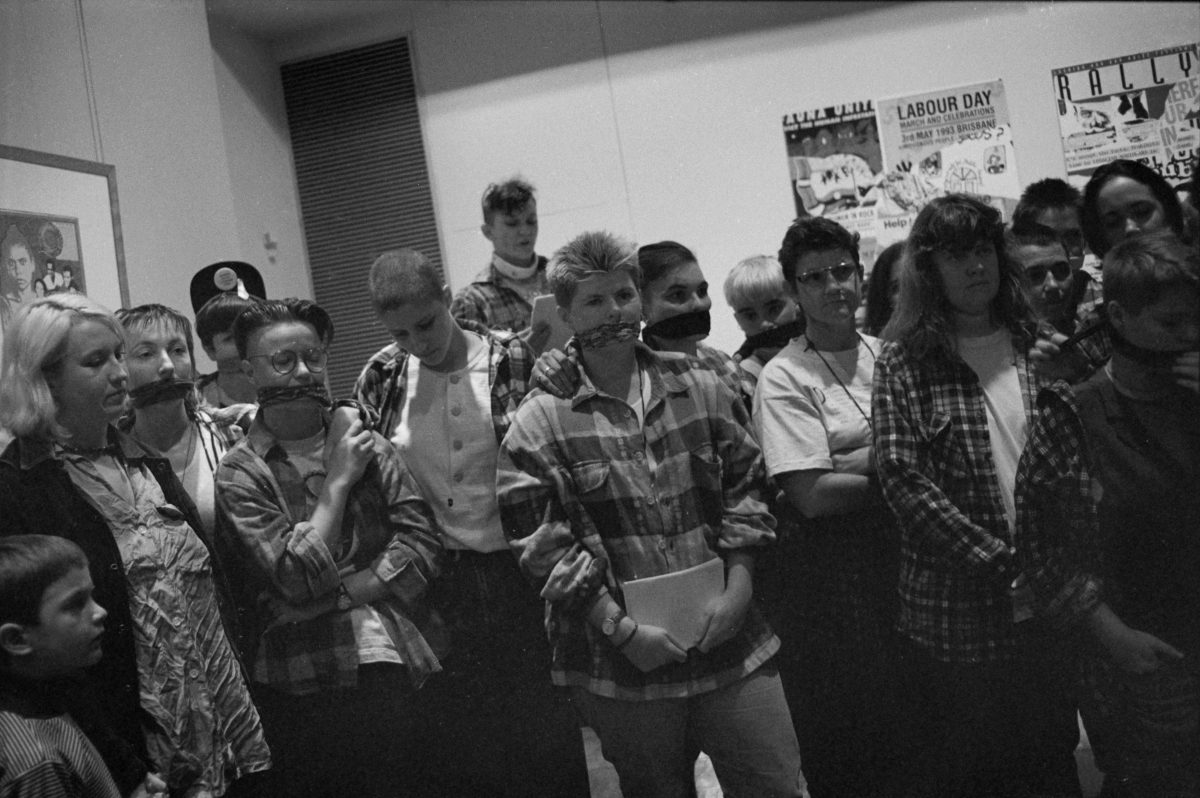 Photographs of the protest inside the City Hall gallery that night, show community in defiance. Someone read a statement…scratchy memories…a ‘manifesto’ of sorts…ephemera lost. Viewing these photos and sharing with others there is a collective nostalgia for our resilience, our community protest activation…and all the small connections of solidarity…not erasure. 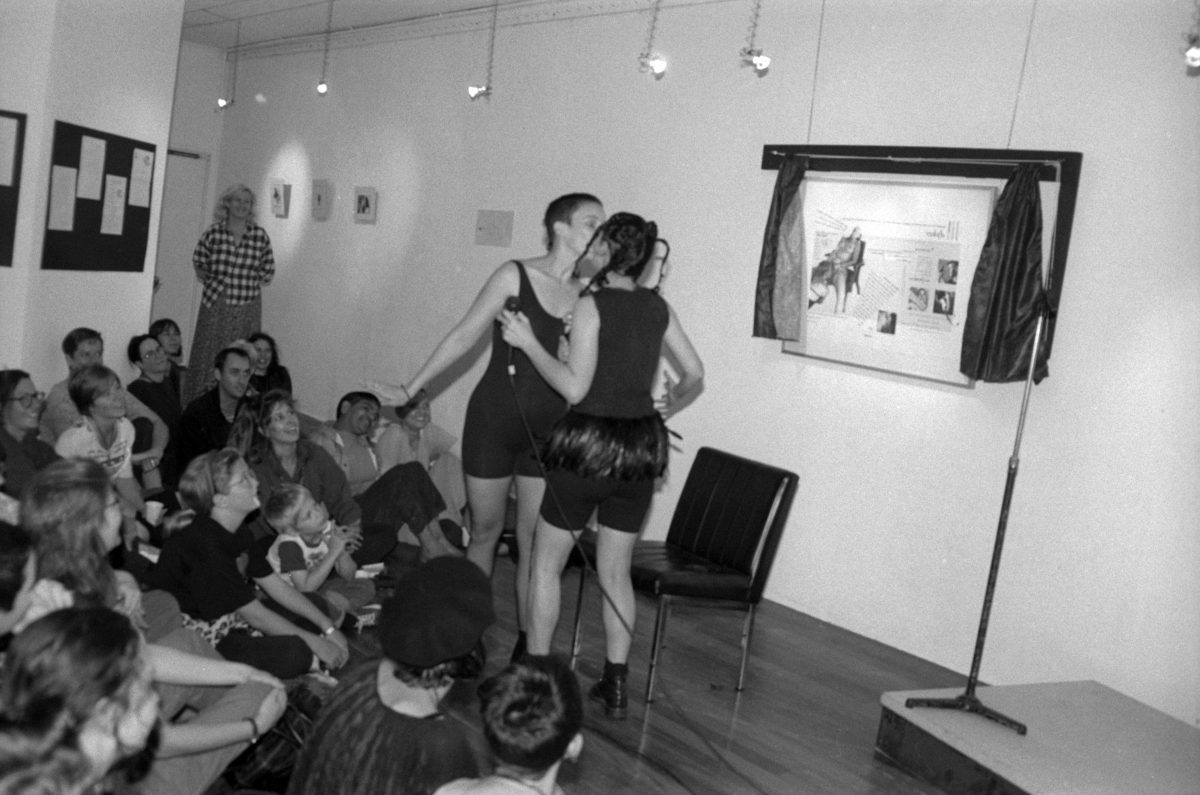 The community later celebrated with an exhibition and opening at a gallery space at the Five Ways Building in the Valley. We ‘revealed’ the poster made at Inkahoots like royalty reveals a plaque.

This memory remembers another – at the Queensland College of Art in the late 1980s – the walk across scratchy dry lawns from Morningside rail station to campus – some art books in the library – a Robert Mapplethorpe – you were only allowed to view while standing at the library desk being monitored/watched by the Librarian. A look back through the Archives at this time and the fear and intimidation rippled through the cultural fabric of Brisbane – the Queensland State Library even shredding Mapplethorpe Books.

My practice is now predominantly as a curator – grounded in activism and still informed from this time in Brisbane. How LGBTIQ+ communities, in all their diversity, are represented, how we represent ourselves and continue to also challenge the spaces and places where we are underrepresented across the institutional cultural landscape. To further the narrative and diverse perspectives of our stories and be part of our shared histories for the future –  resonating in remembering a placard from a Gay Liberation protest in the 1970s – WE WERE HERE-WE ARE HERE-WE HAVE A FUTURE. 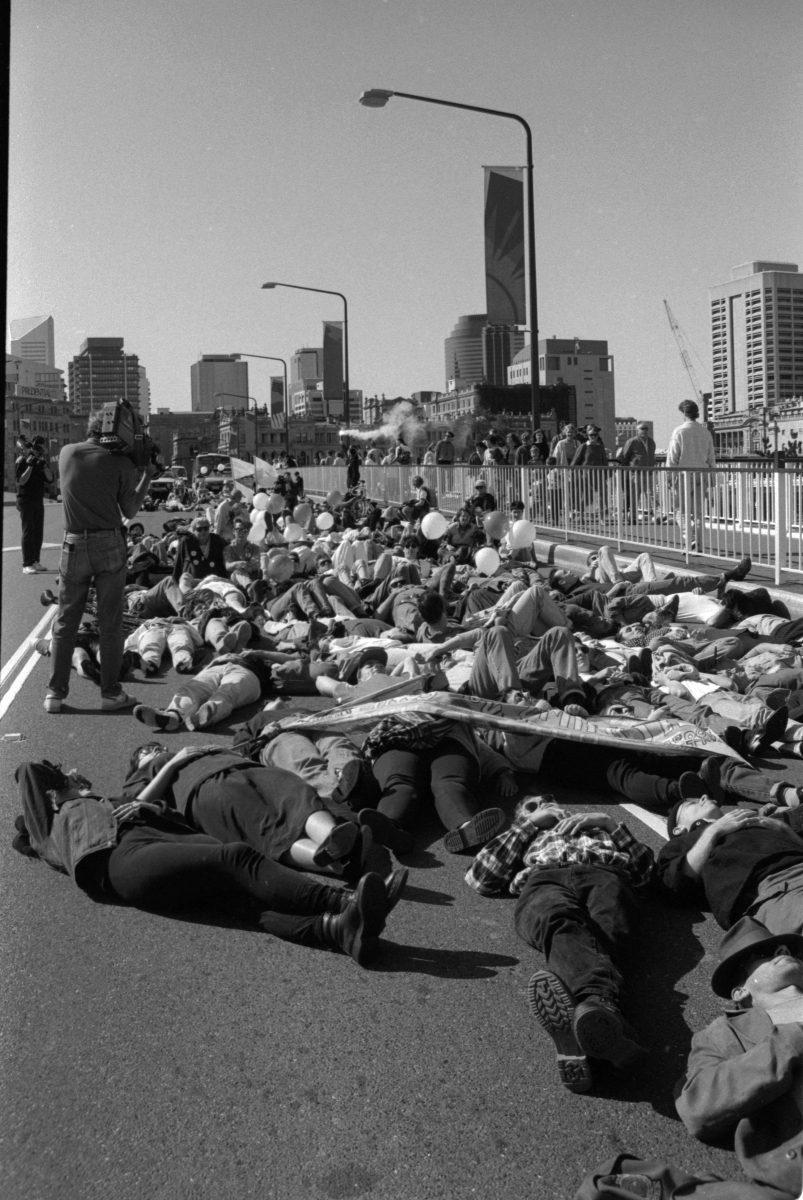 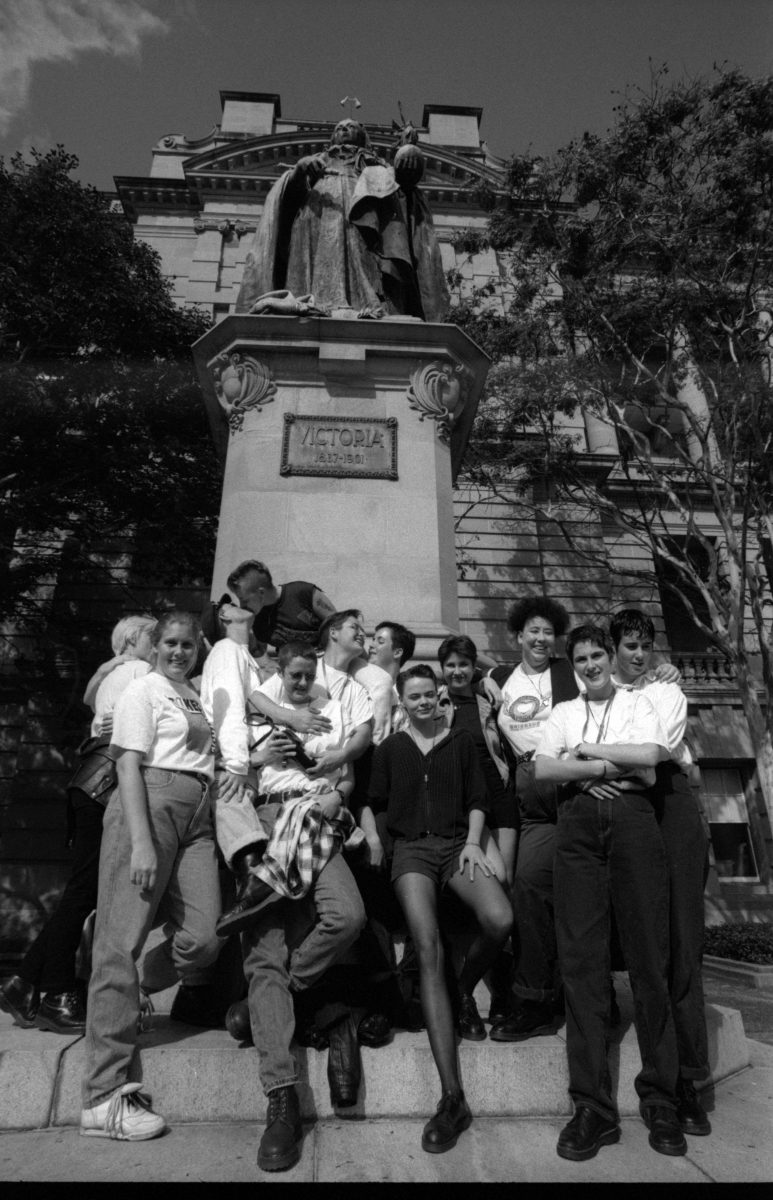 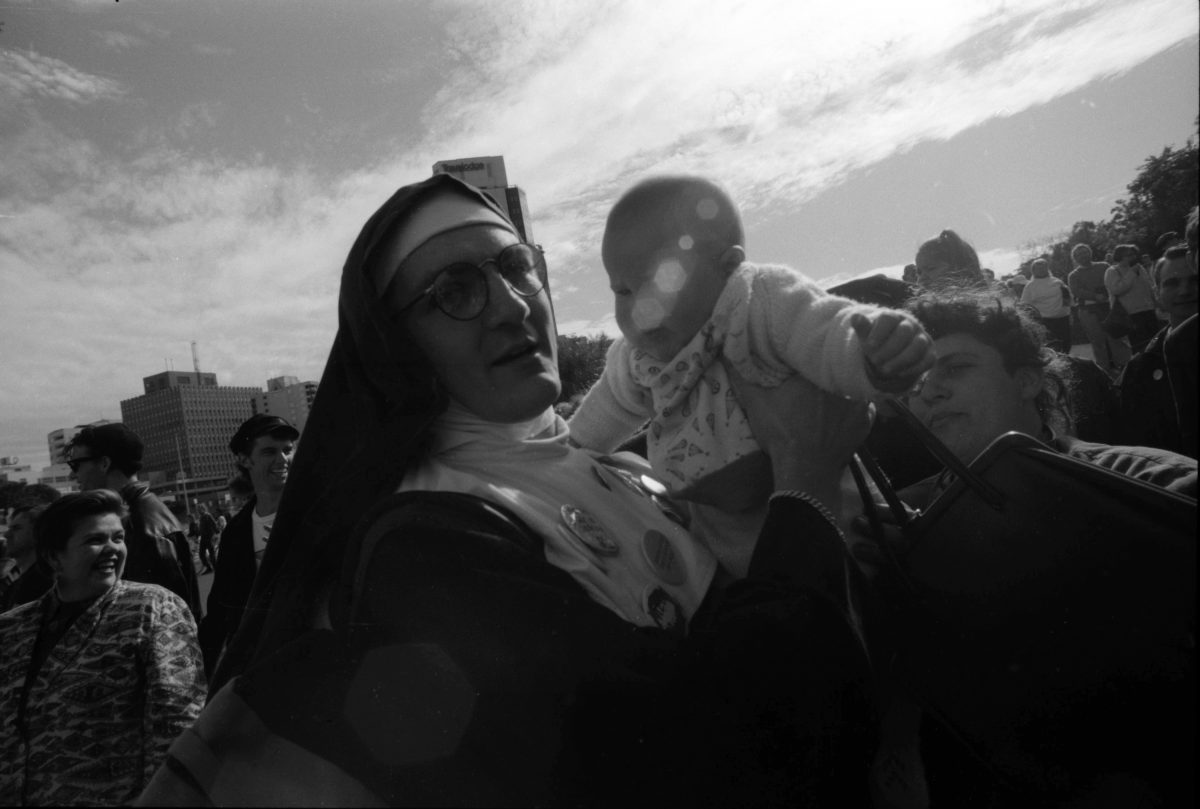