I’d moved to Brisbane in 1985, escaping interstate from a difficult situation that had capped an already spiraling cycle of physical and psychic complaint. And with a life out of control it seems to me now that I came to myself in the office of a Kangaroo Point slip repair yard, a fraught 25 year old embarking on another slim chance artist studio enterprise, I touched base with some associates from Toowoomba days now involved in Street Theatre in West End and through them reset some connections back in the Darling Downs.

Toowoomba – The Darling Downs Institute of Advanced Education – its art department had been a powerful counter-cultural magnet in a conservative farming region. The Art Department contained (did its best) Visual Art, Drama and Music and attracted creative types from throughout the region as well more distant migrants like myself. The sense of Visual Art absorbed in the DDIAE visual art course was of an abstract late modernism, a clear-sighted teaching of a complex aesthetic vision taken first hand by teaching artists who’d come by various routes to this college experiment from cultural scenes in the UK and the USA. In the nineteen eighties this vision collided with the early onset commodification of everything, producing a regional spin off in various forms considered insightful and penetrating of the established order.

George Balajka lived to the north of the city of Toowoomba in a red soil German community that had not entirely recovered from the isolation of wartime farm internment. George had migrated with his wife from what was Czechoslovakia. I myself had arrived in Toowoomba to study in 1980 from the UK. In the mid eighties when I touched base again with George he was living alone in the firm grip of an idea for a church whose sacrament was the marijuana herb, the miraculous powers of which he began testing in earnest. He had a broken leg when I visited him, he told me he’d fallen from the roof of his house, a vision of a pulpit seen hovering while preaching to his flock. Now earthbound he concentrated on written texts of a deeply esoteric nature, spending his time theorizing the finer points of spirit and sacrament for the benefit of the Queensland Department of Health with which he was in an extended application to licence said sacrament.

There was a huge incongruity between the forward thinking College and the rear guard culture into which it was embedded. Music, performance and visual art made a presence in pubs and share house events. The centrally important organization in town was The Dancing Bear collective cafe whose ethos of grunge gothic absurd and leftist folk idealism speaks to me today from a t shirt printed by the collective featuring a shaky Edward Gorey illustration with the legend – a future, unremembered poet of the 17th century accepts a cookie of knowledge from the great veiled bear.

While at college we took in the contemporary art world as a set of driven aesthetic discoveries, out on the streets of Toowomba they appeared as ships in bottles, with recast narratives required, in which roads and drifting music featured and eventual migrations to cities. With a strong cultural ferment from various local and imported sources several cohorts of students banded together in cohesive relationships of artist studios. In Sydney – the artist-run Art, Empire, Industry was an important distillation in the early eighties of a couple of generations of ex-students who made their way to the southern city and around which I myself eventually became positioned.

On detailing the facts in this light the collaboration between George and myself in the exhibition at That in 1987 was an encounter in a period of intensely globalizing activity. A meeting between two globally displaced visual artists pressing The Culture in an authoritarian era of Queensland history. The door of That Gallery; an artist-run then located at the rear of 20 Charlotte Street in Brisbane,  opened for us via a chain of connections beginning with the relationship I was then in, working its way through an extended group of college associates. 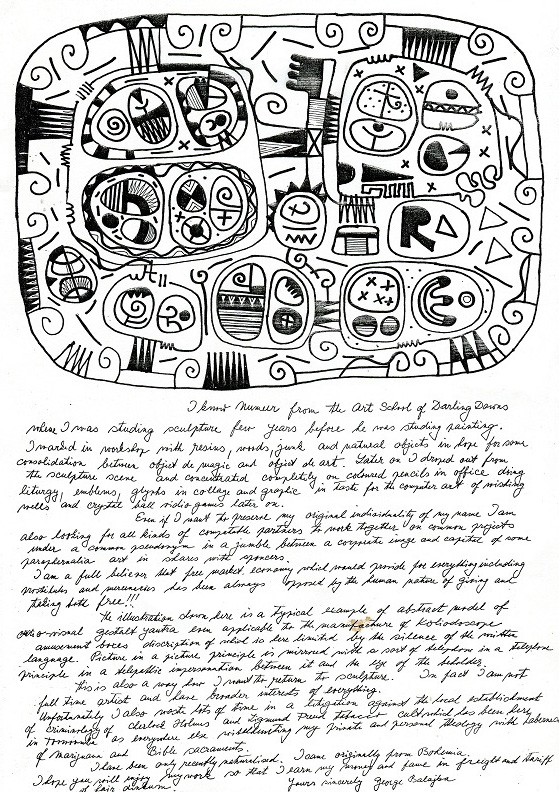