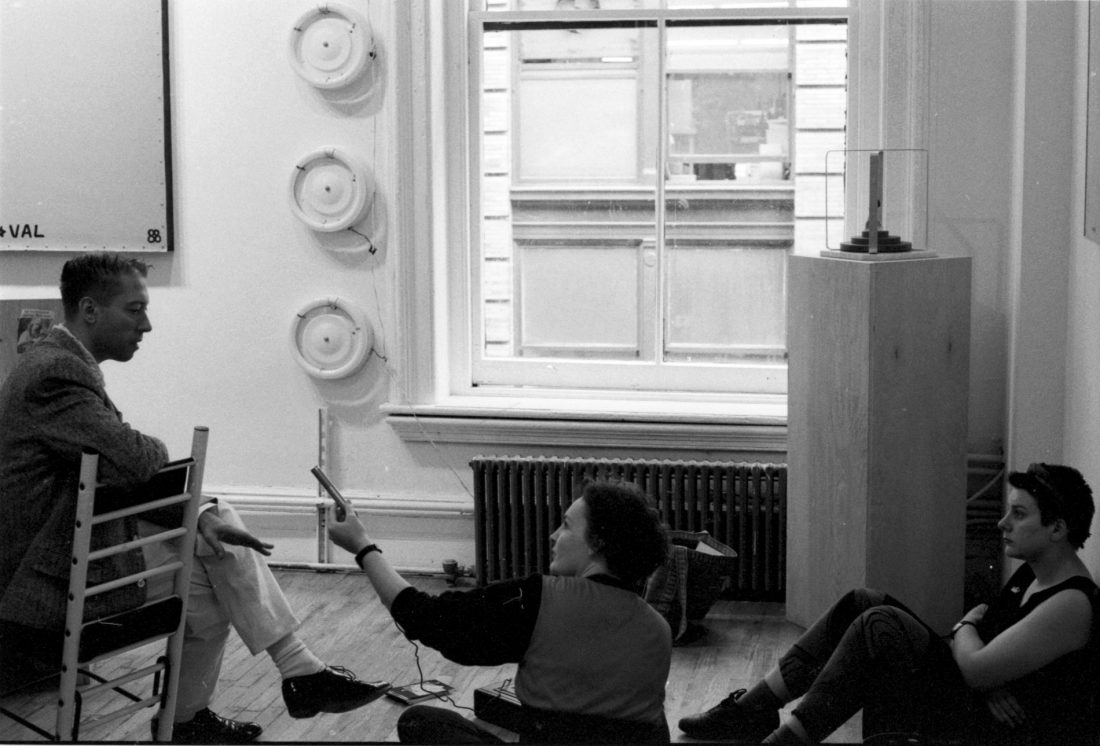 Perhaps one of the most memorable AXIS Art project interviews that Jay, Lehan and I organised while living on Clinton Street on the Lower East Side was with the fabulous duo, Liz N Val at the EM. Donahue Gallery, then located at 560 Broadway, New York.

We spoke in detail about their  immigration backgrounds, Liz was born in Warsaw Poland and Val was born in Minsk, Belarus. Together we spoke about the immigration stories of our artist colleagues living and working in Australia, the post war migration stories many of us had in common and what a short sighted, racist and homophobic place 1980s Queensland was at the time. Both Liz and Val shared similar accounts with us about their many artist colleagues from diverse cultural backgrounds who had been working and collaborating on lively street art and public art projects in the East Village for the preceding years.

New York City was changing so dramatically and so quickly, the libidinal city was being cleansed and sanitized of its urban viscera, the vibrant East Village scene was “dying”. Like many of their colleagues; and indeed our colleagues in Brisbane, who were engaged in artist-runs in the East Village and Lower East Side the difficulty many artists were feeling so palpably in that climate of gentrification and dispossession was about making the jump from street savvy artist-run projects into the more institutionalised and then, nepotism-fueled domain of commercial galleries, museums, curators and collectors.

Their exhibition at the time, Signature Work, May 12- June 11, 1988 was an ironic series of paintings and installations delving; in the words of curator Frank Vila:  ” in depth, into the ambiguity and archeology  of the sign: no Tag identification, at all, no other name to claim, just the inconceivable, and totally non-signature signature.”

Pictured above is a photo of Val being interviewed by my AXIS artist collaborators Jay Younger and Lehan Ramsay on a rather balmy spring day on Broadway in May just after the opening night.

For more about Liz N Val:

Liz and Val did a lot of exploring of their artistic expression, experimenting all the platforms that were available for their thirst to push the boundaries outside of the mainstream mold. They seek to boil the blood circulating through the veins of the establishment forcing them to engage, to take notice of what is underground?

They push many envelopes that were perceived to be or not idealistically speaking of being in the mainstream. Their drives to not let the institution dictates what is the meaning of art making, expressing to how they went about it all.

Thanks to their views, their love to just be themselves gives others who share similar views the same freedom or will; to not just settle for what may have been viewed as a dark hole for many artist that were not embraced by the ideologues of many institutions. It was a great pleasure to have interviewed them, in which I believe they serve a great deal of courage to the culture of art and the process which gave them great pride to carry out their boldistic goals to not maintain or carryout the status quo. Liz and Val a pair of bold and genuine expressionists.