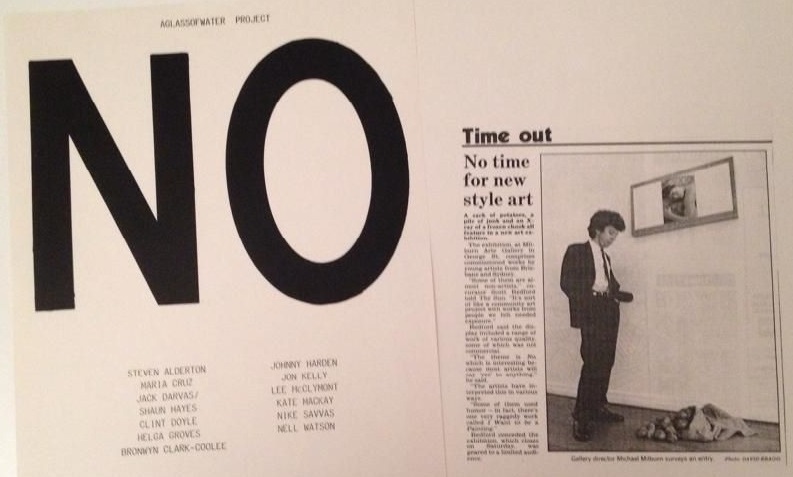 Housing the virtual, the radical, the displaced.

Artspaces run by artists are notoriously recrudescent. Unlike their entrenched institutional cousins, artist-run initiatives are often as ephemeral as the art they show. Over the past few decades Brisbane has played host to a number of notable ARI’s from THAT space in the 1980s to Space Plenitude, Omniscient, Kiss My Art, The Butterfactory, Bartleme Galleries, Boulder Lodge Concepts and Gallery Brutal/ISN’T in the 1990s. Though not widely known they represent a significant series of moments in Brisbane’s art history, showing exciting contemporary art and holding innovative performances and events. The Joh Bjelke-Peterson years fertilised radical, dissenting art across media, and as that dictator’s grip waned, artist-run spaces dwindled.

Happily, in the last few years, the post-Joh drought has been broken, and a number of healthy artist-run spaces have sprouted. As with their predecessors, these spaces focus on the sharpest edge of contemporary art—new media art (particularly moving image), ephemeral installations and performance. They tend to operate with exhibition policies that favour process-based works, events, and radical critique, and as ARIs perhaps always do, operate financially in a straitened, sometimes hand-to-mouth way. Queensland’s continuing resources boom doesn’t seem to have translated into piles of state lucre for the smaller artspaces; while both RawSpace and The White House, 2 recent artist-run spaces that rose to prominence in 2005, have received minor subsidy, they both subsist mainly by other means.

Robb Kelly, his sister Judith Kelly and Joe Slade began RawSpace with their life savings, taking out a prime piece of real estate in Brisbane’s South Bank and turning it into a café and contemporary art gallery space. RawSpace’s daytime café operations finance the riskier art activities which are held mostly at night. In 2005 they focused on residencies and exhibitions. Robb says that they were pleasantly surprised at the way so many of the artists “stayed on well past their residency, kept making art and mixing with other artists…it creates a real sense of community around the gallery.”

For 2006, RawSpace is restructuring to combine with other partners for a projected regional outreach residency project and extending the gallery space into the outdoor area at the front of the building. With its long, glass-fronted corridor shape, concrete-roofed entrance and key location in a main thoroughfare in Brisbane’s inner city, the space “comes alive at night”, and so RawSpace is planning to become a night-time bar with an ever-changing variety of video and web art on display. “Most gallery spaces are only open 12-5pm, Wednesday to Saturday,” Robb explains, “which makes it really hard for working people. Night-time is more available to more people, and lends a different atmosphere to the art. We think that by showing the work in a bar or club type of setting, we could build a community of regulars who will come to socialise in the presence of art…We can reach people who might be put off by that more stiff or regimented gallery context—and we’d be a place for artists and people who are aesthetically inclined to come, have a few drinks and check out some new media art.” This focus not only situates RawSpace as a very urban artspace, but also uses the space’s unusual architecture to overcome one of the main technical difficulties with staging new media art—projection conditions requiring blackout and the defeat of glare.

Like RawSpace, The WhiteHouse has received some grants, but its “benevolent dictators” Jesse Sullivan, Madeleine King and Madeleine Allen-Cawte have devised other means for funding their artistic enterprise. The WhiteHouse, Jesse explains, “is kept afloat primarily by our own financial contributions and hard work” which has involved “sourcing assistance from local businesses, artists and cultural workers, holding gigs and fundraising events within the space, and most recently, by opening our own in-site shop, the Cell.”

The advantage of not being tied to either state subsidy or art sales “means that the WhiteHouse is flexible in its structure…its use is not limited to gallery-based exhibitions, but incorporates a wide range of creative activities and events (such as screenings, gigs, workshops, swap-meets).” Architecturally, the WhiteHouse is a more traditional white cube space, but that’s where any sense of the conventional ends.

The free-form, anarchic The White House collective embraces Brisbane’s unique geography and attendant psychology, and according to Jesse, exhorts other artists to do the same:

Brisbane artists are off their heads. The heat and isolation drives people mad. The stuff that has walked through the door of The White House would make National Geographic shit their pants. It’s weird, it’s sometimes really ugly and sometimes really beautiful…we think that Brisbane is unique and people here make art unlike anywhere else. Yes, there is a tendency to look southward to our Melbournite and Sydney-siding cousins and copy them—but that exists everywhere, and we can just forget about all that stuff. What Brisbane artists do worst is copy their big city counterparts, looking for legitimacy. What they do best is thrive in the backwater territories, licking cane toads and spewing forth sometimes bizarre, but often poignant and very individualistic art.

In taking over the space formerly known as The Farm, which was partly managed by video art luminary Grant Stevens, The White House is continuing the tradition of ex-QUT students banding together to operate spaces to show contemporary art. Aware of what Jesse calls “the problematics of new technology”, they buck contemporary trends and frequently show old media, like film, and take a critical attitude towards video, computer, internet and other new media art. Jesse says that “a lot of new media art is very clean and I think stale in terms of what it deals with and the concepts it struggles with, whereas a lot of the work that we’re presenting takes on a whole gamut of problems and sticky ideas. What we do is a bit more gritty.” In the 6 months of operation to date, The White House has shown a number of innovative programs engaging specifically with ideas of new and old technology, including VIRUS in August, exploring the aesthetic history of computer viruses, and Hoarders of the Absolute, a 3-day multimedia environment involving digital and film projectors, found object installations, music and performance.

Though not an artist-run initiative, an innovative approach to new media art is also on display in the Infozone project at the Queensland State Library. With the new State Library premises currently under construction, temporary space has been set up in which several programs of recent video artworks, compiled by guest curators from the Queensland Artworkers Alliance, have been shown. Under the watchful eye of Kath Kerswell, the dynamic Exhibitions Project Officer, Infozone has shown a number of programs of contemporary video art on its 2 large plasma screens on the main floor, and on a smaller monitor on the mezzanine level. These shows have highlighted the creative uses of space using a variety of multimedia works, including Jemima Wyman’s brightly coloured floral video art and Seline Braine’s thought provoking performance video, I WANT TO BE WHITE, referencing both the tradition of body art and the artist’s Sri Lankan heritage.The works are all shown silent (many of them were originally so), turning the requirements of their location into a positive, forcing a kind of visual contemplation undistracted by ‘the grand opera’ of moving image sound. In the quiet, high-ceilinged library setting, suffused with the strong light reflecting off the river, streaming in through huge windows on one side, it feels surprisingly appropriate to be contemplating quality video art. The Infozone screens are a bold and clever big institution response to the question of public art. Meeting the demands of staging it in a large, brightly-sunlit space, the library should be applauded for its recognition of the contemplative possibilities of the viewing context.

Both RawSpace and The White House have a strong awareness of their place in the overall picture of art in Brisbane, which they identify partly by the gaps or limitations of the big institutions. Robb Kelly explains that RawSpace, for its residencies, focuses on those emerging artists who are “left out of the loop” of normal modes of support: those artists who have left art school but are not yet established, or who have become established in one medium but want to explore another mode. Robb says “if you’re over 25 and you want to explore a different sort of practice, what are you supposed to do?” RawSpace offers as a category ‘over 25 and emerging’, and has worked with a number of ‘older’ artists and artists established in other media wanting to branch into new media. An example is the charcoal artist Tanya Mason, who, through a RawSpace initiative “was able to work with a computer in 3D to create moving image works, and then exhibit them.

The WhiteHouse sees itself providing a place for experimental art that is so new it has yet to be institutionally approved (especially video and new media art by artists not yet artworld celebrities), or so ‘archaic’ it has no ‘market value’ in audience terms (as in their screenings of experimental film). Major institutions like QAG, Jesse says, “will have to stop somewhere at that cutting edge, or at least nullify the more radical aspects of it to open the work to large audiences and not alienate them. To an extent this is also true of the IMA, which tends to demand a level of professionalism that may not actually be present in what may be considered ‘radical’ art.” This is not necessarily a bad thing, he says:

…radical artforms do tend to get swallowed and gentrified by institutions: the fact that they are not represented by them only helps to further radicalize these submerged cultures. The WhiteHouse thrives in its place to support this work, and we’d be very upset if it was all ‘okay’ by institutional standards. Radical work should offend, challenge and make you question what the fuck it’s doing, and why it’s doing it. If you get it within 3 seconds of walking in the door, then it’s already been laid out somewhere before—it’s not exactly pushing the boundaries or cutting the edges of the hedges.