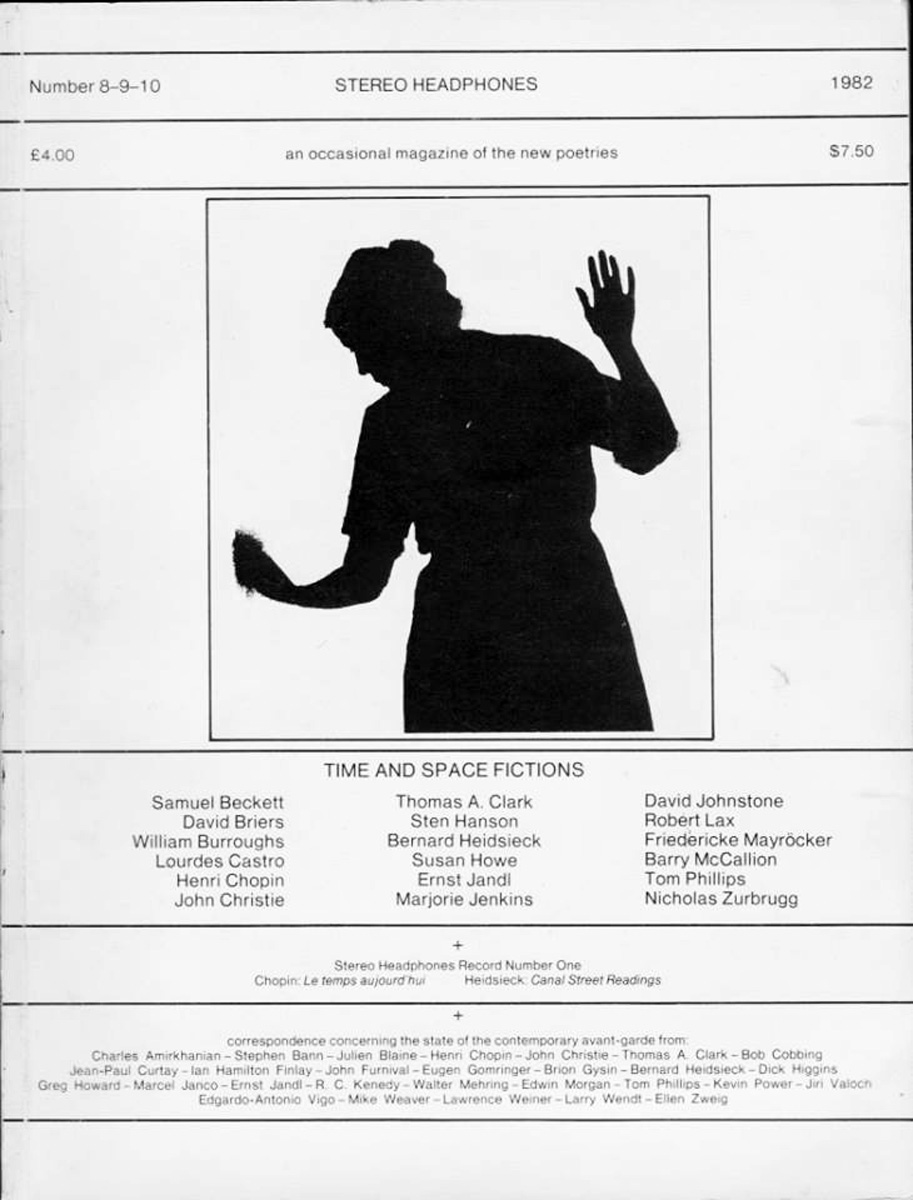 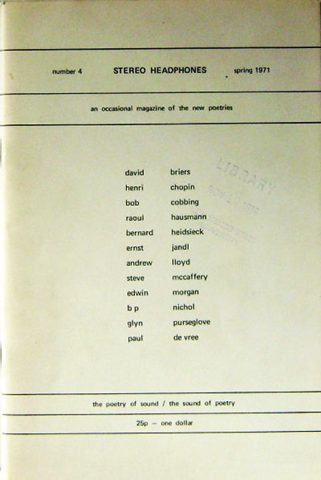 Stereo Headphones billed itself as “an occasional magazine of the new poetries” and published only ten issues in thirteen years. Of these, two were multi-issues so only seven actual magazines were published.

Zurbrugg, then a poet and artist in his early twenties, served as both the editor and publisher. He later turned to academia, publishing several titles on art and poetry. Zurbrugg died of a brain haemorrhage at the age of 54, in 2001.

With the death of the poet and artist Nicholas Zurbrugg, following a brain haemorrhage at the age of 54, I experience the realisation that the departure of a close friend, with whom one shared many a meal swapping anecdotes on avant-garde writers and performers, means that life will not be quite as good again.

Zurbrugg was the professor of English and cultural studies and director of the centre of contemporary arts at De Montfort University, Leicester. He was also the author of two major books on postmodernism: The Parameters Of Postmodernism (1993), and Critical Vices: The Myths Of Postmodern Theory (2000).

His work was concerned with theoretical investigations, explanations and appreciations of areas of creative practice, such as concrete poetry and the multi-media avant-garde, which genuinely excited him, and to which he remained loyal; while always open to new ideas, writers and artists, he was not one to write a book and then “move on” and abandon.

There was work by individual writers and artists which he continuously explored: the sound poet Henri Chopin and the writer William Burroughs are examples. More recently, he had also become interested in cyber artists such as Stelarc and David Blair, and video art, especially when practised by someone as challenging as Bill Viola.

As a theorist, Zurbrugg had an individual “take” on postmodernism, advocating an interpretation which placed an emphasis on the deeper meanings connected to the use by artists of new technologies. The Google internet search engine is perhaps a crude measure of worth. Nevertheless to type in Nicholas’s name yields pages and pages of website links: a testimony to just how productive he was as a writer and editor of books and a contributor to journals, as well as an organiser and attender of conferences throughout the world and a curator of exhibitions.

Initially educated in Switzerland, the country of his father’s birth, Zurbrugg studied comparative literature at the University of East Anglia, Norwich, taking first-class honours. He completed his doctorate on Beckett and Proust at St John’s College, Oxford, and, in 1978, took up an academic post at Griffith University, in Brisbane, Australia. He returned to Britain after 17 years to head the department at De Montfort in 1995.

A poet and artist himself, his commitment to creativity was a genuine one. He enjoyed spending time with poets and artists, because he felt himself one of them. As a young man in the 1970s, he was significant as a small press publisher, editing the cult magazine Stereo Headphones, where concrete poets such as Chopin and Bob Cobbing would appear alongside the more established Beckett and Burroughs.

He often brought academic theory and creative practice together. This was the case with Rethinking The Avant Garde, an event held at De Montfort’s centre for contemporary arts in 1998. Academic papers were given at a weekend which also included presentations by such avant- garde luminaries as the Canadian film-maker Michael Snow and the body-modification artists Orlan and Stelarc.

Black polo-necks were much in evidence, and there were times when the avant- garde felt paradoxically retro; then, suddenly, there would be a fast-forward to new concepts about art and the internet, and a realisation that Zurbrugg had once again provided an arena for exciting contemporary ideas. I sometimes feared that such events would have an embarrassingly small attendance, but I always underestimated his talent for filling auditorium.

At the end of last year, at another centre for contemporary arts conference, Nicholas made a point of putting together an older generation of concrete poets – Chopin, Cobbing and Emmett Williams – with a more recent generation of language poets, including Charles Bernstein. This was typical Nicholas – bringing people together, not for friction but to find connections and enjoy differences. Also present was the Verona publisher Francesco Conz, with whom Nicholas shared an interest in both concrete poetry and the fluxus movement.

Nicholas’s death will bring sadness to many: at De Montfort, we have lost a colleague we respected and a friend we loved.