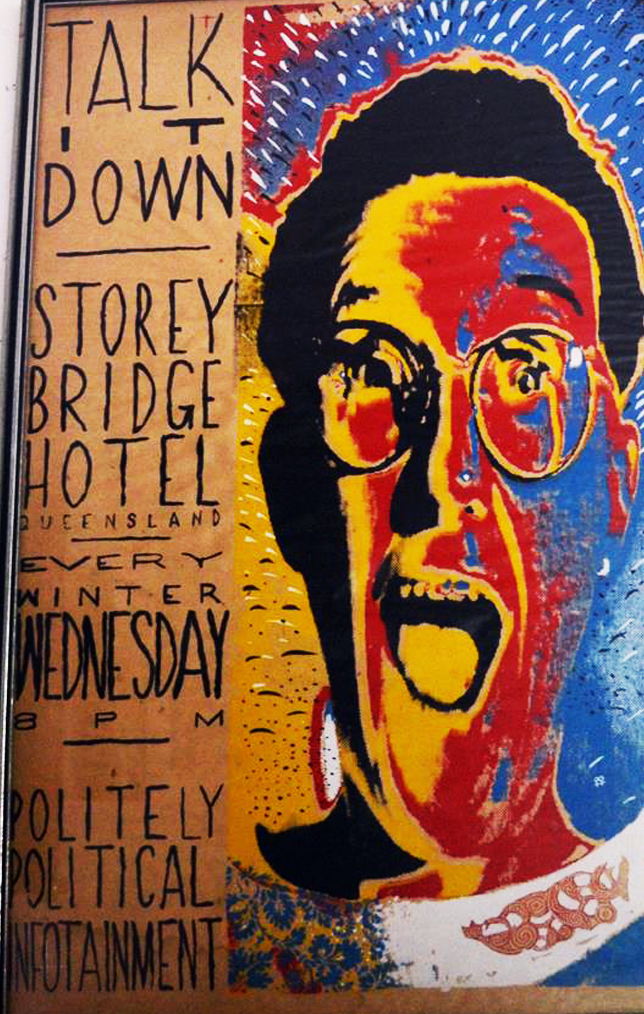 Talk It Down the politely political Cabaret was conceived in Sydney the late 80s with two friends Graham Cox and Kylie Murphy. At the time like a lot of young Queenslanders we were hanging out in sweet Sydney drinking Coopers stubies over the bars of inner city pubs around Petersham, Newtown and at “ Poets in the park” at the Harold Park Hotel.

Whilst discussing our imminent return to the “we make it grate in the sunshine state” we hatched a plan to create a poetry based (why I don’t know) cabaret/club/event thing? Graham and I had Environmental Science degrees he’d been writting, sci fi. , gaming stuff and occasional poetry I was a community arts/activist type, Franklin Blockade etc. working in adventure travel. Kylie was a Murdock jouno. who had amazing organisational skills and she inspired us both to no end. Although Joh Bjelke and his regime (Cronies) were still in power the race was on to return home and assist in the enlivenment of the cultural quagmire called Queensland.

I returned via a two or three month stint with the ”Peace Train” being the International year of (not trains) mostly in the N.T. So I was particularly motivated and even more aware of the power of music and Performance. On arrival, in the summer of 86 we remained naively determined to do something, bring a little of Sydney to sleepy old Brissie. To entertain but to stir the pot, to cross-fertilize was a favorite bit of our rhetoric.

We knew and or had a strong sense of the large amount of creative/political “stuff” that was oozing out of Brisbane at that time. Pubs were our first port of call and the Story Bridge hotel was canvassed and a deal was done they would give us nothing but let us run our “thing” in the Bomb Shelter bar every Wednesday night but not in summer.

For marketing we stole the Warhol banana from the Velvet Underground and created a T.I.D. stencil which we plastered all over some old fridges that we then strategically placed by some inner city roads. It still seemed a bit tricky at first to attract people, mostly poets to T.I.D. but there were a few we could rely on like Megan Redfern ,Bob Morris, Margaret Clift and Monica Gilfedder . They became regulars with others like Ross Clarke, Kieran Ridge, Geoff Shera, Dusan Bojic and May Flannery. Not to mention effigy stabbing John Jiggens.

The first year was very challenging on the ‘dole” with only Raffle income and some free beer. Ross Fitzgerald’s appearance was demonstrative of our adhoc identity, is this a literary venue or music or a soap box for anyone, who may or may not be half pissed to have a say.

Well it was all of those things and more, the “open mike “ segment was intrinsic to what we thought we were doing. It didn’t take long for the TID community to develop, cross-pollinate and be simulated and agitated into doing whatever the fuck they wanted to do. This included persons recently out of jail, activists like Bryan Law (soon to be Bryan Freemarijuana), Eugene Gilfedder doing an experimental piece or indigenous folk having a rave, which discombobulated the fairly reasonable publicans’ on a few occasions. The mutual interests of the “Brisbane Art Scene” generated and encouraged lots of persons to get up and have a go. Music as always was grist for the mill and I can safely say we facilitated and or incubated quite a few bands.

Small World Experience, Wondrous Fair, Holy Ghosts, Madam Bones Brothel, Hounds Of Dilemma, Trash of All Nations and The Ziggurats to name a few of the many musical assemblages we’d see. One reason the second season took off was despite the fact that the Australia Council declined to fund T.I.D. mainly because it was being run in a commercial venue (a Pub). The Story Bridge decided to or had to give us $ 200 or 250/night. But with this we actually paid a few performers. It was all culture to us, Qld. in the Expo year look out it was on. As bad as the political scene was, the poets were still there in force and enjoying themselves, that was important, having fun and being entertained was a priority, despite some of the shit that was going down (like the evacuation of West End).

I had learnt to create characters like Dick Deadly, Declan Woosy and Rowan the Gypsy Gardiner. Who enabled me to facilitate and manage what was on occasions a raucous beer fueled poets party. I too was continually inspired by performers like Eugene, John Haag and Annie Lee (now a Kransky Sister), who liked TID’s unrestricted intensity.

As time went on people offered to design the monthly handbill for $20 and it become a little self organizing anarcho-syndicate. Canvassing performers at the venue, phone numbers were exchanged and each months bill would fall into place. As long as we wound up by midnight as per the license nothing seemed to matter. There were even mini buses from the growing Valley club scene that would arrive and take people away, quite handy also because by then the crowd might be very invigorated and in dire need of more stimulation. The Cops didn’t even show up until about our 3rd. or 4th year (I had heard there was an “arrangement” with the Hotel).

Towards the end it did seem like a workshop for alcoholic guitarist/poets. The pub environment does ware you down a bit and over the years it had a reputation of a place where anyone could do anything (that we had cultivated) that wasn’t always a good thing. Kylie and Graham had moved on and I was getting considerably more Film work, which was proving hard to juggle. So all good things come to an end but man we had some fun.

There are many other people that deserve mentioning so I apologize for that but they know who they are and many of them gained invaluable performance experience especially in a drunken setting. 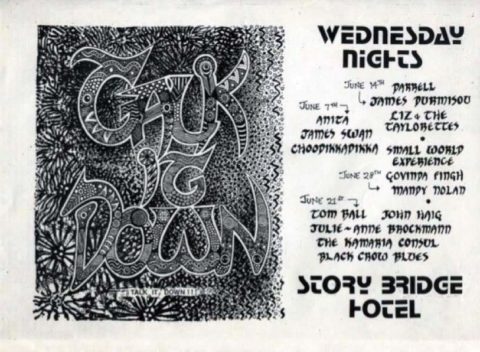 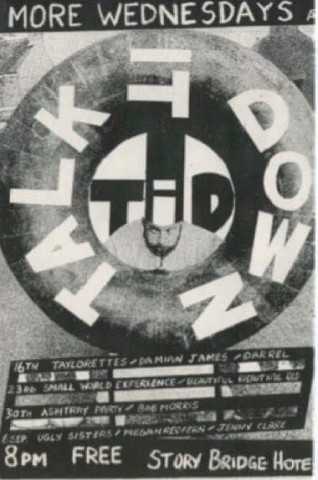 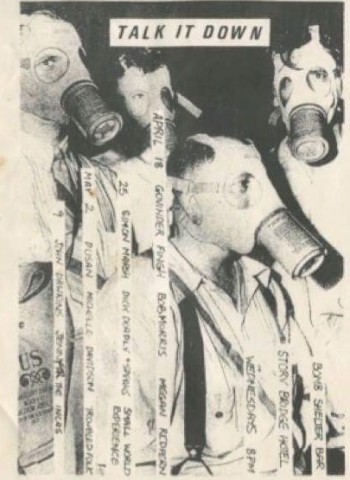 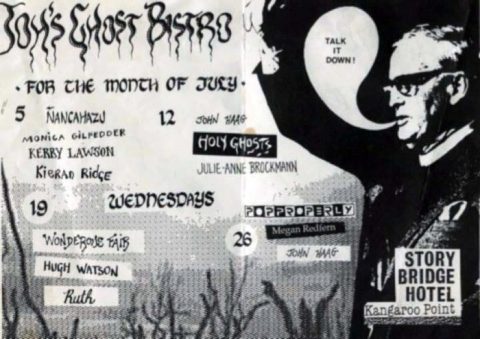 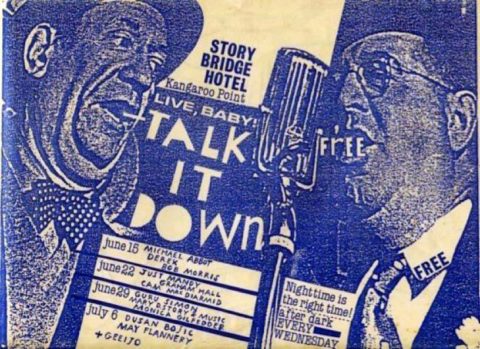 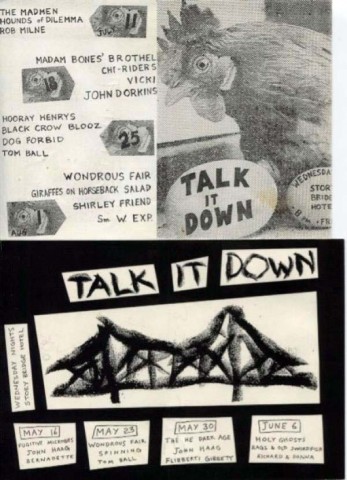 Brad Pimm would also like to acknowledge the many, many talented Talk It Down (TID) ephemera designers including artists, designers and musicians Ian Wadley and Pat Ridgewell and so many Brisbane creatives who made it happen each week.