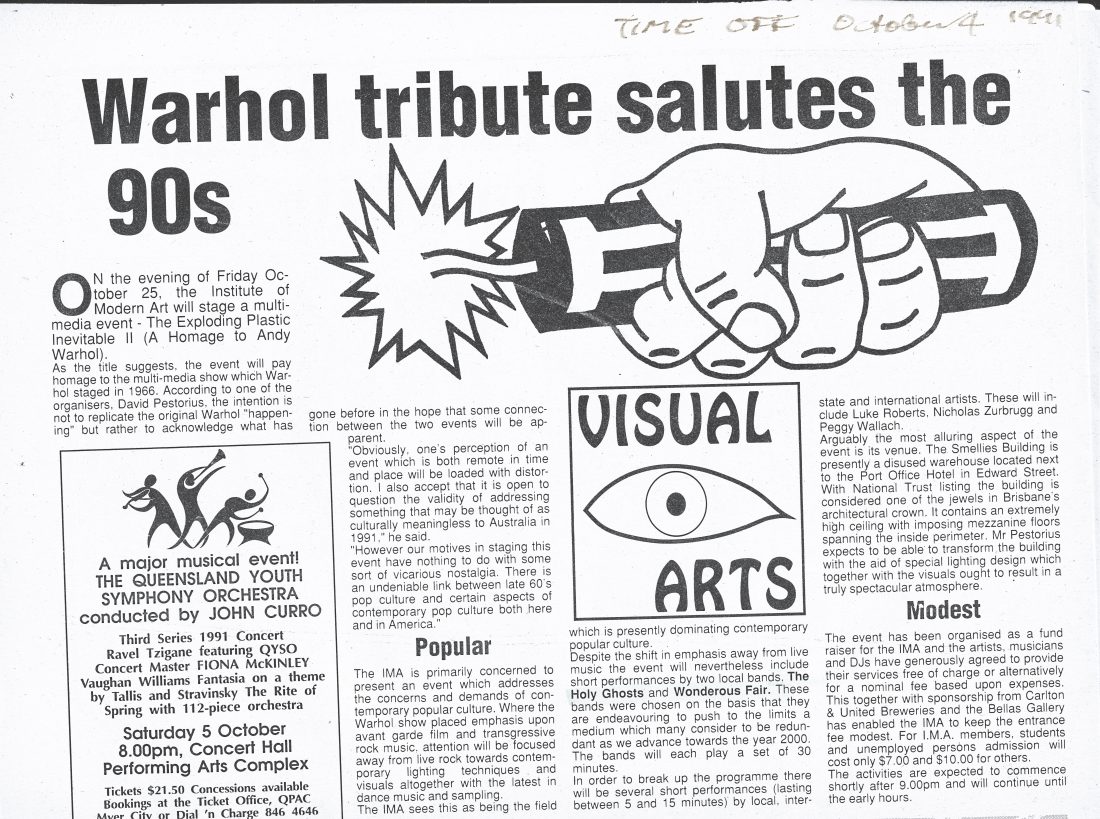 Just been updating a bio, trying to think what might be of interest… I never went to Art College although almost everyone I played music with did. I did law part time from 1978 to 1984, the year my second daughter was born. Both girls went on to do honours degrees at Art Colleges, oddly enough, one in Hobart, one at the QCA. I quit the law some time ago after working for myself, then Caxton Legal Service and lastly Legal Aid, where I gravitated towards representing women in domestic violence scenarios in the Magistrates Courts. So, I never was an artist, and had connections with only the A.R.I. scene in the eighties and nineties, by way of being a musician. Most of the bio is irrelevant to you, but I leave it in by way of completeness.

Bands: Former member of following Brisbane Bands, variously on vocals/ alto saxophone/ ensoniq samplers/ fx knob twiddling: Seven Hills Art College band ‘The Lamingtons’, ‘Wondrous Fair’, ‘Frankly Zappa’ (Zappa tribute band), ‘Sons of Bee Gees’, ‘Muddy Nolan and the Twisted Hearts’, ‘The Nutty Squirrels’, ‘Lost in Space’, ‘The Safari Suits’ (live music to silent movies in Fortitude Valley), and once played as guest with ‘My Three Sons’ at a ZZZ joint effort Qld Uni, and the ‘Lemon Fabs’ at the old Hacienda Fortitude Valley, presently a member of ‘Sniffy’ (a recording only band of ex Kenmore High School musicians). Played a gig a year or two ago with ‘0+1’ in Hobart with Peter McPherson (ex ‘The Pitts’) and Irena Luckus (ex ‘Zero/Xero’) and recently doing solo synth/sampler performances at the Laura Street Festival, 2014 and 2015 and at Steven Bowerman’s Vision Gallery in Boundary Street, and as ‘Bouwhouse’ with Nigel Kimber in the Fortitude Valley and at the ‘Nine Lives’ artist co-operative exhibition at the Morningside School of Arts hall in 2016. Presently recording in a synthesizer trio, under the name ‘Float Tank’ with Jandy Rainbow and Dorian Dowse.

Live soundtracks, in band ‘The Safari Suits’ (with Leo Power and Neil Neilson) for Brisbane Independent Filmmakers, to Salvador Dali and Louis Bunuel’s: Un Chien Andalou, Tarzan King of the Apes (we all bought Safari Suits for that), and the Buster Keaton movies: The Golf Nut, and The General.

Theatre and soundtracks for film: performed with community Street Arts (Thrills and Spills Circus) in 1984, and later: musician-in-residence for Queensland Performing Arts Trust’s 1994 Out of the Box Festival in Fractal Theatre’s Scratch and Scrap Opera… also wrote the music for Fractal’s 1994 production of Coriolanus, and did a performance piece with them at Livid Festival, La Boite Theatre’s 1997 productions of Mr Melancholy, and The Shoe Horn Sonata, and the 1998 production of X-Stacy, On Giant’s Shoulders production of Holy Days, and Wolf’s Lullaby, and Purple Pears Production’s Oleanna, and on some movie soundtracks, including (with the Lamingtons and actor Noni Hazelhurst) on Jackie McKimmie’s ‘Stations’ (1983), and Purple Pear’s ‘Shades of..’, and a children’s musical ‘Red Rock Rebel’ with Christine Smale for Nash Theatre 2005.

Did the sound for Stephen Henry’s short movie, ‘Nothing Much’ using music from our band ‘Sniffy’ in 2012.

More recently, did music/ musical direction/ sound design in Fractal Theatre for the ‘Anywhere Festival’ to the play, ‘My Love has a Black Speed Stripe’ starring Sandro Collarelli, performed in Brisbane, Parramatta and Ipswich in 2015.

Artist Run Initiatives [ARIs]:
performed in Seven Hills Art College band the ‘Lamingtons’ with lyricist/ drummer and Fine Arts lecturer Chris McKimmie from 1980, performing at various college events, including a performance by Jeanelle Hirst at the Seven Hills Campus. The Lamingtons had a shared rehearsal space at Red comb House in the early eighties. Also, in that decade, in band ‘Wondrous Fair’, playing political fundraisers and various art openings including ‘The Exploding Plastic Inevitable’ at the Smellies Building, the now heritage-listed warehouse at 32 Edward Street, the City. Performed an original musical set with artist Eugene Carchesio and others for a Women’s Legal Conference at Caxton Hall in that time period, and with Jeanette Gilfedder for some art performances in and about the city centre.

Deborah Cavallaro, who played with her then partner and film student Stephen Mackerras in Wondrous Fair, went to Seven Hills Art College and probably has a lot of recollections as to who was doing what. We were neighbours in the grand old mansion in Hamilton, Lochiel, home to several artists and the perfume maker Jonathan Midgely – that was quite a nice scene. I am not sure I could provide much more than my recollections of playing vehemently non-commercial music with like-minded dilettantes as opposed to shedding light on the nature and composition of artist run initiatives.

I could, for example, provide digitised copies of the video clips of Wondrous Fair – I spent some time doing this from rather old video tapes – but they aren’t of anything A.R.I. related, if you know what I mean – and are more testament to the editing skills of Stephen Mackerras. The band members made their own costumes, and were involved in the process. I have a fair bit of poster art, especially the Lamingtons – large format screen prints knocked out at Seven Hills, but Wondrous Fair as well, including the poster for The Exploding Plastic Inevitable. That was an IMA show. There were photos of the Queensland Art Gallery exhibition of Political Posters in 1991, Wondrous Fair ‘Signs of the Times’. Not sure who curated that, Clare Williamson?

Not sure if you have seen that newspaper clipping from Time Off. [below fyi]

Is this relevant to your A.R.I. project, particularly, though? We did play at an exhibition Racheal Bruhn, which I might have forgotten but saw it on your Facebook open group page.

Just having a look on my computer, there were things like a benefit for a magazine launch for a subcultural cafe we played at Easts, by the looks of the following flier, but I have no idea what that was about. And a Brisbane Community TV station, that later became Briz31 I suppose, played a Lamingtons video clip on an early broadcast – I think I have a newsletter about that.

What do you think? Is this a bit outside the realms of artist-run initiatives, as interesting as it might be for the DIY band scene?

Brisbane DIY, Wondrous Fair, The Lamingtons, The Exploding Plastic Inevitable II in the 1980s and 1990s – A series of memory notes by musician Michael Bouwmann

Brisbane DIY, Wondrous Fair, The Lamingtons, The Exploding Plastic Inevitable II in the 1980s and 1990s – A series of memory notes by musician Michael Bouwmann