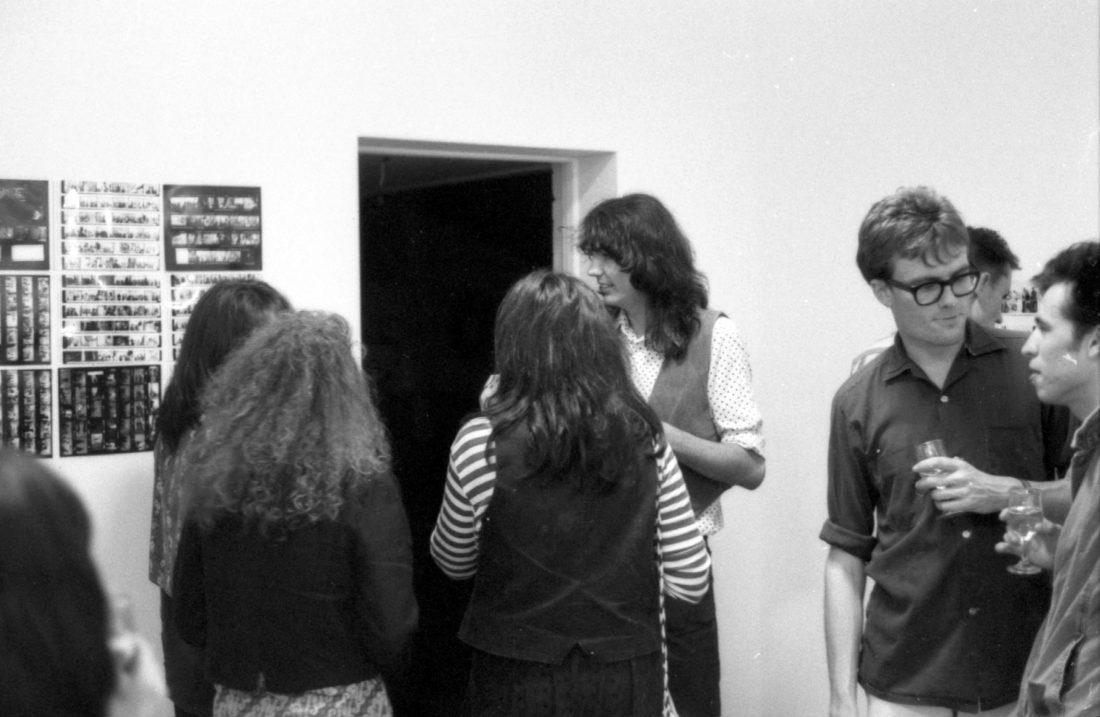 That Contemporary Art Space, also known as That and That Space was an artist-run space founded at a public meeting convened by then Institute of Modern Art, Artist Director Peter Cripps and by artist Paul Andrew in October 1984. Alongside an expanded group of artists at a follow up meeting at John Waller’s Queenslander share house in Moreton Street, New Farm in November 1984 the That Collective emerged.

After much searching for a physical space in and around the Brisbane CBD and inner-city suburbs area along with artists John Waller and Dianne Heenan That Space found a home, in an abandoned warehouse in the city. That opened as a combined independent art gallery, self-publication, indie band venue, warehouse party site and artist studios (12 artist studios in number) in 1985.

That Contemporary Art Space became the official registered name as Corporate Affairs had rejected our application for registering That and later That Space. We needed a business name registration in order to access public liability insurance. The artist-run space was situated in an old, and potentially heritage listed light industrial warehouse building with an extraordinary clerestory on the upper level. It was located at the rear of 20 Charlotte Street in Brisbane Meeanjin.

In 1986 an office studio for the Queensland Artworkers Alliance [QAA operated in Brisbane from 1986-2011] was established before the QAA office relocated to 28 Twine Street, Spring Hill in 1987. An important fixture for many during this time was a share landline phone which was available for use by artist members and others when not everyone had landlines nor could afford them. A small donation was made for calls by placing loose change in a small glass trust jar beside the phone.

Also in 1986, in collaboration with Bell Tower Studios we opened That Annexe in Wickham Street, Fortitude Valley. This was considered to be a back-up plan in the event that the building at Charlotte was demolished, which was always a possibility. Precarity is an ongoing, and often anxiety-inducing characteristic of ARIs. That Annexe operated only during 1986. In 1987, after many negotiations we were able to access a storage shed at 20 Charlotte Street; which was previously inaccessible to us as the real estate agency were using it for their archives. This space, which was commonly known as The Garage, was also reactivated and became the home for many one nighter exhibitions, art installations and artist studios in 1987 before we all moved out in January 1988.

Sadly, like many potentially heritage listed buildings in Brisbane in 1988 the old light industrial and light-filled warehouse was in fact demolished in February 1988, along with a feeling of much grief and loss, with many artworks, ephemera items, art materials and studio furniture to make way for a Telecom skyscraper.

What is “the shared camera” ?

Artist designer and educator Jane Richens was the kind keeper of a 35 mm Pentax K 1000, a standard issue “student” camera used widely by artists and art student in Queensland and elsewhere at the time. The Pentax K1000 (originally marked the Asahi Pentax K1000) was a popular camera around the globe and had an interchangeable lens, 35 mm film, single-lens reflex (SLR) camera, and was manufactured by Asahi Optical Co., Ltd. from 1976 to 1997, originally in Japan.

Jane had an artist studio upstairs at That Space for almost two years. And this robust workhorse of a camera was safely kept in a brightly coloured woven basket in amongst her masks production and artist kit; all those magical papier-mâché essentials, op shop treasures, glitter and sequin collection alongside a dress-up box overflowing with retro frocks, shoes, gloves and hats.

It was this much pre-loved 35 mm camera that was employed and shared between artists at That Space over the years to document the art and culture events, opening nights, fundraisers, forums and social gatherings organised at That Space and and in and around Brisbane CBD during the December 1985 to February 1988 period.

It was considered a necessary technological element of the artist’s ephemera being produced at the time, which was collected and held in the That Archives. These archives like the share telephone were also accessible to artists; they included flyers, invites, zines, newsletters, mail art, posters and leaflets from around Brisbane and nationwide. These archives were also delightfully peppered with glitter of every imaginable colour, shape and size.

These archival items were largely organised by Jane and myself into Manilla folders held in 12 cardboard Marbig archive boxes. Some of these boxes of artists’ ephemera have survived the silverfish and insect infestations over the years and are being preserved through digitisation. Since we began the ARI Remix via social media in November 2011 these archival resources; often with the glitter loosely in tact, exist now in both physical and digital forms, alongside artist interviews, personal stories, anecdotes and asides are helping to grow and expand the ARI Remix living archives today.

The key aim of the shared camera documentation; largely grainy B&W in nature, was to gather photographic evidence of artist-run culture during the operation of That and to use these photographs, negatives and photographic proof sheets ( less expensive than printing photographs) in the self-publishing works we collaborated on. In zines, newsletters and in actual archival art works.

This included the art installation of ‘proofs’ staged at the Museum of Contemporary Art in 1987 pictured above. And by way of an aside, M.O.C.A  was instigated by arts patron and artist-run supporter James Baker. Located at 164 Melbourne Street, South Brisbane, M.O.C.A was one of the only major Queensland institutions during the years 1987-1994 to actively support artist-runs and exhibit them as important cultural organisations collectivising in their own ways and in their own right.

In the 1984 to 1987 period in the absence of a formal and local contemporary art magazine, using a camera like this was considered a direct response to an existing gap in art publishing and media. For many artist it was also considered an unruly way of creating evidence, of troubling the notions of authorship around the then current understandings of experimental photographic practice. The shared camera  was conceptualised as a community-led camera, were anyone was able to use it to take photographs. It was also loads of fun using it and handing on the camera to friends, strangers, lovers and colleagues. It was also a space where I learned 35 mm camera skills, with many quick on the spot mentoring moments as the camera was handed to me.

As a result, these images are often personal, candid, humorous and social. The many artists who participated in this documentation; who I recall at least  – at arts occasions that were also very celebratory, educative and informal in nature – included Jane Richens Brian Doherty, Jay Younger, Anna Zsoldos Lehan Ramsay, Adam Boyd, Russell Lake, David Gofton, David Gorton, Belinda Gunn, David Holden, Michael Curtis, Martyn Sommer, Gary Warner Megan Hawkins, Mitchell Papi, Henry Davidian, “Darren’ , yours truly and so many others too. (please any memories and names in the thread below).

In 2016 and 2017 artist Jane Richens kindly digitised many of the shared camera collection of ‘at risk’ negatives, including many that bear the brunt of temporalities where this type of amateur (for love) DIY archiving occurs, and where, over the course of decades, the residues of decay, scratches, mildew, dust, cockroaches and mites. The ARI Remix ‘living archives’ internet artwork, here at remix.org.au was included in the ephemeral traces exhibition at the University of Queensland in 2016. It was placed alongside a digital video work comprising a selection of the shared camera images.

They are shared here in a digital form in the ongoing ARI Remixing this year with love for your enjoyment, for prompting memory, for storytelling, for new collaborations, and, hopefully for shared affecting experiences into the future. 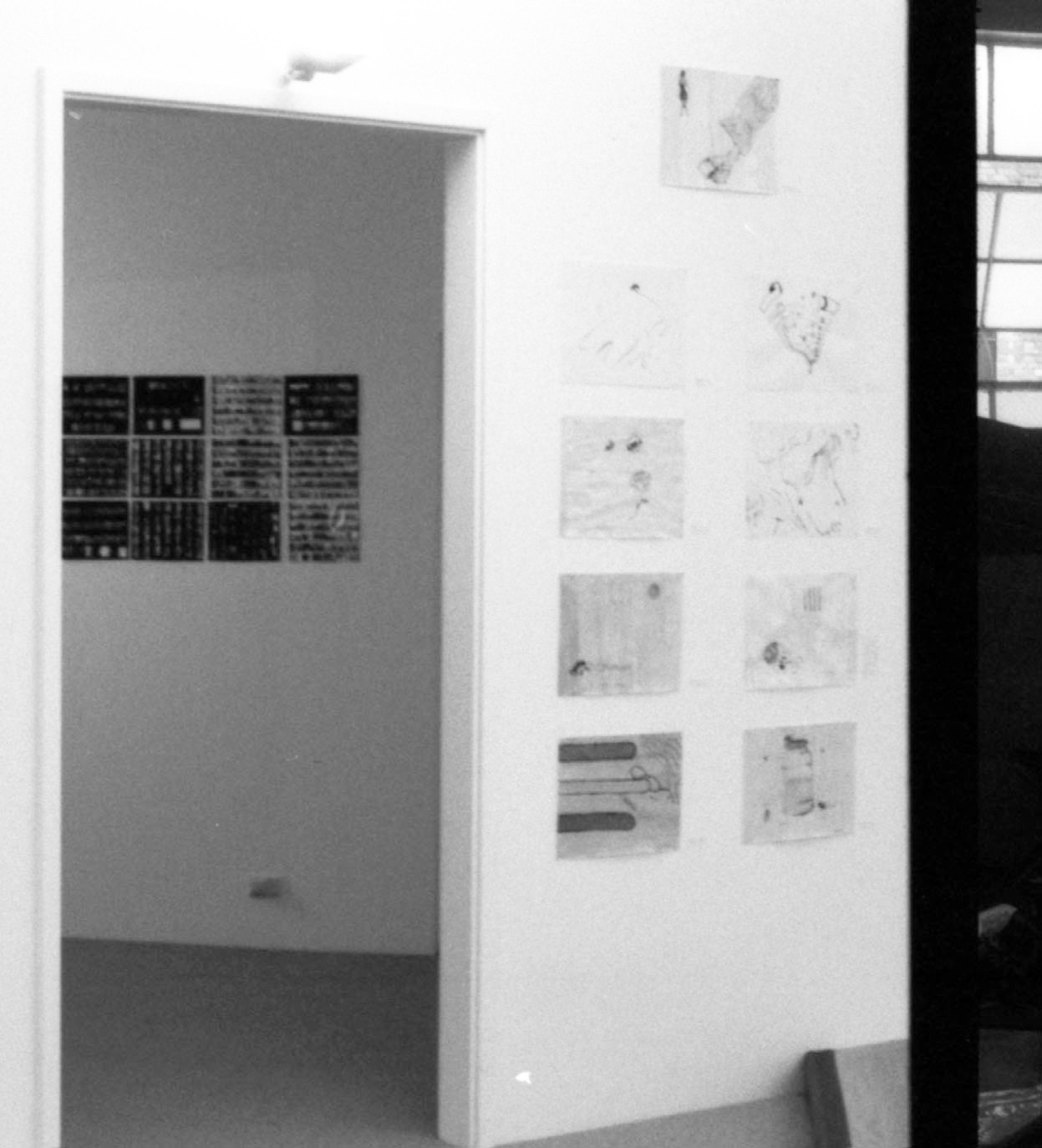 Imagine That – a group exhibition by artists at That Space December 1987 staged at the Museum of Contemporary Art, South Brisbane [M.O.C.A} Photo: The Shared Camera 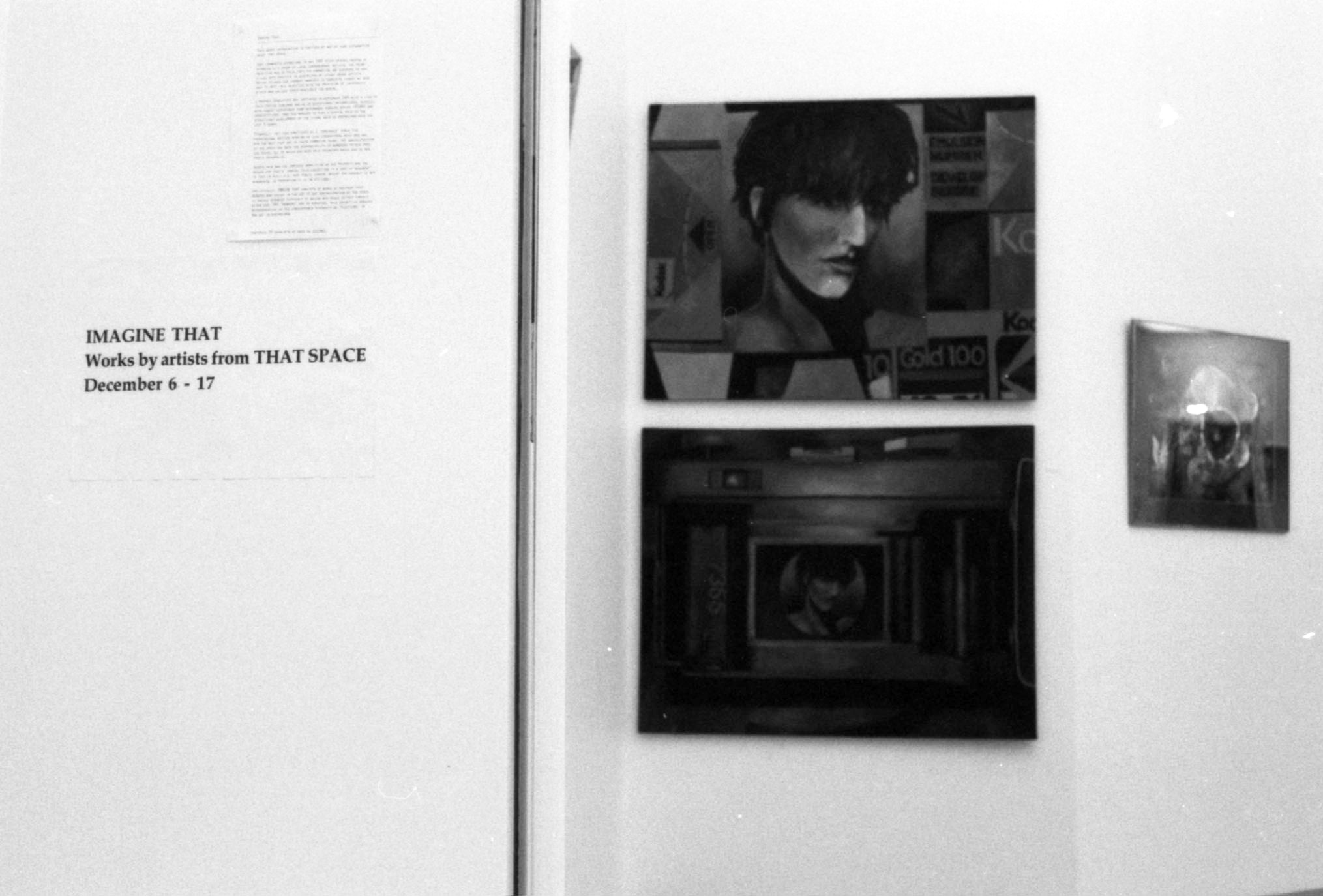 Imagine That a group exhibition by That Space Artists staged at M.O.C.A , South Brisbane, 1987 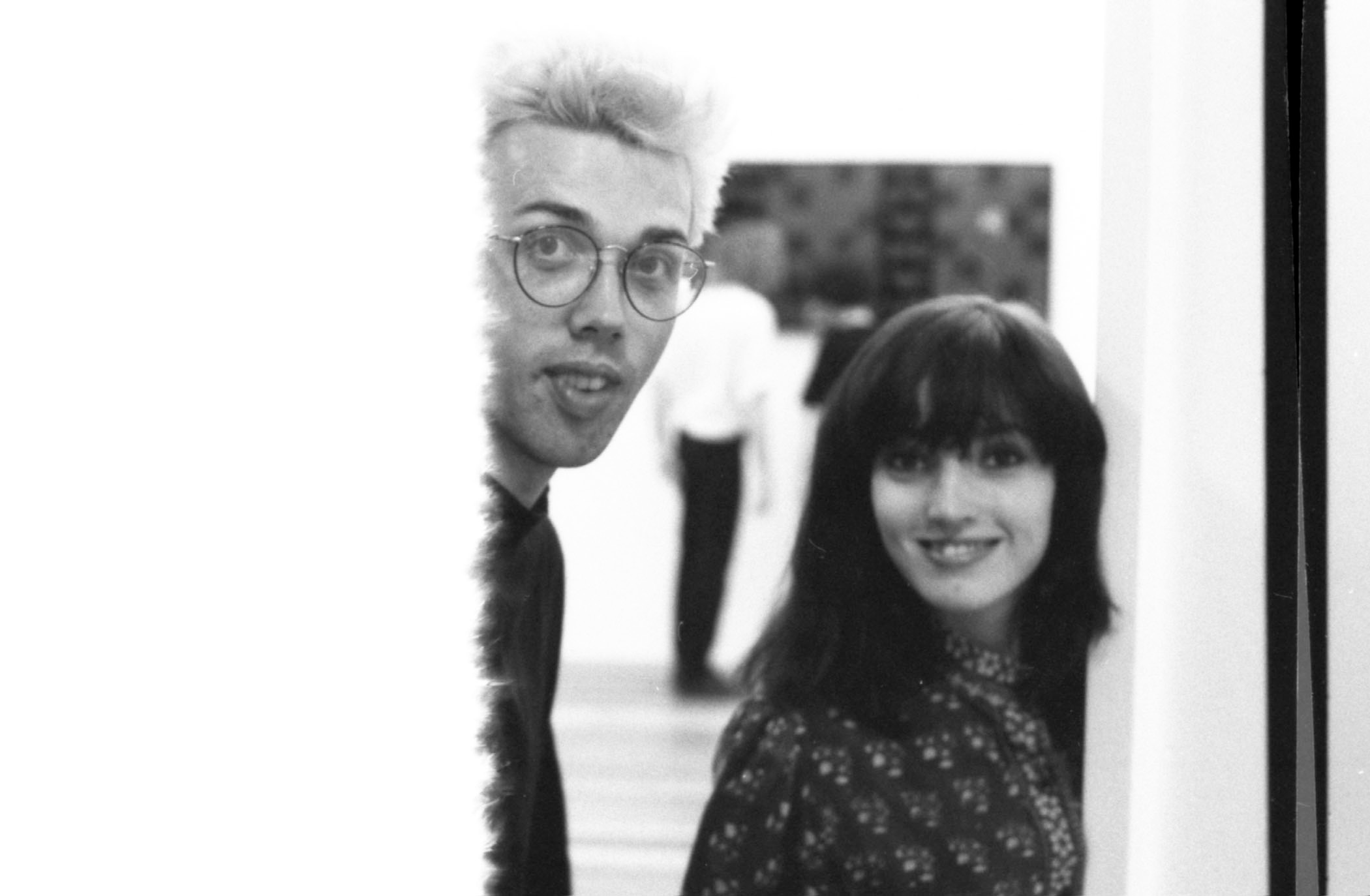 Imagine That a group exhibition of That Space artists staged at M.O.C.A South Brisbane in 1987 with artists David Stafford and Angelina Martinez 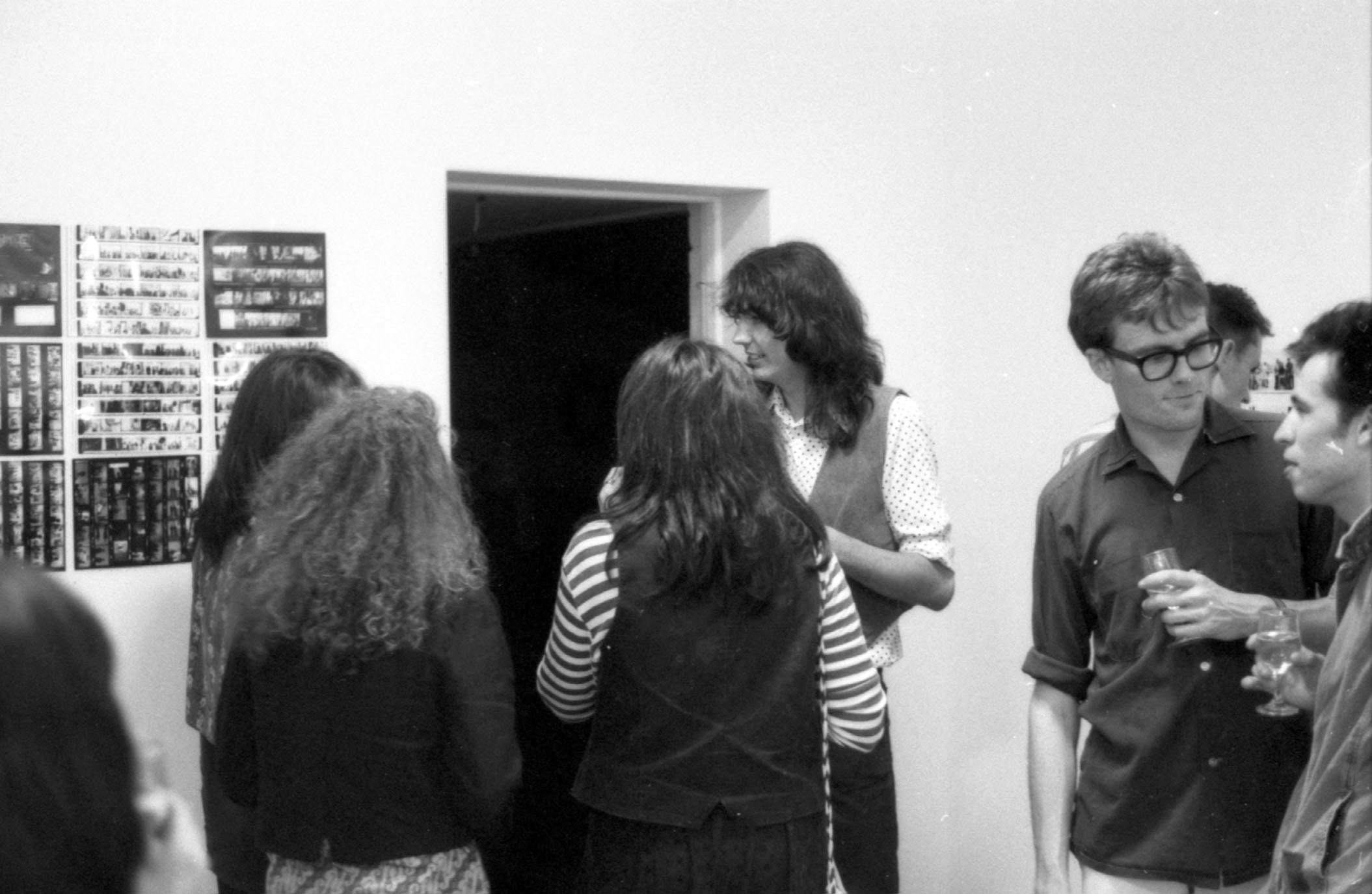 Imagine That – an exhibition by artists at That Space December 1987 at the Museum of Contemporary Art [MOCA] South Brisbane with gallery goers Martyn Sommer, Angelina Martinez, Pat Ridgewell and others- Photo: A Shared Camera Photograph