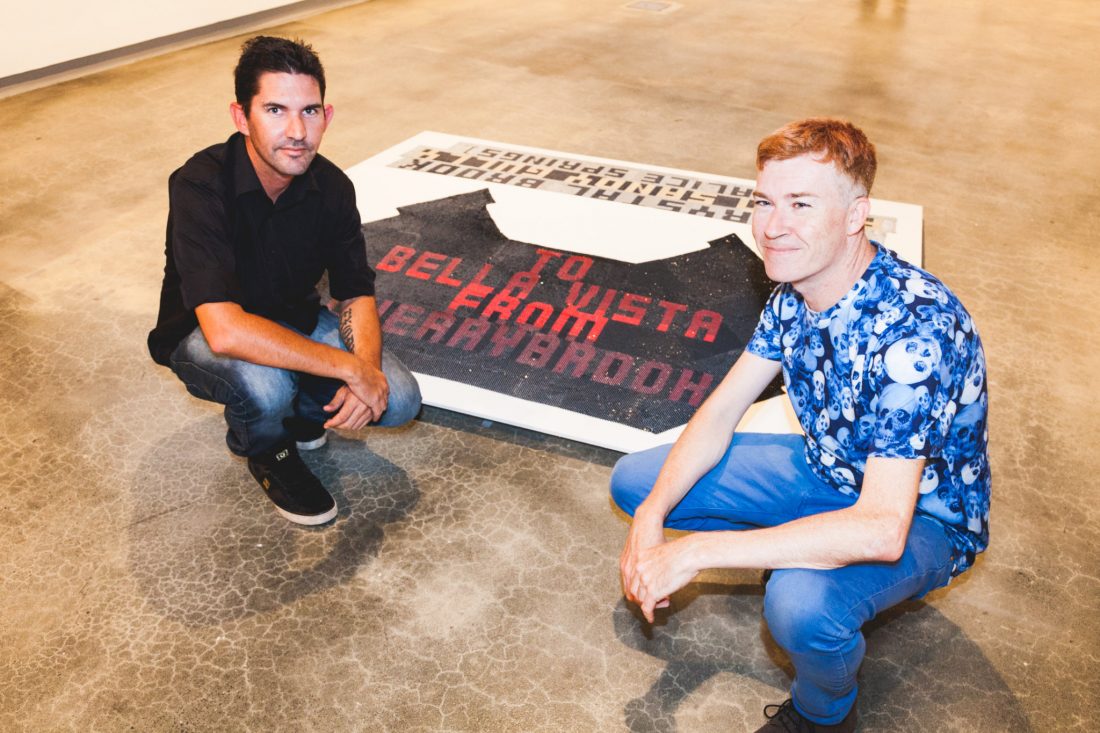 I left home in 1992 aged sixteen to pursue dealing with ‘coming out’ and art school.

My first residence was renting a dirt-floor room underneath a stilted house in Cannon Hill. It was a creepy experience and it was abusive. When I started uni in 1993 I did a couple of short stints at Aboriginal hostels in New Farm, and then a couple of terms in an Aboriginal Youth Hostel at Enoggera that also housed other indigenous students. For the next couple of years I paid minimal ‘percentage-rent’ in a shared dwelling in South Brisbane that was set up to house vulnerable queer youth.

These community dwellings brought friendships, and part of our culture of friendship was ‘going out’ participating in culture – seeing art exhibitions; dressing-up and going ‘clubbing’, where we danced and were exposed to music and performances of gender art in the form of ‘drag’; went shopping together in second-hand music and book stores, markets and thrift shops – being exposed to artifacts and learning cultural histories.

The exposures formed a life-long engagement with the visual arts and queer cultural sectors, a passion for histories, cultural interconnections and intersections, and the manifestation of new ideas.

After residing in formal community dwellings I signed leases for multiple shared rental lettings in South Brisbane, Highgate Hill, and East Brisbane, before moving to ‘Gay Farm’ , where I lived my final years in Brisbane: Bowen Terrace, then the Avalon building on the corner of Brunswick and Harcourt Streets. Avalon offered affordability to live alone, an opportunity to engage with artist friends who resided there, and a close walk to where ‘the action’ was; that is the multitude of arts and queer venues.

During this time I was part of an arts scene centered in the Fortitude Valley and CBD area. I was a high-frequenter of artist-run initiatives (ARIs) and other spaces that were fostering artistic and community development: Institute of Modern Art, Smith and Stoneley, Fire-Works, Craft Queensland, ISN’T studios, Metro Arts, Soapbox Gallery, Satellite Space, and Queensland Artworkers’ Alliance.

Having visibility in this scene also led to relationships, and one of those many relationships led to an ARI project at The Butterfactory in the nearby ‘rural’ town of Dayboro, it was a two year artist-run space withing The Butterfactory called XB installation that was operated by Brisbane artists who opted for working outside of the city . At all these places I got to meet many and various interesting and wondrous people – some of which, I recall, were very kind to me. It was a good environment for me to be in as a young person. I felt a sense of belonging, perhaps not so dissimilar for what social media has provided for many artists in the twenty-first century.

I did some volunteering at Queensland Artworkers’ Alliance, researching content for ‘opportunities for artists’ handbooks, as well as the Institute of Modern Art where I created a catalogue system for its books and other published matter. It was also during this period that I had the opportunity to be on my first board – an opportunity for a young person to be exposed to the workings of governance.

The existence of ARIs was a crucial part of the arts and cultural mix of my time in Brisbane as an artist. I exhibited work at Soapbox Gallery, Satellite Space, and XB Installation. Although low budget and experimental, the central themes of these exhibitions have continued to permeate and sharpen focus throughout my practice.

I am still in contact with many artists and arts workers from my adolescent art years in Brisbane, and have since collaborated through writing, exhibiting, or curating their work into more sophisticated research-based exhibition projects. Being a young, emerging artist in the 1990s, ARIs contributed to my idea of community, which underpins my worldview.

I have a good collection of images, invitations, media campaigns, correspondence, and narratives from the 1990s in Brisbane. This project seems like a great opportunity to not only archive this material, but to also contribute to a reflective discourse into the Brisbane visual arts scene in the 1990s, and create an everlasting document of my early practice within a socio-cultural context.

The current growth and interest in ARI spaces and projects excites me because it cultivates certain kinds of creativity, alternative to commercial and public galleries and even Contemporary Art Organisations in Australia.

I undertook ‘art school’ at Queensland University Of Technology at Kelvin Grove Campus, and its first year Studios in Grey Street, South Brisbane.

‘Gay Farm’ is a colloquial term for the Brisbane suburb of New Farm because of its high-density population of gay men.

Artists Sharon Jewel and Hollie developed and ran the initiative XB Installation at The Butterfactory artist-run studios located in Dayboro in 1999 and 2000. The XB Installation was funded RADF, Arts Queensland.