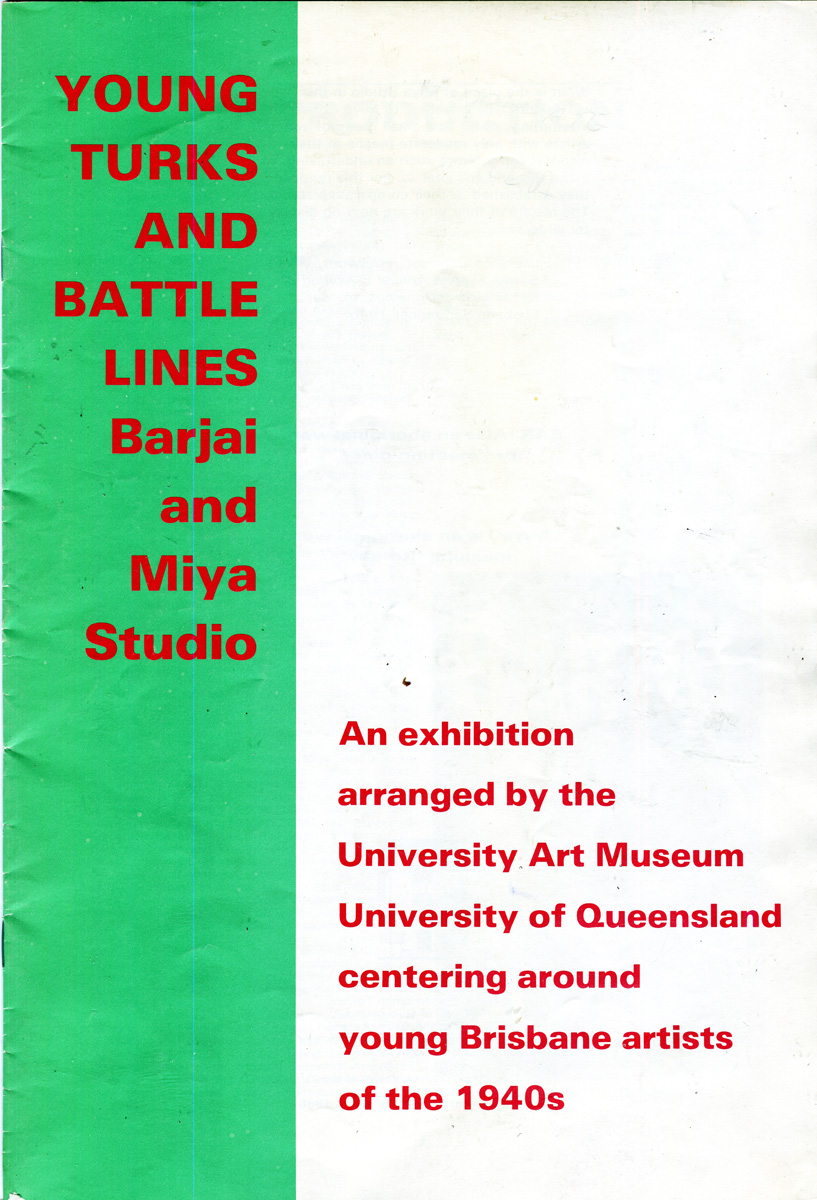 An exhibition curated by Michele Helmrich 1988 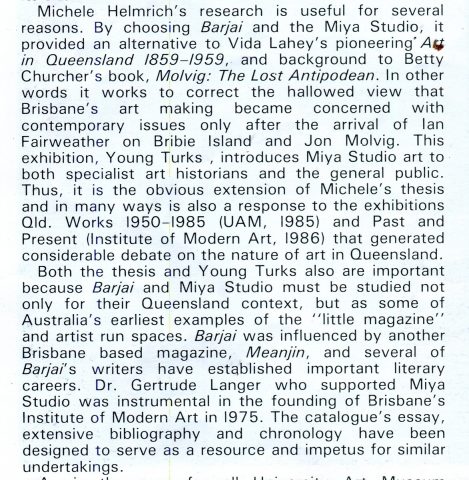 The Barjai and Miya Studio exhibition staged in 2016 played an important iterative role, where art works and the clarifying role of artists’ ephemera where essential to expand, nuance and update the University collection of art works and information resources. This 2016 exhibition making iteration built out from the earlier 1988 iteration curated by art history scholar Michele Helmrich titled: Young Turks and Battle Lines, Barjai and Miya Studio: An Exhibition Arranged by the University Art Museum, University of Queensland, Centering Around Young Brisbane Artists of the 1940s held at the Museum from 21 September to 4 November 1988 (Helmrich, 1988). In May 1988, Pamela Crawford had donated a large number of artworks safeguarded in the Jim and Pamela Crawford private collection from the Miya Studio years to the University of Queensland Art Museum. And in 1997 a collection of 11 boxes with contents ranging from the 1917 to 1997 timeframe including playscripts, work in progress notebooks, correspondence, newspaper cuttings about Barjai and Miya Studio, aboriginal rights, miscellaneous ephemera, articles and art exhibition catalogues were gifted to the Fryer Library collection.

Anderson, M.E., 1987. Barjai, Miya studio and young Brisbane artists of the 1940s: towards a radical practice.

In 1945, at the close of the Pacific war, a group of young Brisbane artists formed Miya Studio, named after an Aboriginal word for ‘today’. Founding members Pamela Seeman, Laurence Hope and Laurence Collinson, together with Cecel Knopke, organised studio space and encouraged artists to respond to the challenges of the contemporary world. In Collinson’s catalogue preface for the second of the group’s five annual exhibitions, he critiqued the local art scene, stating ‘The members of Miya Studio are attempting, as far as a small group of young artists with only moderate means at their disposal can attempt such an undertaking, to make this arid soil vital.’ Barjai (‘meeting place’), a Brisbane-based magazine for literature and art aimed at a young audience, shared and supported their ideals.

This exhibition revisits these endeavours with a focus on The Miya Studio Archive, which Pamela Crawford (née Seeman) donated to UQ in 1988.